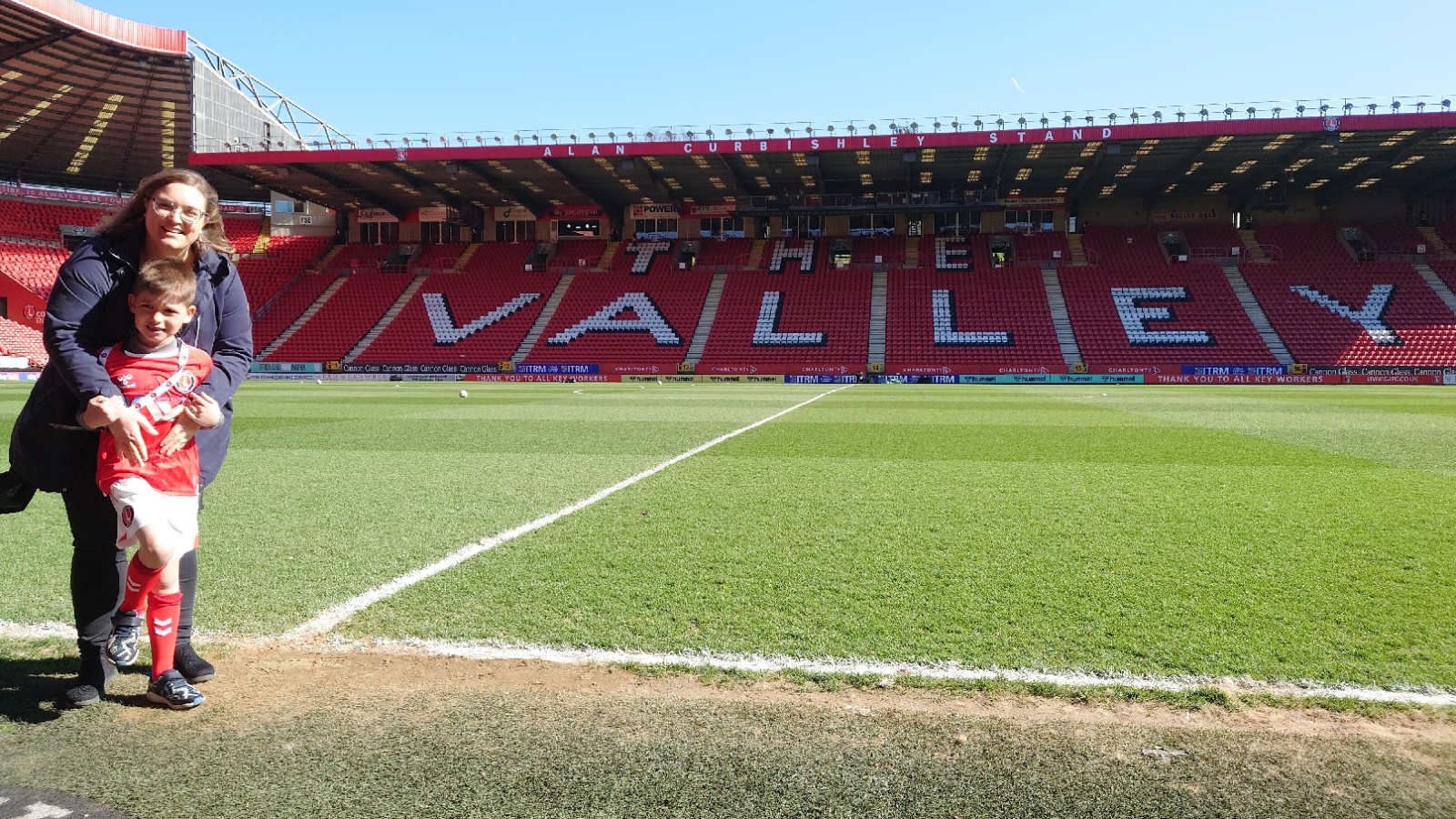 He enjoyed it so much that he began drawing the Charlton logo everywhere and jumped at the opportunity to be one of the mascots for the Addicks win against Burton Albion last month.

Timothy is a Year Two pupil at Bishop John Robinson CofE Primary School in Thamesmead and got the opportunity to come and watch Charlton through the Fill The Valley ticketing initiative.

Headteacher, Matthew Harris, said: “Timothy recently began to show an interest and natural flair for football. He came to the football on the game against Oxford having never seen a football match before – he didn’t watch matches at home.

“As he climbed the stairs to enter the stadium, his jaw dropped, his eyes widened and the sheer joy on his face was a picture. He loved every minute of the game – the skill, the missed opportunities, the team work, the chanting, the songs and the hotdog! Within those 90 minutes, despite the defeat, Timothy had found a place in Charlton’s fan base.”

The Addicks lost that day and while he was upset that didn’t stop him creating a number of sketches and drawings of the club logo.

What Timothy didn’t know was that his headteacher and mum were working with the club for him to become a mascot for Charlton’s game against Burton Albion.

“I discussed with his mum about telling Timothy the big news,” Mr Harris said. “We agreed to not mention anything until his kit arrived. It was then wrapped up and given to him as a 'present from a new friend!' with a note with information about the match. I believe the expression used to describe his reaction to opening the present and reading the note was ‘utter delight’!

“He tried the kit on immediately, posed for pictures and then spent every moment wearing it. There has been a discussion at the school gate about wearing it under his school uniform on more than one occasion. We explained a little more about the day, and that part of it would include going onto the pitch to play football – he genuinely did not believe that we meant the actual pitch inside the stadium and I don’t think it fully sank in until he was inside the stadium and I was helping him put on his boots.”

The day itself came with Timothy attending with his mother and headteacher and when it came to walking out with a player, he was able to walk out with his favourite, Craig MacGillivray.

Mr Harris added: “Timothy loved playing on the pitch with coach Bob – I think for him the awe and wonder of being inside the stadium again was just magical. Timothy also loved the drums, chants and songs from the supporters – joining in with as many as he could throughout the game.

“Since the game he re-enacts the goals, the saves, the tackles, the songs and chants from the day, he refers to the burger he had, meeting Harvey and Floyd [the club's mascots], playing on the ‘actual real pitch with the real grown up footballers!’ and that 'Charlton are the champions'.”

It won’t be the last time pupils from the school come to games at The Valley.

Mr Harris said: “I absolutely loved it, and hope to continue bringing school groups to many more matches in the future. I am so impressed with the friendliness of the stewards and staff, how easy it is to get to, from and around the stadium, and also that the fans in the stadium keep their language clean – I’ve now been to a couple of matches with pupils and have been grateful and thankful that the fans cheer, sing and call out, but without profanity or insult – it certainly makes it easier for me to encourage the pupils to join in, without trying to filter or explain new vocabulary.”

The Addicks are back at The Valley on Saturday. Click here to purchase your ticket.