Charlton Family to march at Pride in London 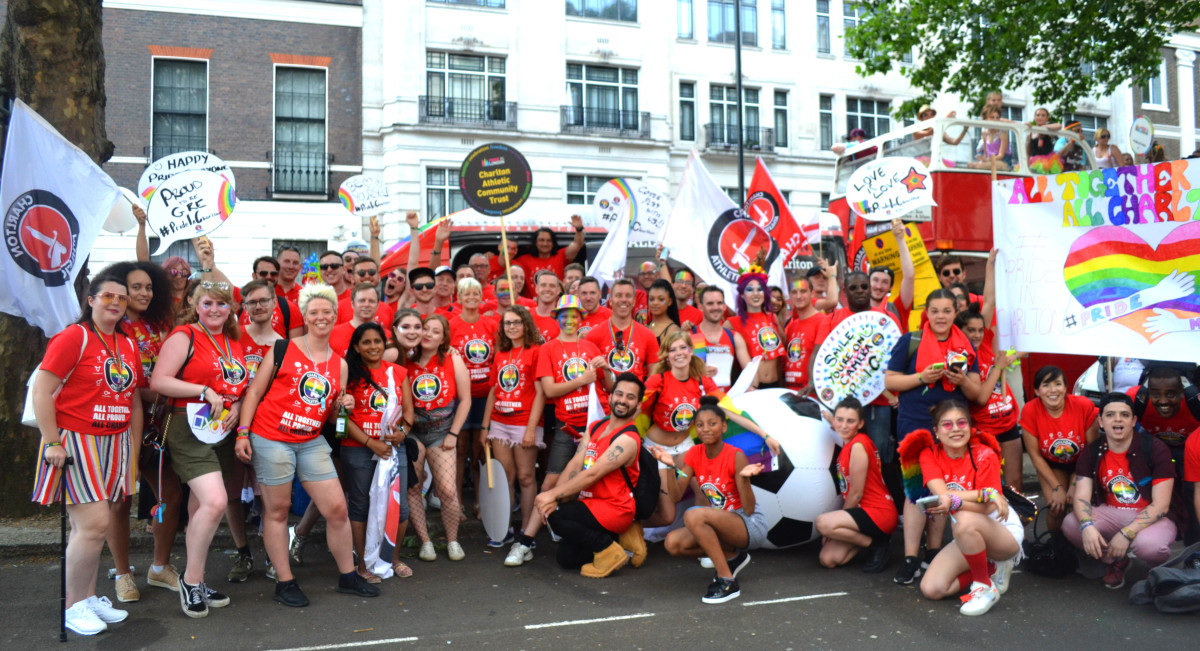 On Saturday 6 July, the Charlton Family will march at the Pride in London parade for the second year in a row.

The Proud Valiants are Charlton's LGBTQI+ friendly supporters group and chairperson Rob Harris explained why it is important to him.

"Saturday, 6 July will see the Charlton Family taking part in this year's Pride festival. It is remarkable to think that the first Pride took place 48 years ago (when it was and continued for many years to be a demonstration), with just 2,000 participants. Last year there were 30,000 marchers representing 500 groups and over a million people lining the streets of London. This year will be even bigger and you can join us on the day.

"Last year we had 70 people taking part in the Charlton contingency and it was remarkable. Details on how to join us this year are at the end of article.

"The Pride Movement began in 1969, when the police in New York made one of their regular raids on The Stonewall Inn in NYC. These events normally involved persecuting the patrons of the bar for drinking in an establishment known for gay clientele, these people would be evicted sometimes with violence and their details would be printed in local papers.

"One particular evening the drinkers in the bar decided enough was enough and they fought back with fury and from that the fight for LGBTQI equality began.

"Since 1969, we have seen many advances in the LGBTQI movement. I know many people ask why do we need a Gay Pride March or LGBTQI Supporters groups, we don’t have straight Pride? The fact the question is asked - justifies the need. Also, in the last few years the number of hate crimes against LGBTQI has increased and Transphobia/Homophobia is on the rise again.

"One area that there has been a great development is with the rise of LGBTQI football supporter groups, many affiliated to their local clubs. It is with real pride - I acknowledge Charlton Athletic as one of these clubs and through the amazing work the Proud Valiants do with Charlton means we are a club that many other fan groups hope to emulate.

"The Proud Valiants was one of the early groups to join Pride In Football (PIF) and since being recognised by many as a leader in the field, in conjunction with the club, we have been offered the chance to speak at Parliament, run various awareness events - including professional dedicated matches as part of the Football v Homophobia (FVH) month of action -, and also the fantastic annual Charlton versus Homophobia Tournament - which next year celebrates it fifth anniversary.

"Charlton Athletic Community Trust (CACT) are big players in fighting for equality for all - not only have they affiliated and given huge support to our events - they also were fundamental along with my Vice Chairman - Gary Ginnaw - in the formation of Charlton Invicta, our sister group - who were the first LGBTQI friendly football team affiliated to a professional club.

"There are some great organisations out there fighting for equality in sport for including; Fans For Diversity, The Football Supporters Federation, Pride In Football and Football Versus Homophobia in the making sure that one day equality will be achieved.

"Charlton is a club I have loved for many years. Every match (no matter how challenging) makes me proud and the work we achieve gives me great pride. On Saturday I wear my shirt proudly as I know we have a great stadium with amazing fans. It's an incredible feeling to know my club is head and shoulders above others and with The Trust, CACT Invicta and ourselves will continue to combat prejudice and discrimination and keep The Valley a place where we watch football for all."

Should you wish to join the Charlton Family at Pride, please email Michael.Seeraj@cact.org.uk for more information.