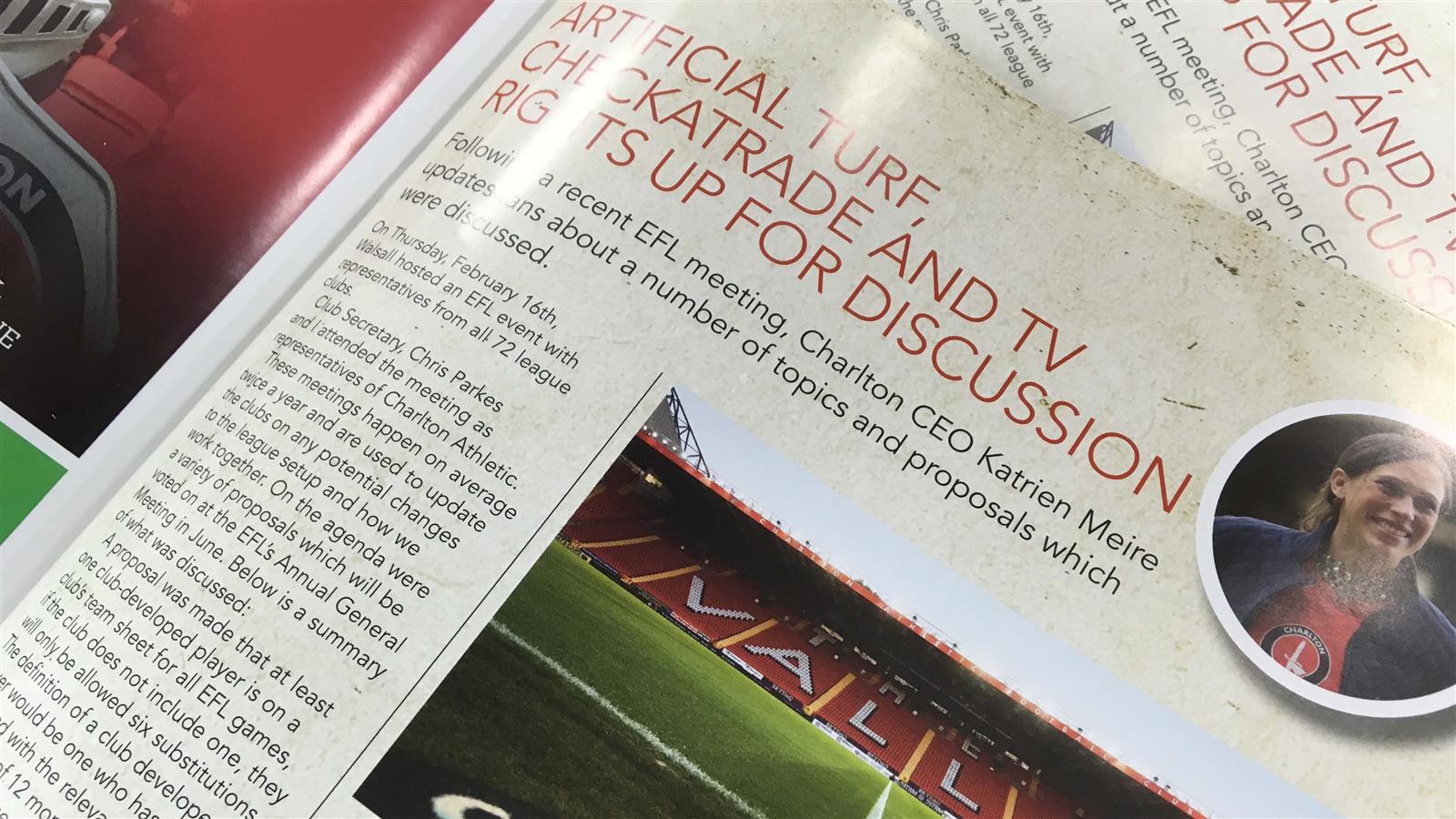 Charlton CEO Katrien Meire penned a column in Saturday's edition of Valley Review to update supporters on a number of topics that were discussed at a recent EFL meeting...

On Thursday, February 16th, Walsall hosted an EFL event with representatives from all 72 league clubs.

Club Secretary, Chris Parkes and I attended the meeting as representatives of Charlton Athletic.

These meetings happen on average twice a year and are used to update the clubs on any potential changes to the league setup and how we work together. On the agenda were a variety of proposals which will be voted on at the EFL’s Annual General Meeting in June.

Below is a summary of what was discussed:

A proposal was made that at least one club-developed player is on a club’s team sheet for all EFL games, if the club does not include one, they will only be allowed six substitutions. The definition of a club developed player would be one who has been registered with the relevant club for a minimum of 12 months prior to the end of his U19 season. We have a fantastic academy at Charlton and have had 11 club-developed players represent us this season. We think it is important for a player’s development that they get the opportunity to play first-team football and we fully support this proposal. In the discussion most clubs were supportive of the proposal but wanted more time to implement change so it may be that we don’t see this implemented until the 2018/19 season.

A proposal was made to increase the number of home-grown players on the teamsheet from six to seven. We intend to support this proposal.

A proposal was made that there is to be no artificial surface within one metre beyond the touchline or goal-line. This proposal has been made for health & safety reasons and would affect Charlton with us having to make changes to the side of the pitch. The health and safety issue is the change of surface. Other clubs affected have estimated a cost of £50,000. The proposal was heavily opposed with questions raised on whether a muddy touchline is any better for injury prevention. We haven’t had any concerns from players on the topic. For these reasons, we intend to oppose the changes. An indicative vote was held on the day and clubs opposed it.

Last year at the EFL AGM, we voted against the introduction of Premier League youth teams into the Checkatrade Trophy. The topic will come up again at this year’s AGM and we were reminded at last week’s meeting to submit views about our experience with the Checkatrade Trophy for discussion in a special meeting in April. Our current position is the fact that it doesn’t become appealing for fans until the latter stages which means that there isn’t a lot of merit to the competition. We’re looking to vote the same way as last year but would welcome any fans’ views during the next week.

The other topic that was discussed in detail was broadcasting rights. Another club produced an in-depth report which forecasts a significant increase in revenue for all EFL clubs. Charlton have asked to meet the EFL’s newly-appointed media rights advisors to be included in the process of the decision making regarding the packaging of the rights. We’re looking to continue to work with the EFL and other interested parties to input where needed.

We have our views on how we’re looking to vote on the various topics in June but we want to hear fans’ input to ensure we are representing the whole club. Fans can email fans@cafc.co.uk.