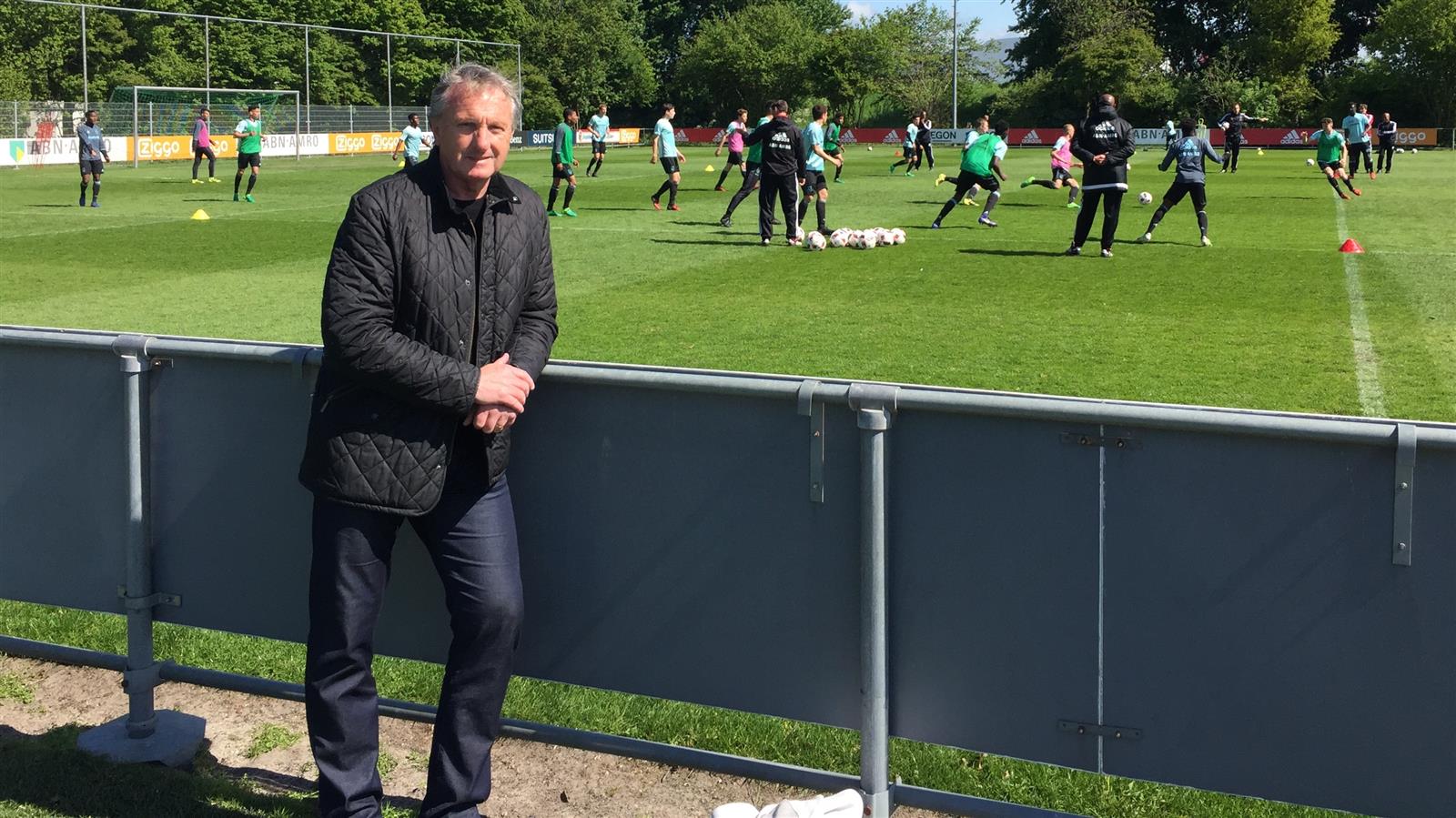 “The names hit you, it starts with Cruyff but then you have the Rijkaards, the van Bastens, more recently the Bergkamps, the Van Der Sars, Marc Overmars, so all of these faces are hitting you as you arrive,” Steve Avory’s face glowed with excitement as he explained his first impressions of Ajax’s world famous training ground De Toekomst.

He continued: “They have the 14 rules of Johan Cruyff up. It’s just as the players are going upstairs into the classrooms, so every player sees it every day.”

Charlton’s Academy Manager visited Amsterdam earlier this month with club CEO Katrien Meire, where the pair received a presentation on “the Ajax way”, a tour of their training ground and watched the first team in action.

“I’m always interested in visiting other clubs and it is something both Katrien and I do throughout the year,” Avory explained before adding that this season he has taken the opportunity to look at category one academies in the north of England, visiting Manchester City and Liverpool. These visits were in addition to his regular trips to the training grounds of London clubs such as Arsenal, Tottenham Hotspur and Chelsea.

He continued: “I’ve been abroad before to some big clubs but despite the club’s legacy and reputation for bringing through so many great players, I’ve never been to Ajax. Through Katrien’s contact, it was set-up for us to go out there for two days, I could have spent a week there. I feel I’m still learning after all my years in the game around youth development.”

Avory became the club’s Academy Manager in August 2010 and has been influential in maintaining Charlton’s successful development of young talent. During the 2016/17 season, 13 Charlton academy graduates played for the club’s first team, including Ezri Konsa, who on Tuesday was called up to the England U20 squad for this summer’s Toulon Tournament.

Konsa is set to become the ninth Charlton player to represent England at the prestigious competition. In addition, this season Charlton’s Under 23s were crowned Professional Development League 2 – South champions and the Addicks continue to enjoy success in the youth leagues. Avory explained the success of the academy comes from a philosophy not dissimilar to what he witnessed at Ajax.

He said: “We feel there is a very clear pathway for our young players that we’ve created that is quite strong, particularly at the moment. We want to maintain that. To go to a club with a similar philosophy, that has worked on those ideals for years of producing their own players and being so successful, I found the whole trip to be a learning and educational exercise but also inspirational and satisfying because it related so well to the culture that I think we’ve got here.”

He said that the trip had stimulated thought adding it was interesting to hear how the club link in closely to all the schools the players go to. In 2012, the Charlton Athletic Academy partnered with the neighbouring Harris Academy.

This saw Charlton youngsters, including current first teamers Konsa and Karlan Ahearne-Grant, going to school at the Harris Academy, allowing them to train for four afternoons a week at the club’s Sparrows Lane training ground. Avory said there was a similar system in place at Ajax where all the young players are bussed in four days a week from a 45-minute radius with the club using 20 minibusses in total.

“They’ve been to school, they’ll come in, they’ll train and they’ll have more education in the facilities of the training ground where they have tutors that are brought in,” he said. “What they’ve got there as an education project is not too dissimilar to ourselves.”

The Charlton Athletic training ground is currently undergoing a multimillion pound redevelopment and Avory stressed that it is important that, as the training ground grows, the club manages to emulate Ajax in maintaining the same friendly, welcoming atmosphere.

He said: “We both thought how welcoming and how friendly people were wherever you went. Whether you were talking to security, groundstaff, etc. I’ve always thought that one of the attractions in our environment, that has been a big factor in me enjoying my time, is everybody knows everybody and everybody has time for everybody. I certainly didn’t create that culture, it was there when I came in, I noticed it straight away and it’s been maintained. Maybe the size of our training ground has helped and going forward, with all the work going on, we need to make sure we maintain that.”

Avory was struck by the legends now working at Ajax. “There is a big emphasis on ex-players. Not all, but they like to get players in who know the workings of the academy and the DNA, ‘the Ajax way’ as they call it. So, the former players are welcomed back. What is clear is that they’ve got a certain profile at the club that people who come to work at the club have to fit. I spent quite a bit of time talking to someone I didn’t recognise, eventually I asked him what his role was and he was the U19s coach, Aron Winter (former Dutch international who played for Lazio and Inter amongst others). There is a longevity with the staff, some of those staff have been there quite a few years and that’s important in young player development.”

As well as a longevity of staff and a continuity in style, Avory, who has worked at Charlton since 2001, explained that the changing world of football finance has forced Ajax to adjust how they do things. He said: “They’ve had to adjust their model at the top end as for them now it is so much more difficult to keep hold of their top players past a certain age. You come to 20 or 21 and a player is successful in the first team, the chances are he’s going to leave to go to Germany, Italy, Spain or England.

In the past, they stayed on a bit longer because they were so successful and because the Dutch league was seen more on a par with the other leagues but the fact is that money has gone in through the TV deals into these other countries and the money has become such a lure for the players. They struggle, as a lot of clubs over here would, to retain the best players beyond a certain age.”

While on the trip Avory and Meire watched a youthful Ajax side take on Go Ahead Eagles in an Eredivisie clash. “We watched them play in what was a comfortable victory against a team already relegated,” Avory said. “What impressed me was how young the Ajax team were. On the day, the average age was 21. Some players were rested because of Europa League commitments but their average age week in, week out is only 23, so evidence is there straight away of their investment and belief in young players, that was before we even visited the academy.”

Avory concluded: “There is a clear message on what it takes to develop as a player and a person and I felt from talking to people walking around the place, looking at various points on noticeboards and the 14 rules of Cruyff, that there was a lot in alignment with our approach here.”