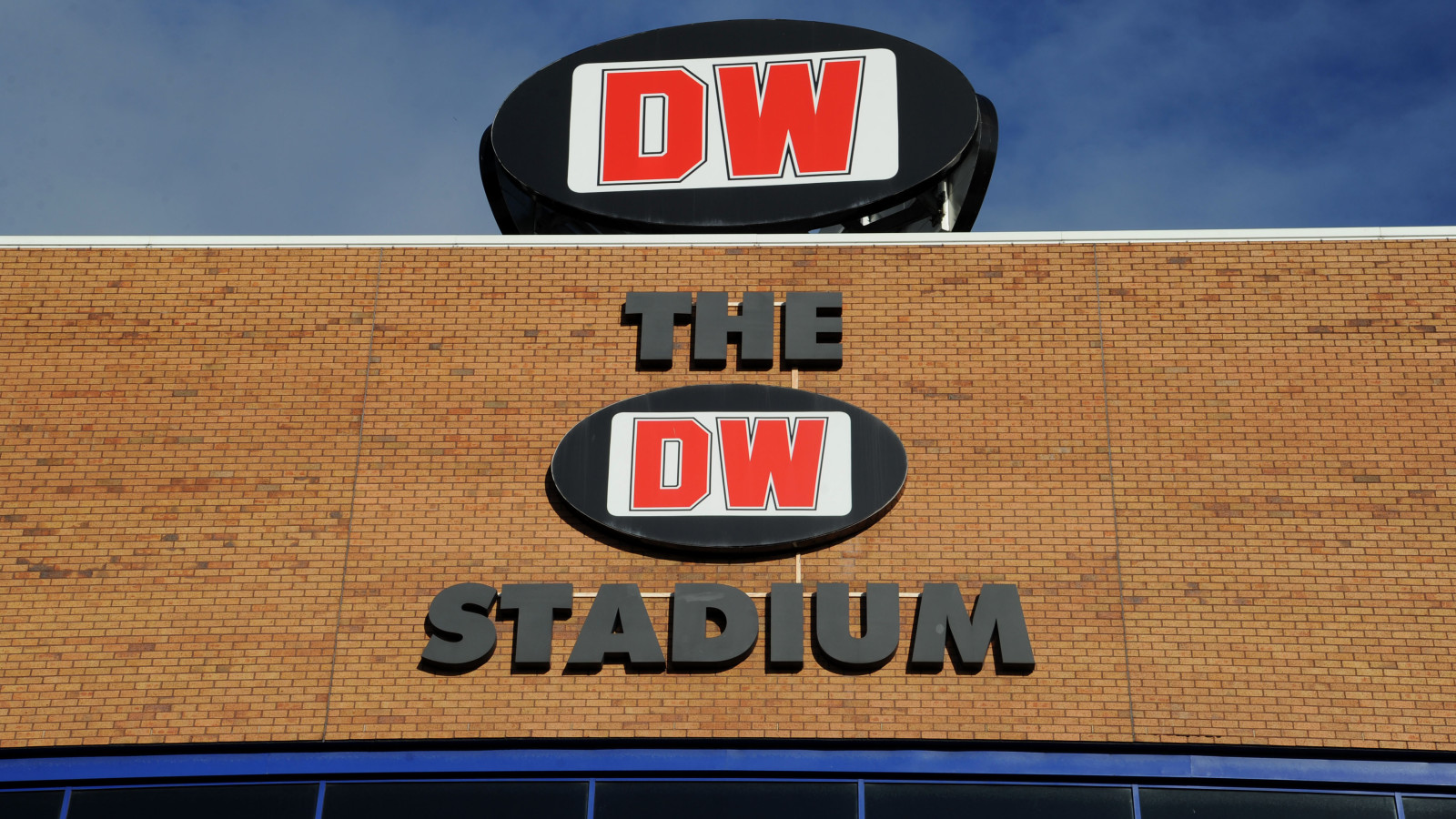 212 tickets had been purchased in advance for the trip to the DW Stadium on the night from just beside the turnstiles, priced as follows:

Well you certainly know what to expect, a) from the date it was opened and b), as soon as you clap eyes on the place. Yes, the edifice now known as The DW Stadium is the absolute classic out of town, four sides the same, plenty of space around it and naturally a retail/leisure park around it. The fact that the Stadium is shared with Wigan Warriors RLFC is probably a contributory factor but it just seems to lack a bit of identity.

Once inside, again, don't expect to be blown away in awe and wonderment but it serves its purpose totally and in terms of watching football provides all requirements. We are situated behind the goal in the North Stand in its lower echelons to the left of the goal as you face the pitch. There is a small recess between stand and pitch making the opposite end seem a bit distant, but it is quite a large playing area, in fairness. There are no impediments to the view of the pitch, entrance is at ground level and there are no massive climbs to be undertaken.

The concourse is, similarly, exactly what one would expect, albeit slightly smaller than some others of a similar layout - hopefully the TVs will be showing sport for all as opposed to in-house stuff alone.

Intrigued. Seemingly some delicacy called a pea supper pie is available inside the ground, along with a variety of other reasonably-priced foodstuffs, as well as alcohol. Outside the ground, as well as a coffee place inside Next, Burger King, KFC and Subway are on the retail park. For the traditionalist, there is an admittedly upmarket chippie called Sharpys which is behind the away end.

Within the end itself, right beside the entrance, is an excellent facility called the Marquee Bar, which is free to enter. Spacious, reasonably priced, good food and big screens, with the added bonus of a very convenient location! Alternatively, you could go bob bob bobbing along to The Red Robin pub, just a few minutes away, which offers a good selection of ales. There are plenty for all tastes in town and apparently Friday night in Wigan is quite lively.

It's a bit tricky getting back to London by train - well impossible - immediately after the game so no doubt those choosing to use this mode of transport will be staying over. The ground is a bit distant from the town as alluded to, but is quite visible. There is a bus stop at the nearby Asda which is a stone's throw from the ground and is served by routes 605, 606, 610, 631 and 632.

So if you're hitting the road, the Post Code is WN5 0UZ. However you choose to get there, leave the M6 at Junction 25.

Follow the slip road then turn left at the roundabouts, following signs for the A49 towards Wigan. Pass Sainsbury's and keep going to the Saddle Roundabout where you take the first exit, signposted A49, Standish, onto Robin Park Road past Asda and follow the signs to the DW Stadium. The third turning on the right is Stadium Way which provides access to the car parks at the stadium. Away fans have their own dedicated car park, which is Car Park 1, again just follow the signs then park up. For a quick getaway park towards the back of it.