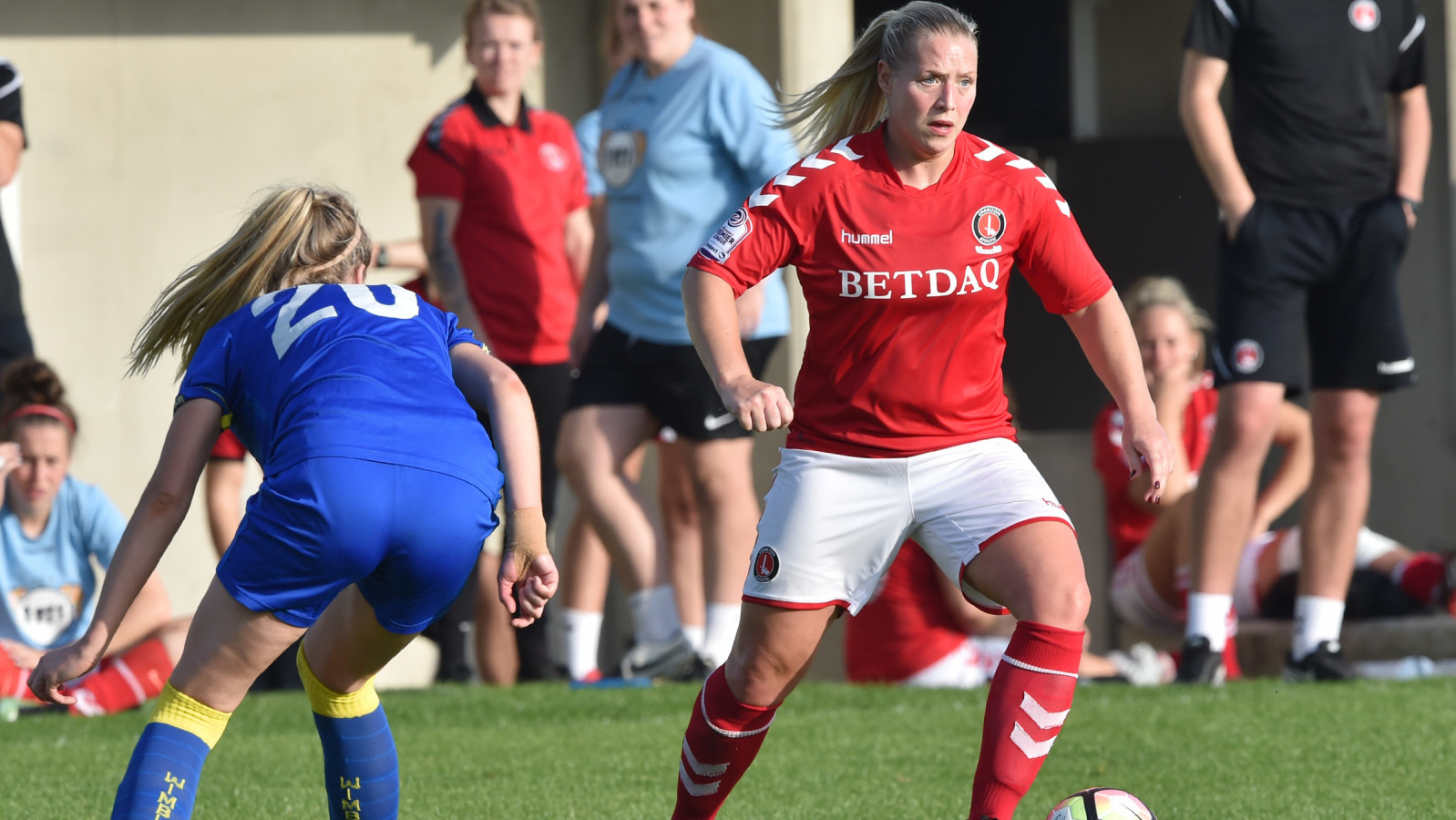 Every Tuesday and Thursday Charlotte Lee gets up at 4.30am to get ready for work and may not get to bed until 12midnight but you can bet she won’t be worrying about that when she walks out for Charlton Women in a rearranged FA Cup quarter-final on Sunday against Arsenal.

Charlton Women are the only third tier team left in the competition and face a David vs. Goliath cup tie against one of the behemoths of women’s football but for 32-year-old winger Lee, it is a long way from her day job.

“I’m a prison custody officer so everyday is different,” Lee explained. “I’m driving at the moment, custodies from police station to court, from court to prison or prisons to prisons. doing transfers. We’re London based but I could pick-up someone in the morning from a police station and they might be wanted in Birmingham, Manchester, Liverpool. There might be a warrant for them and we have to take them where they are wanted.

“Everyday is interesting, everyday is different. It can be quite scary, I’m not going to say it is not but as long as you have a good team with you, then the day becomes easier.”

The day is long but it is a sacrifice Lee is willing to make. She said: “I get up at 4.30am and start work at 6.15am and believe it or not we don’t actually have a finishing time. The day is a day and is guided by operational needs, so I’m on a 40 hour week but if I start at 6.15am, if I take a custody to Liverpool I might not get back until 10pm at night. With the company that I am with I’ve arranged on a Tuesday and Thursday (when the women’s team train) to finish no later than 5pm so I can make training but still it is a bit of a push for me to drive an hour home, eat something then leave to get here for 7pm for then training. On training days sometimes I get away from work a bit earlier and I have a bit more time indoors and sometimes it is just like ‘go, go, go’.

“I get home from training at say 11pm or 11.30pm, in bed by 12midnight and then I’m back up again at 4.30am so by the end of the week it is tough. It’s more mentally tough than physically and I get tired but I want to play football. I’m making a lot of sacrifices personally to still be part of the club and the team because this is what I want. Work is great, I love the job but I want to play football.”

Lee, who joined the club three seasons ago, made a first team berth her own this season and she explains the belief that Manager Riteesh Mishra, along with the support of her teammates is what drives her on.

She said: “Riteesh plays a massive role for the team. He’s laid back but he has that drive and passion in him that we all can see and feel and I think he brings the best out in the girls. For me Riteesh is a massive part for me as confidence. I’m one of the oldest girls now here and one of the reasons that I keep coming is because he believes in me and that makes me believe in myself because some days it is tough going to work, going home and thinking I’ve got training. You know the guys are sort of relying on you as well, you rely on them to make sure everything is sort of set-up but you don’t want to let them down and Riteesh is one guy for me that I personally do not want to let down. I feel that he’s working hard so we need to work as hard to prove to him that his work is not going unnoticed.”

Lee speaks with a smile on her face, she may be giving up a lot of time to be at Charlton Athletic’s Sparrows Lane training ground but she wants to be there and for her while the football is the main driver, there is also a real sense of community.

“There is a lot of competition for places. The girls are amazing. To be honest, one of the reasons that I come week in week out is to see the girls. I love the football but having good people and staff around helps because I probably wouldn’t be that dedicated to go to the gym on my own, so it helps having a good team. The staff are amazing as well. They provide us with a lot of support.”

Lee has been an important part of a successful Charlton team that is fighting on all fronts. As well as being the only third tier team in this weekend’s FA Cup quarter-finals, the Addicks are also chasing trophies in the Capital Cup and the Isthmian Cup. The team also sit atop the Women’s Premier South table.

In the immediate future though it is Sunday’s big game against Arsenal that Lee and her teammates are focused on and the game has caught the attention of some of Lee’s co-workers.

She said: “To be honest, some of the guys are really interested. A few of the guys actually support the Charlton men’s team and they do ask me how things are going. One of the guys heard that we’ve got Arsenal coming up and he said he might come down and watch. I don’t really talk about it though because I go to work to work. I think football is my downtime to relieve all the work stresses so I just keep things separate if I am honest.”

And while Lee will be looking to relieve the stresses of a working environment, you can see there is a real excitement to her about getting the chance to play against full-timers and some of the best players in the world.

“I am very excited (for the Arsenal game),” she said. “It is going to be a great opportunity not just for myself but for the whole team, from management staff to the girls on the field, even on the bench, it is going to be tough but if we go out with a great attitude, hopefully we’ll have a chance to show what we’re about and how hard we have worked this season to get where we want. We’re still in a great position in the league, we’re still in quite a lot of cups and I think it will be a great day to show what everyone is working towards because we want to step up into the Women’s Championship, so it will show what we are doing behind the scenes.”

The Women’s Championship is the rebranded second tier of women’s football which comes into play next season. While the players focus on the games ahead, staff have had one eye on a bid they have submitted in an attempt to earn Championship status. It’s an important few weeks that will have implications on the progression of the club but for the moment, everyone is focused on Sunday.

Sunday’s game is at Boreham Wood and Charlton Women are hoping to get as many fans there as possible to back the team. Those that can’t make it can watch Arsenal vs. Charlton Women on Sunday (March 25th) LIVE on Valley Pass. For information on how to subscribe, click here.

Get your tickets for Sunday's game here