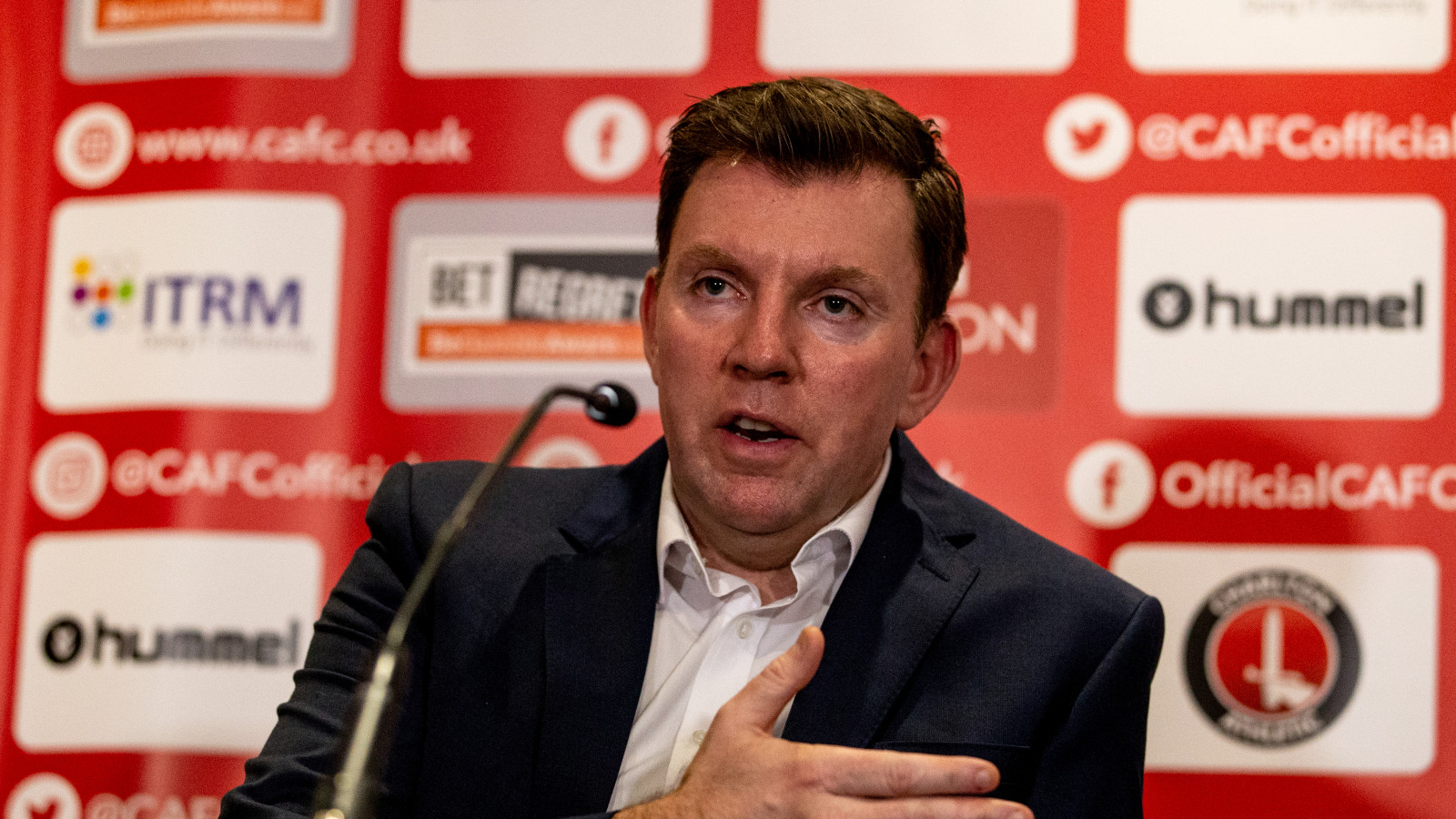 Charlton Director of Football Steve Gallen has provided an update on what has been a relentless summer to date, with four new signings as well as four contract extensions.

Tenacious midfielder George Dobson became the Addicks’ third acquisition of the summer, and Gallen was pleased to secure the services of the promising 23-year-old, who he admits he has tracked for some time, as the club seeks to bring younger players to The Valley.

“We do have to be careful about the players that we pick because there’s a lot of players available. There’s a lot of players out there that want massive salaries. They think that Charlton are just going to splash a load of money and we’re not going to do that; we’re going to take our time and we’re going to get it right. I’ve always tried to do that. I try and spend our money just like it’s my own and we have to be careful.

“If we blow all of our money right at the start on two or three players then we might not have enough for the two or three we need towards the end of the window, so we’re somewhere around the middle of the window. It’s tiring behind the scenes because it’s non-stop work, it’s every day. Every single day. We’ve got George Dobson in, really pleased. He’s a good lad and somebody I’ve followed for a few years now, and so it’s nice to get him.”

Jake Forster-Caskey and Adam Matthews have recently followed Jason Pearce and Ben Watson in penning new terms to extend their stays in SE7.

“You have to judge every deal on its merit,” explained Gallen. “Players that have been with us for a while... Chuks Aneke two years, Ben Amos on and off for three years in different spells... didn’t stay with us. We tried to sign them but it didn’t work out and I wish them well. Jake’s situation is a bit different, player of the year, that was great, and then got injured right towards the end. Very important that we show everybody that we look after our players. It wasn’t a difficult deal to do in all honesty. It was something that was just sat on the table for quite a while until Jake grabbed me at the training ground and we just had a chat, and then moved it forward really, really quick.

“Jake’s going to be out for a while, we know that. We’ve got a duty of care to look after him and bring him back to fitness, but when we do we know that we’ve got a very good midfield player. And when he does come back, whether that’s December, January, February… I don’t know exactly, we all don’t know exactly… it will actually feel like a new signing for us. Experienced football player, good awareness, good touch. He’s a midfielder that’s good at everything. He’s a good all-rounder rather than just being a box-to-box or a holding player, or just a passer. He’s actually decent at all things. The way he picks up second balls in particular, you can see he’s got a bit more experience than a lot of the other players at this level.

“I’m pleased to get Adam. This one behind the scenes has been a bit on, off, on, off, but then it was last year too. At the end of the day I have to try and get the best value always for the chairman, which is what I speak to Thomas [Sandgaard] about, and the best value for the football club. On the flipside, on the balance of that and more importantly of course, we’ve got to the best team. We’ve got to give Nigel Adkins the tools to try and finish whatever - top two, top six. But certainly that’s where we need to be as a football club, and so the more good players you can get the better of course. Signing Adam is like a bit of relief it feels, for me, and just a good signing and another one I think: ‘Right, done. Let’s move on to the next one’, because we have a bit to do. And I’ve mentioned this before, I don’t want to be signing 10, 12 players every summer. I want to be signing two or three and hopefully that’s where we’ll be next summer fingers crossed.”

Akin Famewo, meanwhile, became Nigel Adkins’ fourth capture of the window after joining on another season-long loan deal from Premier League outfit Norwich City, with Gallen delighted to have negotiated the option to purchase the central defender.

“That’s been going on before the season ended,” revealed Charlton’s Director of Football. “We wanted to sign Akin on a permanent, for whatever reason that hasn’t happened just yet but it’s a loan that we can turn into a permanent if everyone agrees to it during the season so we know that. And that’s something that I would like to do. I’ve made it clear always to Akin and his representatives, we and Norwich, that we want to sign him on a permanent. Just yet we haven’t been able to do that.

“The most important thing though for the team and the club, get Akin in, get him fit during pre-season and get him to start the season with us. He’s a good player, he’s a left-sided centre back with a left foot - there’s not loads to choose from. He’s young, he’s hungry, he’s strong, he’s quick, he’s not bad on the ball, he’s not bad in the air... there’s things obviously he needs to improve on, he’s only a young man. Hopefully he can improve on them with us and move forward with us.”

Gallen is pleased to see things starting to take shape, though, at the same time, admits and acknowledges that there is plenty of work yet to be done.

“You sometimes think what’s more important - is a right back more important than a right winger?,” he questions. “Is a left back more important than a centre midfielder? I can’t tell you that right now but what I can say is, and I’ve always believed this in football from my time before being Director of Football, get your striker right and get your goalkeeper right. If you can get that done at the start then you can start building around it. We’re building around it, we’re working on other targets and hopefully we’ll get them in.

“I want to continue to try and bring in good players to the club. What I also want to do is reduce the age of the team, the squad and I want to give some longer-term contracts out to the younger players in particular. That’s what we’re trying to achieve, but then on the flipside you have to recognise that Ben Watson has got a year’s contract, Adam Matthews now has got a year’s contract, Chris Gunter has got one more year, Jason Pearce is here for another year. These are good players at this level, they’re good experienced players and they’re great around the training ground. This is really important to the manager that he has the right people at the training ground, the right people supporting him and these are the ones that he wants and I completely agree with him. Let’s get these players in and so that’s what we’ve been working on the last few weeks.

“Everyone’s waiting almost for something to happen. I think what we all have to recognise is when someone’s contract ends, or say for Akin his loan move ends and he goes back to his parent club, he’s then on the lookout, or his representatives, for the best possible deal, the best possible club. And so everybody looks up, as you can imagine everyone’s looking up at the Championship - all our fans are, all our staff are. We’re looking up, we want to get back there, at least back there. A lot of players are looking at Championship options. There’s better wages up there, there’s obviously a better standard of football than in League One so you do have to be patient. You have to chip away every day. We know we’ve got a bit to do, I don’t need anyone to tell me that. The manager keeps reminding me of this all the time in a nice, positive way but we’re moving and I knew we would be.”