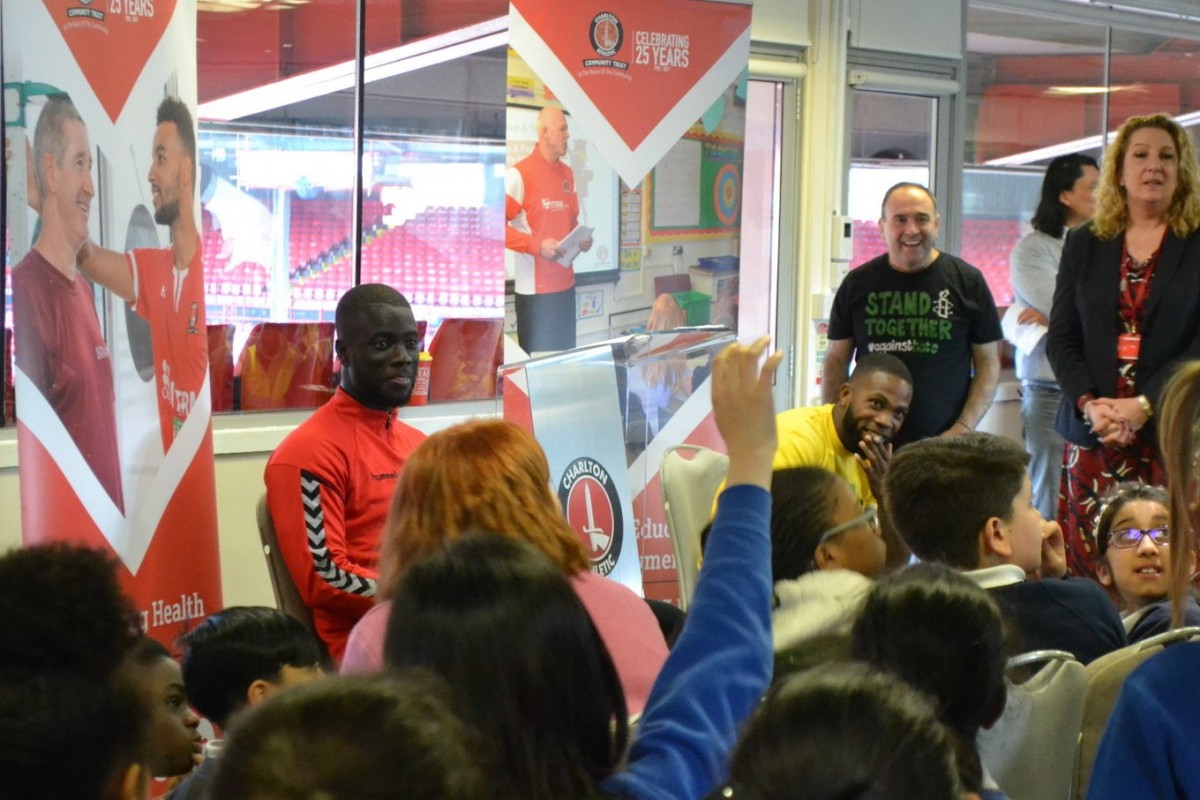 Pupils from six local primary schools in South East London took part in a day of workshops and activities at The Valley as part of the EFL’s Day of Action. Bringing together over 200 pupils in total, Charlton Athletic’s Day of Action was one of the largest events of the 72 clubs involved in the initiative.

Amnesty International and Kick It Out led workshops as part of the day. Former Addicks midfielder Paul Mortimer, now at Kick It Out, delivered sessions on equality and inclusion, discussing how everyone is different and introducing pupils to the nine protected characteristics in the Equality Act 2010.

Pupils were also given a tour of The Valley, during which they took part in CACT’s Primary Matters education workshop, which focuses on building positive relationships between pupils from different backgrounds, which was a huge success.

Amnesty led workshops on human rights, focussing on the experience of child refugees, and promoted its ‘I Welcome’ campaign. The campaign calls for a better international response to the refugee crisis and encourages people to work together to create more welcoming communities for refugees and people seeking asylum. The organisation has been working increasingly closely with a number of football clubs since launching its ‘Football Welcomes’ initiative last year.

Charlton Athletic players Naby Sarr and Mark Marshall also took part in workshops before answering questions from the young people present. Mark, a winger for Charlton’s first-team, is a new Kick It Out ambassador.

“This is an everyday occurrence at clubs like ours up and down the country, but the EFL Day of Action puts a media spotlight on what clubs do behind the scenes and the messages they carry to young people.”

Paul Mortimer, Kick It Out’s Professional Players Engagement Manager, was delighted to be a part of the day.

“As a former Addick, everyone knows that Charlton Athletic will always have a special place in my heart, so I was especially pleased to come to The Valley and deliver three equality workshops, alongside our new ambassador Mark Marshall, as part of the club’s EFL Community Day of Action.

“The young people really engaged with the session, listening carefully to both myself and Mark’s experiences of racism, as well as asking interesting questions about different equality issues. I think they would have taken away a lot from today and I’m proud of the work Kick It Out is doing working in partnership with our ambassadors and their clubs.”

“It was fantastic meeting the kids, speaking about different topics and seeing the excitement on their faces. Meeting youngsters aspiring to be footballers and other professionals was great.”

“It was a real privilege to be at Charlton FC for this important day, and wonderful to see it bring together so many local children to talk about pressing issues in sport and society.

“I was very impressed with the children’s understanding of fairness, equality and human rights, and their ability to empathise with child refugees, particularly those separated from their families.

“Football has an important role to play in helping people adjust to a new country and culture, and we’re delighted Charlton is taking part in Amnesty’s Football Welcomes campaign to celebrate the important contribution refugees make to the beautiful game.”

Naomi attended the EFL Day of Action with Amnesty school speaker Patricia Claudino, and Ghias Aljundi, from the ‘I Welcome’ campaign. The Football Welcomes weekend will be taking place on 21-22 April, with clubs around the country putting on activities and events for refugees and people seeking asylum to celebrate the contribution refugees have made to football since the Second World War. The initiative aims to highlight the role football can play in welcoming refugees and promoting integration.