“It can happen to anyone” - Charlton Athletic’s Chuks Aneke, Hollie Olding and Samuel Oguntayo join crime reduction workshops as part of EFL Week of Action 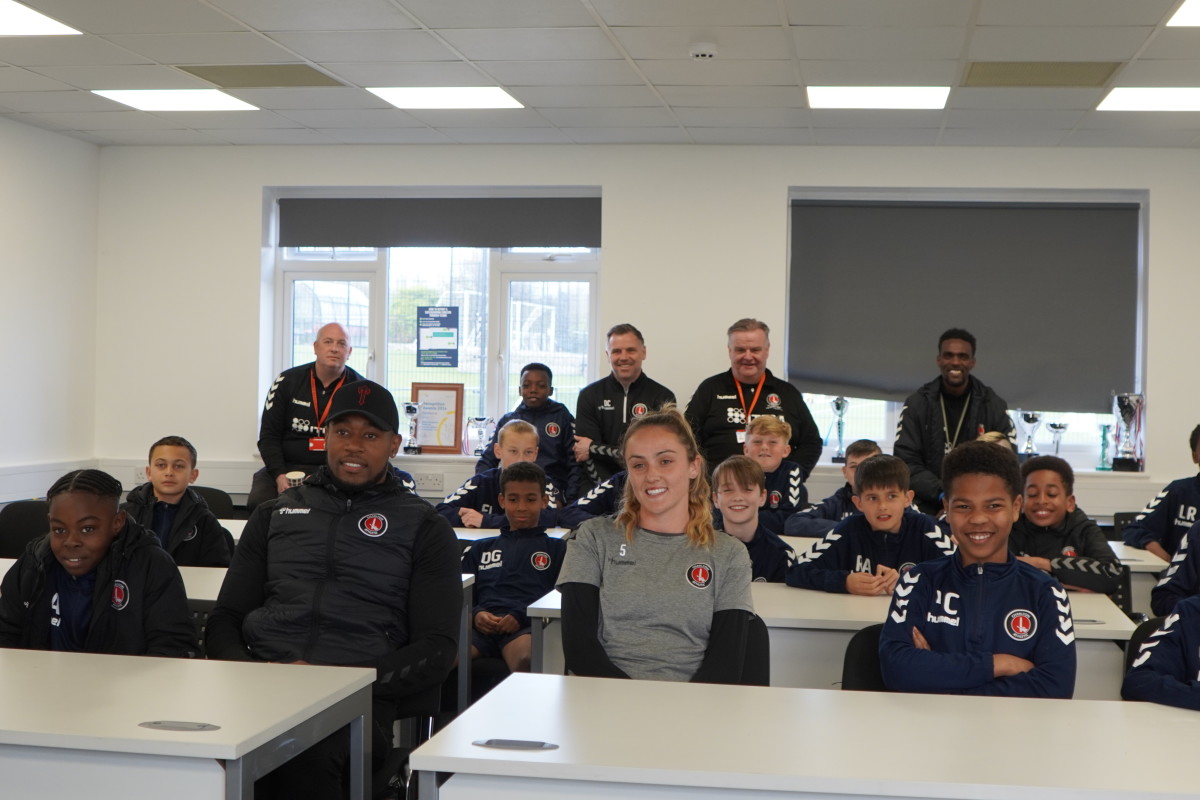 The interactive County Lines & Exploitation workshop by CACT’s crime reduction team covers the risks associated with drugs and gangs, ultimately aiming to avoid young people getting involved in county lines operations. Launched in January, the workshop has so far been delivered in schools across Greenwich and Bexley by CACT’s Crime Reduction team to more than 2,400 young people to encourage positive life choices.

Chuks Aneke and Hollie Olding attended a workshop alongside 20 Charlton Athletic Academy U11 players on Tuesday 5 April, sharing their own advice for the young people, as well as listening and learning from the group.

“It’s definitely important that players get involved in these initiatives because these boys look up to me so it’s good for me to be around them and be a good influence, a good role model for them.”

“From the workshop I learnt what the effect can be like on families and the wider impact it can have. You can do this one thing, run a bag up to Manchester or something, but that can have implications on the rest of your life. You can end up going to prison, meeting the wrong people, falling in with the wrong crowds. It was just really eye-opening and I’m glad I was here today.”

“The County Lines workshop was an invaluable insight to problems that exist in the modern world today, that unfortunately some young people experience.

“It was very well delivered and sometimes the messages were quite hard hitting but it gave the players an explanation of the issues involved, the terminologies used and strategies that can be adopted if any of them were to put in any of the situations explained.

“It was especially relevant to the age group delivered to as they are moving into senior school in the next academic year where some of these issues can affect young people.”

Other Academy cohorts will also be taking part in the workshops.

On Tuesday evening, Samuel Oguntayo joined a County Lines workshop with a twist at Young Greenwich’s Avery Hill Youth Club. The young people who worked with Samuel had taken part in the full interactive version of the workshop a few weeks prior and were challenged to teach Samuel all about county lines from what they had learnt.

The young people displayed very good knowledge of the topic and were able to explain all of the dangers involved in county lines and what to look out for to spot it early.

“It was a good workshop; I was surprised by the amount of knowledge that the kids took in and from the previous workshop that they had. It shows that they are really clued up on what they need to be aware of and how they can get away from this county lines which is currently going on all around us.”

Harry, a member of Young Greenwich who was part of the group teaching Samuel about county lines, said:

“The workshop was very beneficial to us. I think it opened my eyes especially to who might be vulnerable to county lines and being manipulated because it really can happen to anyone.”

A recent survey of the workshop with 693 responses found that: