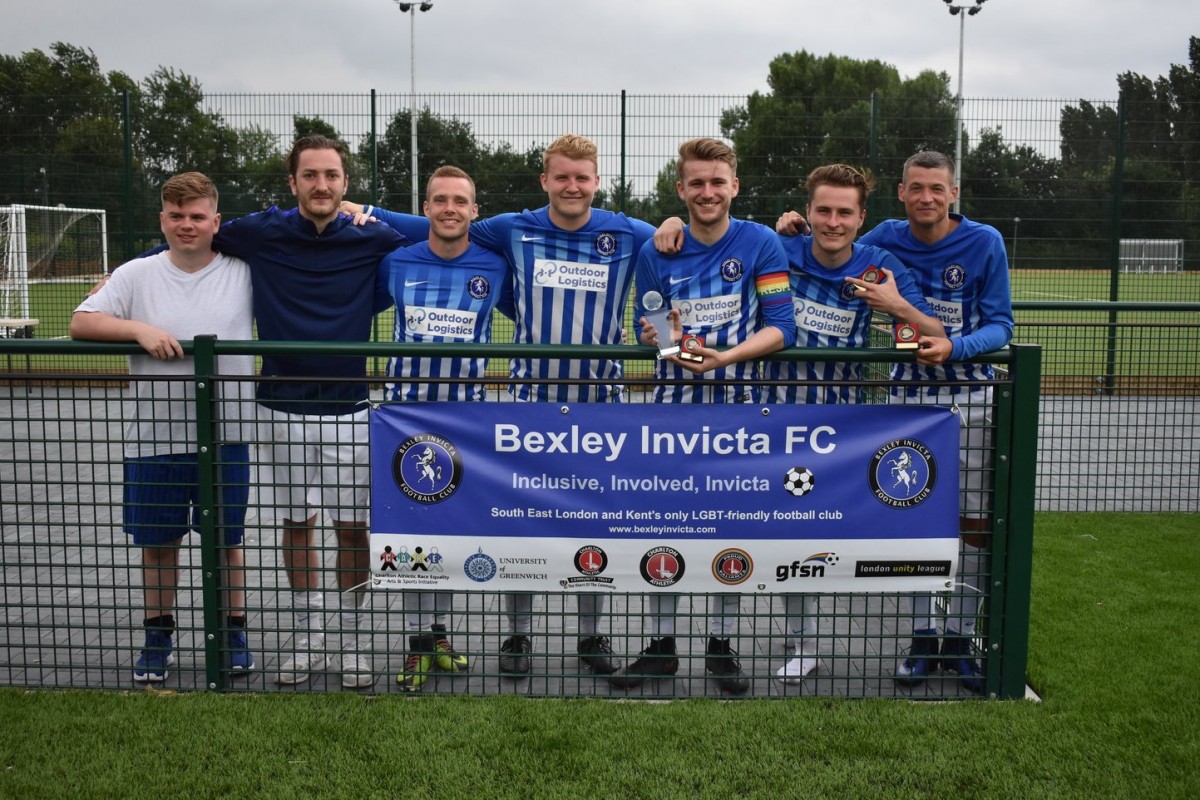 Supported by GRE Sports and Rec and the University of Greenwich, whose Avery Hill campus in New Eltham provided the venue, the event comprised six LGBTQI+-friendly football teams: two from BIFC, two from AFC Muswell Hill; and one from East End Phoenix and Soho FC.

Every team played each other once in the round-robin stages, with the top two, BIFC 1 and East End Phoenix, meeting in the final.

The group game between the two had finished 0-0, and the final initially appeared short of goals too. But that all changed during a thrilling finale. A competitive contest between two strong teams, it was a great advert for the LGBTQI+-friendly London Unity League, which both clubs play in.

With the match entering the last minute, Phoenix, who had twice hit the woodwork, took the lead and looked certain victors. But BIFC, who train at Sparrows Lane, had shown much resolve over the course of the 2016/17 campaign, and Dan Goodwin struck low into the bottom corner with seconds remaining to force a penalty shoot-out. The old saying “You are at your most vulnerable when you have just scored” seemed accurate.

BIFC won the toss and opted to take the first penalty. Michael Lisney stepped up and smashed the ball past the keeper, whose counterpart Karl Moir, making his competitive debut for BIFC, saved the following kick to consolidate his team’s lead. Club captain Ross Houghton made no mistake when it was his turn, bringing his side within touching distance of victory.

With the rest of the team watching on, keeper Karl saved superbly to earn BIFC yet more silverware in what has undoubtedly been the club’s most successful period.

The third place play-off was contested by AFC Muswell Hill 1 and Soho FC. A 1-0 victory for Muswell Hill saw them win the Plate, their first piece of silverware since rebranding.

“I want to thank CACT, CARE, the University of Greenwich and GRE Sports and Rec for all their support in ensuring the event went ahead. It’s been a fantastic occasion with lots of superb football from all competing teams.

“The players from all clubs should give themselves a pat on the back for their efforts. It is also excellent to see BIFC lift another trophy in what has been a very successful 12 months for the club.”

“Thanks to the support of CACT, CARE and the University of Greenwich, this has been one of the most successful BIFC tournaments ever. We hope that we can build upon this next year and deliver another fantastic day of football.”

“BIFC’s season just seems to be going from strength to strength! This was a fantastic victory The event was very well supported, and the University of Greenwich were a great support.

"The Home Office and Kick It Out highlight the role that everyone in football has in creating a more inclusive game, where everyone can feel included, and enjoy taking part ‘free from discrimination’ – this event was a great example of this. We are delighted to be working in partnership with BIFC".