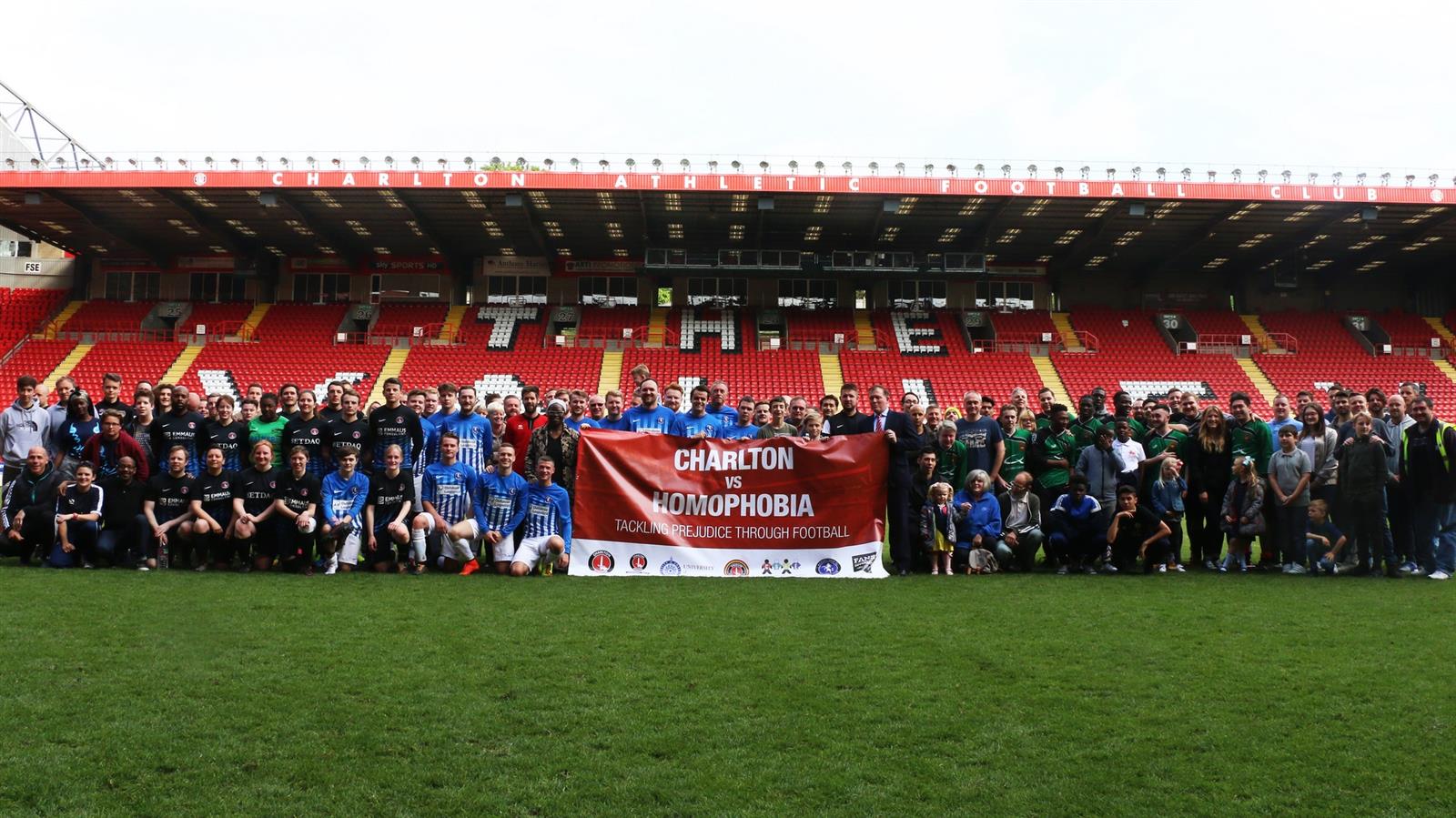 The second annual Charlton v Homophobia football tournament took place at The Valley on Sunday, with the event again being a huge success.

The afternoon - hosted in association with the Proud Valiants – saw the club’s official supporters club for LGBTQI+ Fans and allies compete alongside three other teams for the trophy.

Bexley Invicta, Fans For Diversity and the University of Greenwich were also eager to be crowned winners and it was the latter that took the title, after winning two of their three matches.

Last year, the competition only involved three teams and Chair of the Proud Valiants Rob Harris hopes that the annual event will continue to grow.

He said: “We had such a great mix of people playing, which was really amazing.  It’s very important that – through events like these - we spread the message of tackling homophobia in sport as well as promoting diversity.

“The involvement of Charlton has been second to none and next year the tournament is going to be bigger and better again, and we are very proud that it is continuing to grow.”

Such a view was echoed by Bexley Invicta Player-Manager Gary Ginnaw, who is also the vice-Chair of Proud Valiants.

“The event has been a lot bigger this year,” said Ginnaw, a Charlton season ticket holder for more than 20 years. “Last year was a great event but this year was a lot more planned; we’ve used a social media hashtag and have produced a matchday programme and it’s been a great occasion.

“As a big Charlton supporter, to have the chance to play on The Valley pitch again is fantastic too.”

She said: “It’s very important that people know we are a club that want to encourage anybody to come to our games and be part of Charlton. Tackling homophobia and any type of discrimination is very important to us.

“This season, we dedicated a home fixture to Football v Homophobia. People need to be made aware of the problems in football, regarding homophobia, and it is something that we at Charlton are very involved in.”

Equality Manager at the FA Funke Awoderu presented all of the players with medals after the tournament and she believes that events like Sunday will continue to be crucial in eradicating all forms of discrimination in football.

She said: “It was great to see everyone out there and kicking the ball around and obviously the real reason we were there was to help raise awareness around tackling homophobia.

“Certainly from the FA’s perspective, it is about zero tolerance and we are totally committed to ensuring that we combat discrimination in all forms.

“Days like Sunday are critical and important for professional clubs like Charlton to show their support for LGBTQ inclusion and also reinforcing that there is no place for homophobia in football.”

MP Damian Collins - Chair of the Culture, Media and Sport Select Committee – was also in attendance and says it is fantastic that Charlton and its Community Trust place so much importance on fighting discrimination.

He said: “It was a great community day. It’s fantastic that clubs like Charlton are supporting events like this. I know through my work in Parliament, chairing the select committee, that groups like Proud Valiants are really good advocates of supporters from the LGBT community in football.

“We have to make sure that there is a positive environment in football where people feel confident and comfortable in being themselves. Sunday was about people coming together and enjoying football, regardless of their race or sexuality.”