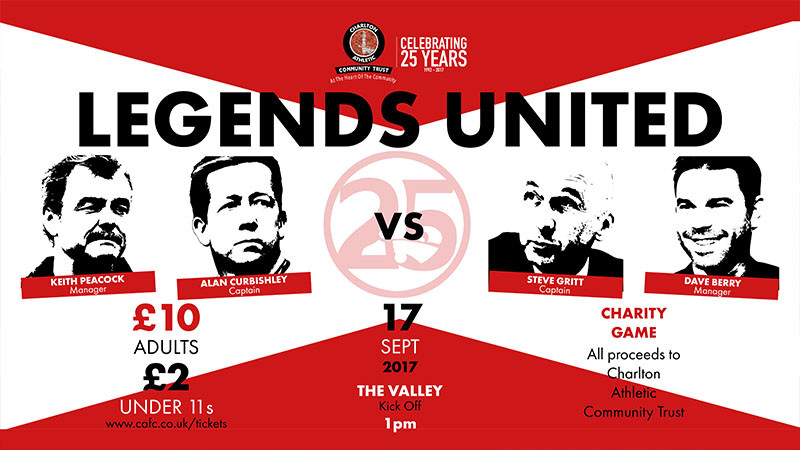 A host of Charlton legends have already confirmed their attendance for the Valley-hosted charity match that will celebrate the 25th anniversary of the formation of the Community Trust and club’s return to The Valley on September 17th.

The special, one-off match will see a team managed by Keith Peacock face off against a side led by Charlton-supporting DJ Dave Berry, and all proceeds raised will go to the Charlton Athletic Community Trust (CACT).

Last week, Alan Curbishley and Steve Gritt – Charlton’s joint managers when the club returned to The Valley in December 1992 – were confirmed as the captains for each of the teams.

Today, a number of club icons have also confirmed that they will also be there on the day and/or playing in the match.

Simon Webster, Scott Minto, Garry Nelson and Colin Walsh all played in the Addicks’ first match back at The Valley in December 1992, with the latter scoring the decisive goal in the 1-0 win over Portsmouth. They will grace SE7’s turf again this September.

They will be joined by Robert Lee, Charlton’s current assistant manager Lee Bowyer, Sasa Ilic and legendary striker Clive Mendonca, who so famously fired the club into the Premier League in 1998.

Also in attendance will be Chris Powell, who earned a hero’s status in SE7 both as a player and a manager and Club Ambassador Keith Peacock is delighted that so many have already agreed to take part in what is set to be a special afternoon.

Peacock said: “Our aim is to commemorate the 25 years being back at The Valley and the start of the community scheme. All money raised will support the work of Charlton Athletic Community Trust – so it can only be a good thing.”

Tickets for the match are now on sale and can be purchased by clicking here. They are priced at £10 adults and just £2 for U11s.

Further names are set to be revealed in due course and below you can see a list of the already-confirmed special guests and players...