The man with 3,000 football shirts 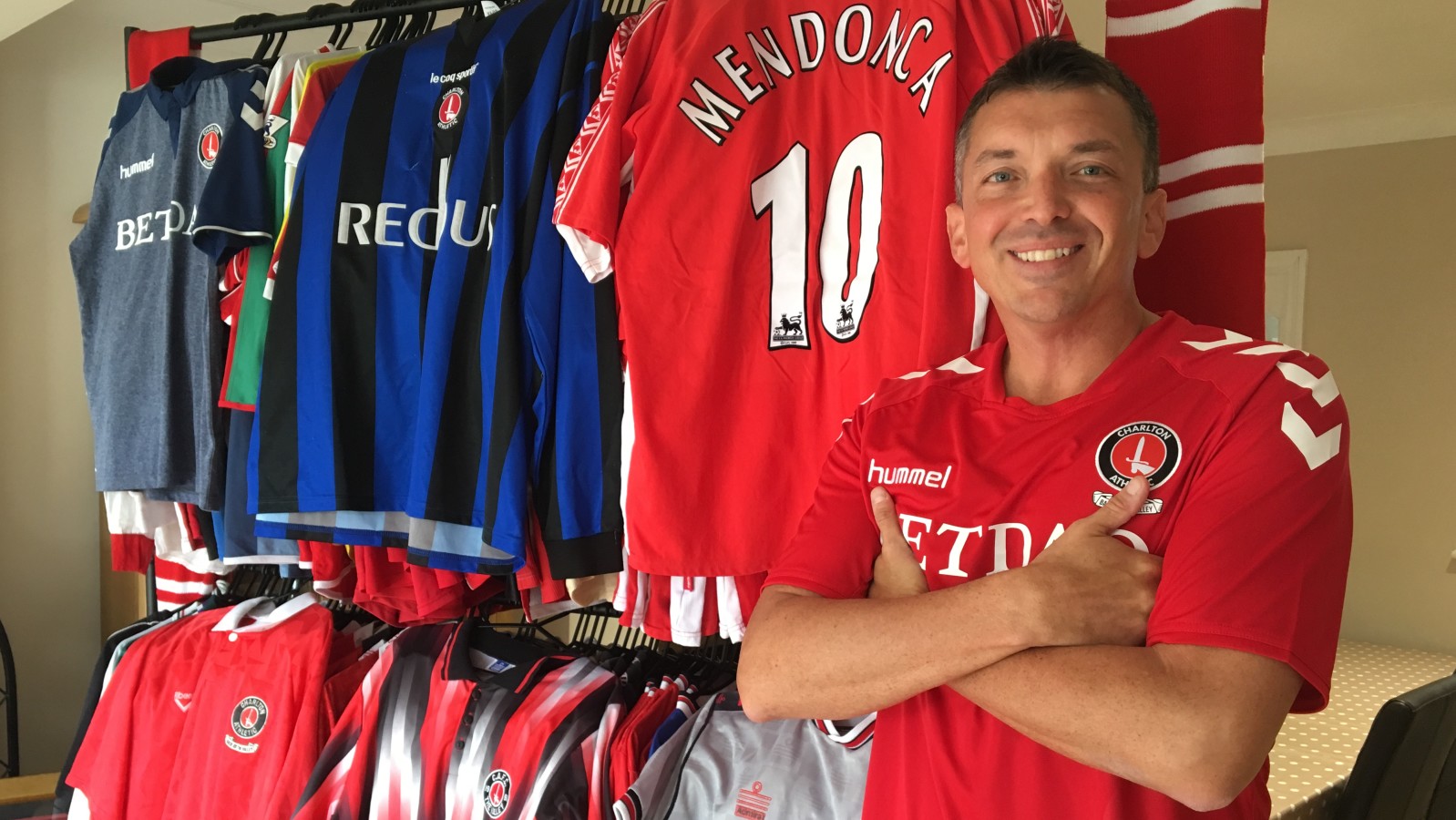 The original Back at The Valley shirt, that iconic MESH kit, the blue and black striped Redbus shirt - which if you remember rightly never actually went on sale…

Name any Charlton jersey from the last 30 years or so and you can bet that supporter Paul Slater owns one.

And, to tell the truth, he has probably got more than just one of them.

The Addicks supporter boasts an incredible collection of over 3,000 football shirts, of which more than 120 are Charlton.

Paul was a winner of the club’s kit launch competition in July that enabled him and one of his sons to get a sneak preview of our new, bespoke hummel strip at The Valley.

As part of being a winner, he also received a new shirt for free that now sits proudly at the top of his incredible collection.

Paul acquired Charlton shirt number one in 1998; the Le Coq Sportif strip that Clive Mendonca famously bagged a hat-trick at Wembley Stadium in.

Since then, his collection has grown bigger and bigger - with newer and earlier shirts being added – while his compilation of that Wembley-winning shirt now stands at 15.

“For me, winning that play-off game was one of my best times as a supporter,” said Paul, who first set his heart on Charlton in 1993 having moved back to Britain from Hong Kong five years earlier.

“Clive Mendonca scoring his hat-trick and Sasa Ilic saving that penalty. Any of those Mendonca shirts I own really encapsulate those moments so well.”

Football supporters up and down the country have hobbies and things that they collect, whether they be shirts, ticket stubs, programmes or something entirely different.

Was is it about shirts that ticks all the boxes for Addicks fan Paul?

“The thing with kits to me is that they're a bit like a time machine,” he said. “To a Charlton fan, an Adidas Woolwich shirt takes them back to those 1986-88 years.

"Ribero back to 1992 and the club’s return to The Valley, which obviously will bring back memories of the 1992 home game to Pompey.”

Upon recently visiting him at his family home, Paul had organised every one of his Addicks strips in chronological order.

And he explained where his collection now stretches back to, with his most modern strips being this season’s bespoke, hummel-designed ones.

“The oldest shirts I have are the original Osca home red pinstripe ones from 1983,” he said. “Though I also have the original Adidas FADS tracksuit top from 1980, too.

“I was always a bit of 'statto' as a kid, knowing all 92 teams' grounds, nicknames, players, kits, sponsors and so on.

“I collected kits as a kid and restarted my interest probably around the mid-1990s when I moved to the Bexley area and married my wife, who's family were lifelong Charlton fans.

“I supported them, then tried to collect all their kits when I became a season ticket holder around 20 years ago now.

“I was always fascinated with the designs, the colours - good and bad – and some of my favourites are those hallucinogenic, psychedelic ones from the mid-1990s.”

Paul’s hobby is not a cheap one and he estimates that his Addicks shirts are worth approximately £10,000, though he has only paid a fraction of that.

“My favourite strip is a grey Admiral Woolwich one from 1988 and I have picked up a couple of bargains down the years,” he said.

“The Inter Milan-style Redbus shirt, I picked up for £1 from a boot sale and at the other end of the scale I’ve got Bob Bolder’s spare shirt from the Full Member’s Cup final. That cost me around £120.

“The further back you go, the more they become like gold dust. I’m missing a couple from the 1980s but I’m always on the lookout.”

Own any of these shirts and no longer want them?

Please contact press@cafc.co.uk , we know someone that would love to add them to their ever-expanding collection…

Watch the video interview with Paul here on Valley Pass.

If you have a kit collection that can rival Paul's then do get in touch at press@cafc.co.uk.