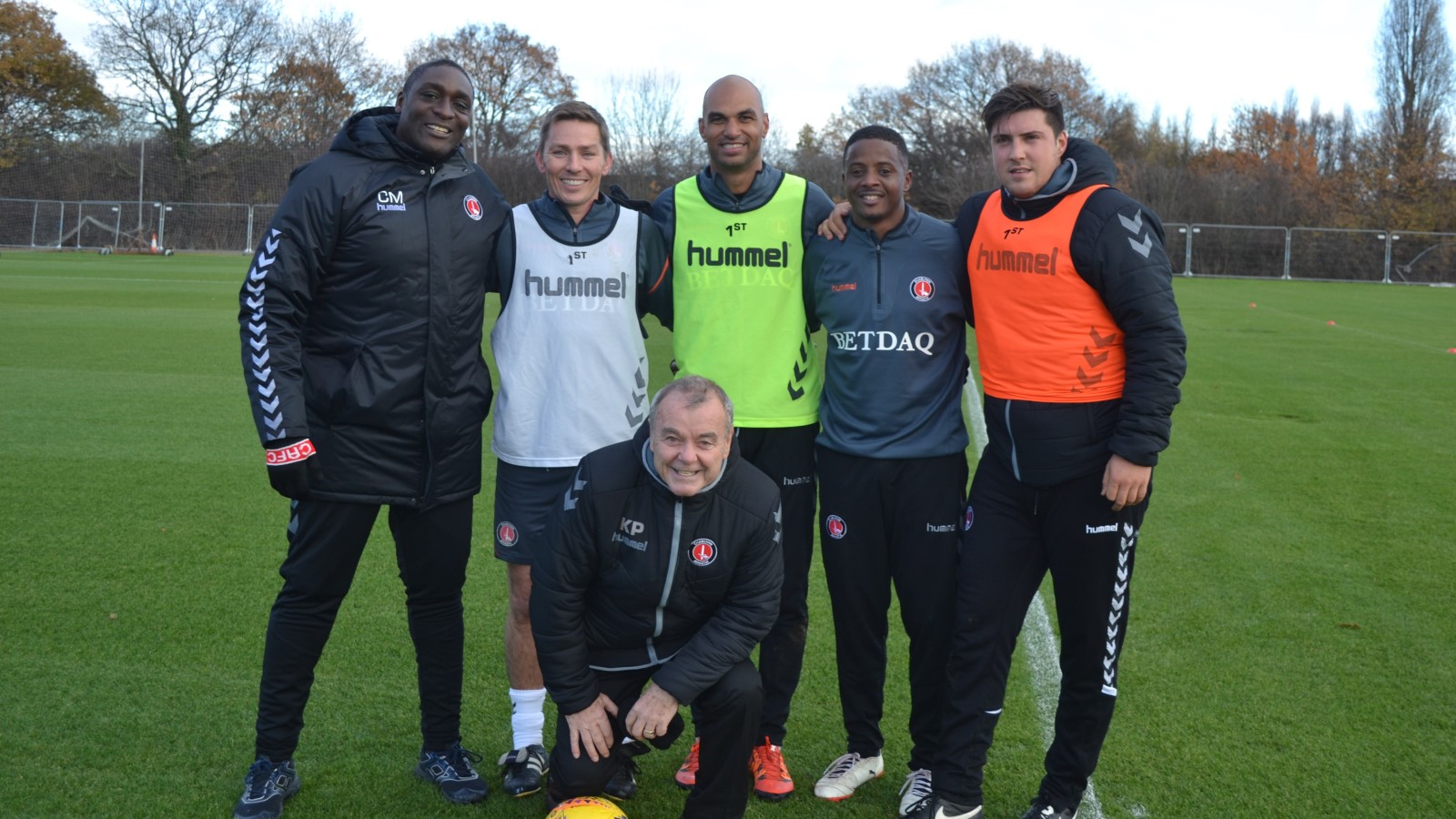 Former Charlton Athletic players were invited to join in training with the Addicks first team today ahead of the club’s anniversary game against Portsmouth next week.

Carl Leaburn and Bob Bolder both played in the club’s first game back at The Valley in 1992 and they were joined at Sparrows Lane by Matt Holland, Jon Fortune, Kevin Lisbie, Grant Basey and Keith Peacock.

Watch the full video on Valley Pass by clicking here

Karl Robinson explained why he invited the former players: “I like to get a little bit more of an insight always and every day I’m learning. I just felt with the 25th anniversary coming up, it was important to invite some of them. From the day of the Portsmouth game (December 5th 1992) to the day of our Portsmouth game (December 9th 2017), I felt it was important to see if I could get people here who had associated themselves (with the club) right across that period of time. From Bob Bolder and Big Carl (Leaburn) to Matty (Holland) to Jon (Fortune) and Kevin Lisbie and then we’ve now got Johnnie Jackson and Chris Solly who’ve played many a year. It was good because they were relatively fit, well, some of them were relatively fit. They joined in the warm-up, we did a bit of possession, we did a bit of passing, a bit of boxes, a bit of fun.

“We had a three team tournament and they were captains of the teams. We had to get big Carl (Leaburn) to referee because I don’t think anyone is going to argue with him.

“We walked back over and Jake Forster-Caskey said ‘I don’t think Matt Holland gave the ball away all day’. He makes the game look so easy, still. I’m sure any Charlton fan will be thinking ‘Yeah, he didn’t give it away much when he played either’.

What the former players said:

“All credit to Karl (Robinson) and his team, they’ve invited us down. I was going to watch but I decided to join in the warm-up and they put me through my paces. It was a good work out. A jolt to the system as I don’t think I’ve been on the training pitch and trained for 20 years. It was good to see all the guys down here.

“That camaraderie, that banter hasn’t changed, they’ve always been a team that are together, that’s the way you are going to go forward.”

“There is every chance I could be playing Sunday the way we (the former players) trained today. It’s good to be back out here. It’s nice of them to invite us. It’s good to be part of this club, we’ve always been part of it. We (Lisbie and Fortune) have been here since we were 13 or 14.”

“That feeling of being out walking back onto that training pitch again! Me and Lisbie drove in together and it just brings back memories. It makes you really appreciate what you had back then and how much fun we had back then.”

“I absolutely loved it. You don’t realise how much you’ve missed it to be honest until you are back out there enjoying the laughing, the joking around but also being out on the pitch and kicking the ball around. A big thank you to Karl for inviting us along today.”

Robinson concluded: “It’s something we’re looking to do more often, once a month where the ex-players can come down and have the freedom of the training ground, to go in the gym, watch training, join in a warm-up so we can just really immerse ourselves in the last 25 years of the football club and many, many years before with memories that have lasted a lifetime in families, to try and bring that back just a little bit.”

Tickets for Charlton's 25th Back at The Valley anniversary game against Portsmouth are on restricted sale. Click here for more information.