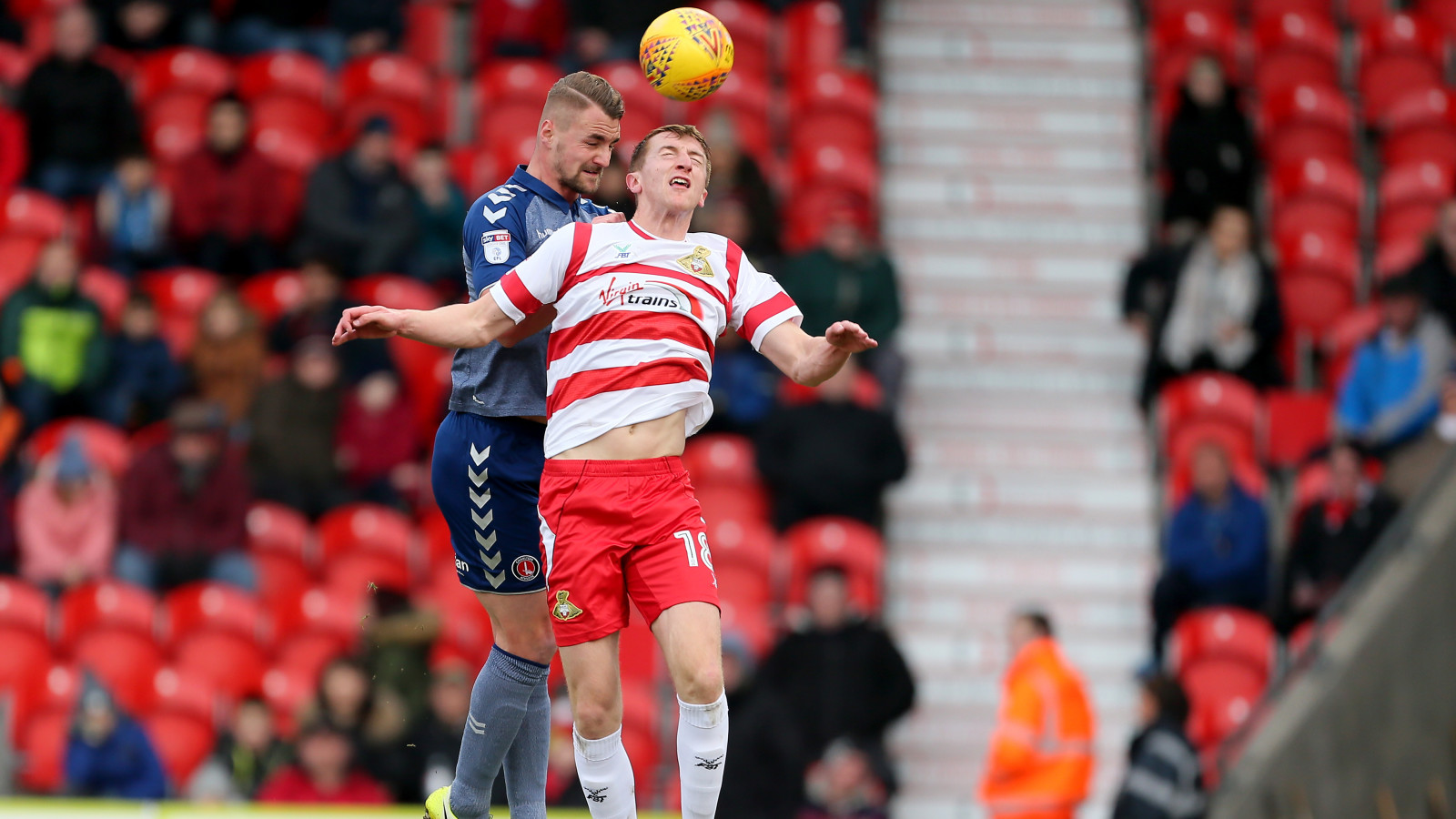 It was stoppage time heartbreak for the Addicks as a late Matty Blair goal cancelled out Patrick Bauer’s 18th minute header as Charlton drew 1-1 with Doncaster Rovers at the Keepmoat Stadium.

Bauer scored his third of the season and Tariqe Fosu was untouchable in a dominating Addicks performance but that will be of little consultation to the noisy 783 travelling fans.

The draw keeps the Addicks in seventh place, two points and two games behind Bradford City who visit The Valley on Tuesday.

The Addicks had their first effort at goal when a second minute Fosu free kick from 25 yards out flew harmlessly over the home side’s crossbar.

At the other end defender Andy Boyle had the home side’s first effort of the game when he headed wide from an outswinging corner in the fourth minute.

Some great joint pressure by Josh Magennis and Mark Marshall resulted in the Addicks next chance as the two worked with Jake Forster-Caskey to dispossess Doncaster high up the pitch. Marshall then cut elegantly inside two defenders and stood on his feet when he could have gone down, the winger’s cross across the face of goal found Fosu close to the byline who pulled back but Boyle just beat Reeves to the ball. The clearance came to Ahmed Kashi whose effort went wide.

In the 17th minute Boyle stopped a certain Charlton goal when he cleared from two yards out with Magennis lurking behind him. The chance came after a fantastic run from Fosu to use first his skill and then his speed to get away from two Rovers defenders on the left before his cross across the face of goal.

Charlton took the lead with the corner in the following minute when Patrick Bauer leapt above his marker and powered a deep Jake Forster-Caskey corner into the ground and past the Doncaster keeper Ian Lawlor.

Fosu continued to cause problems and produced a wonderful bit of skill to control a difficult ball and then get away from Boyle with the defender having to pull him back on the edge of the area for a foul that could have easily got his name in the referee’s notebook.

John Marquis forced the first save for Ben Amos in the 25th minute when he connected with a first time effort after Tommy Rowe had got in behind the Charlton defence on Doncaster’s left and squared the ball to the giant striker. The shot was tame and straight at Amos who gathered comfortably.

Josh Magennis headed a whipped Forster-Caskey corner wide in the 27th minute as the Addicks continued to control much of the first half.

As the half continued Rovers started to come a little bit more into the game with a jinked Marquis dribble the highlight.

The Addicks could have made it 2-0 just before the stroke of half-time, again the brilliant Fosu was the creator and as he made his way into the box he unselfishly passed to Reeves arriving at the back post, the attacking midfielder touched it back to Magennis whose shot was well blocked and the ball fell for Marshall who also had his goalbound effort blocked.

Charlton went in a deserved 1-0 up at the break with Fosu particularly influential.

After some Doncaster possession to start the second half it was Fosu who was first to test Lawlor in the second half. Ezri Konsa swept a beautiful cross-field ball to Jay Dasilva whose first touch took him brilliantly away from Blair, he cut the ball back to Fosu near the edge of the penalty area. The winger faked the shot taking out two Doncaster defenders and powered a left-footed shot at goal which Lawlor did well to parry away.

Lawlor saved well again in the 64th minute this time to deny a neat first time right-footed effort from Ben Reeves after a clever Magennis knock down.

An incredible last-ditch tackle from Tom Anderson prevented Fosu from doubling the Addicks lead in the 78th minute after the winger had disposed Blair near the half way line, carried the ball forward and rounded keeper Lawlor. With an empty net beckoning Anderson launched a brilliant diving tackle to deny the former Reading man.

Despite the Addicks controlling much of the game Blair nipped in at the back post after a goal mouth scramble to poke home from three yards out capitalising on a deflected blocked shot to level the scores at 1-1 deep in stoppage time.

Highlights for today's game will be available on Valley Pass from 12midnight. A matchday pass costs just £4 and gives you 48 hours access to our video and audio subscription service which includes live commentary, highlights, post-game reaction and access to the extensive Valley Pass archive. Click here to sign-up.