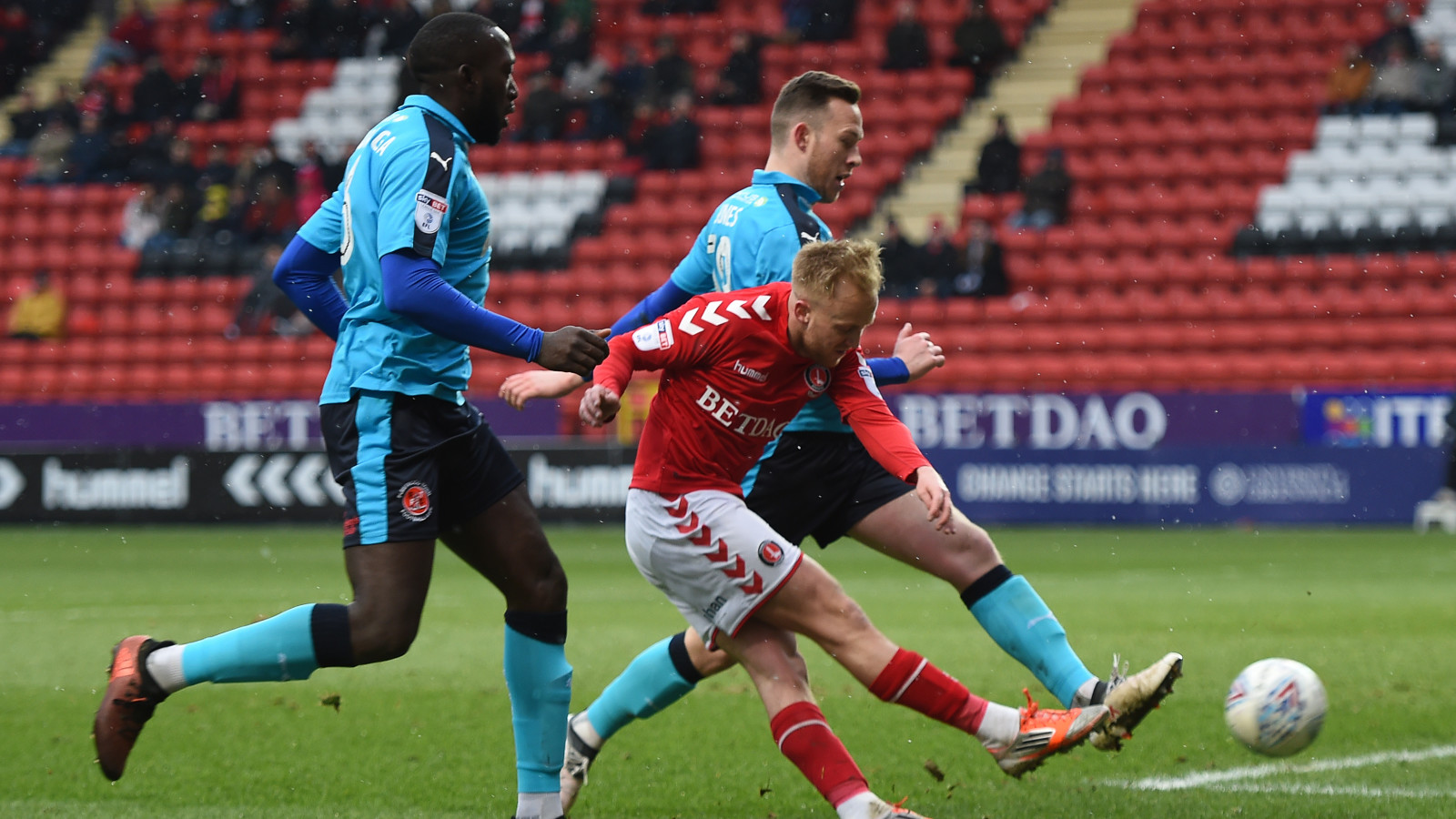 Charlton had to settle for a point at The Valley after contesting a goalless draw against Fleetwood Town on Saturday afternoon.

The Addicks battled well, but despite spells of good pressure and some good chances, they could not find a way to goal.

Karl Robinson made three changes from Tuesday’s 1-0 defeat against Blackpool. He was forced into a defensive reshuffle as Lewis Page and Chris Solly missed out through injuries picked up at Bloomfield Road. They were replaced by Naby Sarr and Joe Aribo, whilst Mark Marshall also came into the starting XI at the expense of Michal Zyro, who dropped to the bench. Sully Kaikai was fit enough to take his place on the bench after a recent injury lay-off, whilst Jason Pearce led the side out as captain for the first time.

Looking to avenge the previous three defeats, Charlton started brightly. Just two minutes into the game, Marshall won a corner and, although it was cleared, Jake Forster-Caskey played a ball back into the box that was just scrambled away from Josh Magennis.

Fleetwood had their first chance just minutes later, but a looping header from Wes Burns was easily claimed by Ben Amos.

The Addicks continued to press and after some tricky play, Tariqe Fosu was hacked down 25 yards from goal. Ben Reeves hit the initial free-kick into the wall, but from the rebound he sent a volley wide of Alex Cairns' goal. Reeves then had a good chance in the box, but his shot was charged down before a cross into the box was punched away by Cairns with Magennis lurking.

Reeves had a great chance for Charlton shortly afterwards. He closed down a clearance and, as the ball broke for him, he ran into the box before he jinked his way past a few defenders but he dragged his cross-shot wide of the goal.

Despite early dominance from the Addicks, Fleetwood grew into the game and Patrick Bauer had to be alert to block a shot from Paddy Madden after he found himself free in the box.

Marshall and Fosu were playing well on the wings, with Forster-Caskey and Aribo controlling things in the middle as Charlton pushed for a goal. Forster-Caskey played Fosu into the box and, after finding some space, his shot was well blocked by Cian Bolger. After a long throw into the box, the ball bounced to Reeves but his shot was blocked before it came out to Aribo, who shot straight at Cairns from distance.

The away side were frustrating the Addicks, with Ashley Hunter looping a header straight at Amos before he ran into the box on the left after Ezri Konsa had dived in, but his cross was cleared well away. The ball then found its way back to Kyle Dempsey, but he shot straight at Amos.

Both teams huffed and puffed but, despite Fosu sending a shot well over Cairns crossbar, neither side created anymore clear-cut chances as the match headed into the break goalless.

Charlton came out after the restart and with the snow falling they pushed hard for a goal. Fosu, again, jinked into the box and his teasing cross was tipped away by Cairns only as far as Marshall, but he couldn’t control and the ball was cleared. Reeves then had shot, but it was straight at the goalkeeper. Sarr and Marshall then linked up well, but the winger's shot was blocked.

Like the first-half, Fleetwood grew into the game and the home side were indebted to Amos after he saved from Hunter when one-on-one, before he made a finger-tip save on the follow-up from Jack Sowerby.

Robinson then made a double change with Nicky Ajose and Zyro coming on for Magennis and Reeves. Those two then linked-up well, but the on-loan Wolves man's shot was blocked. Fosu then blazed a shot well over before Charlton did have the ball in the net, but it was ruled out for offside. Forster-Caskey played Ajose in on the left and the striker drove into the box before dinking the ball into the net, but he was adjudged to be offside.

The Addicks were then fortunate not to concede after Pearce hesitated and gave the ball away, allowing the Cod Army to drive forward. But when the ball was pulled back to substitute Conor McAleny he dragged wide.

Late in the game, Forster-Caskey, Zyro and Sarr all tried their luck from range but to no avail as Fleetwood stood firm and the game ended goalless at The Valley.