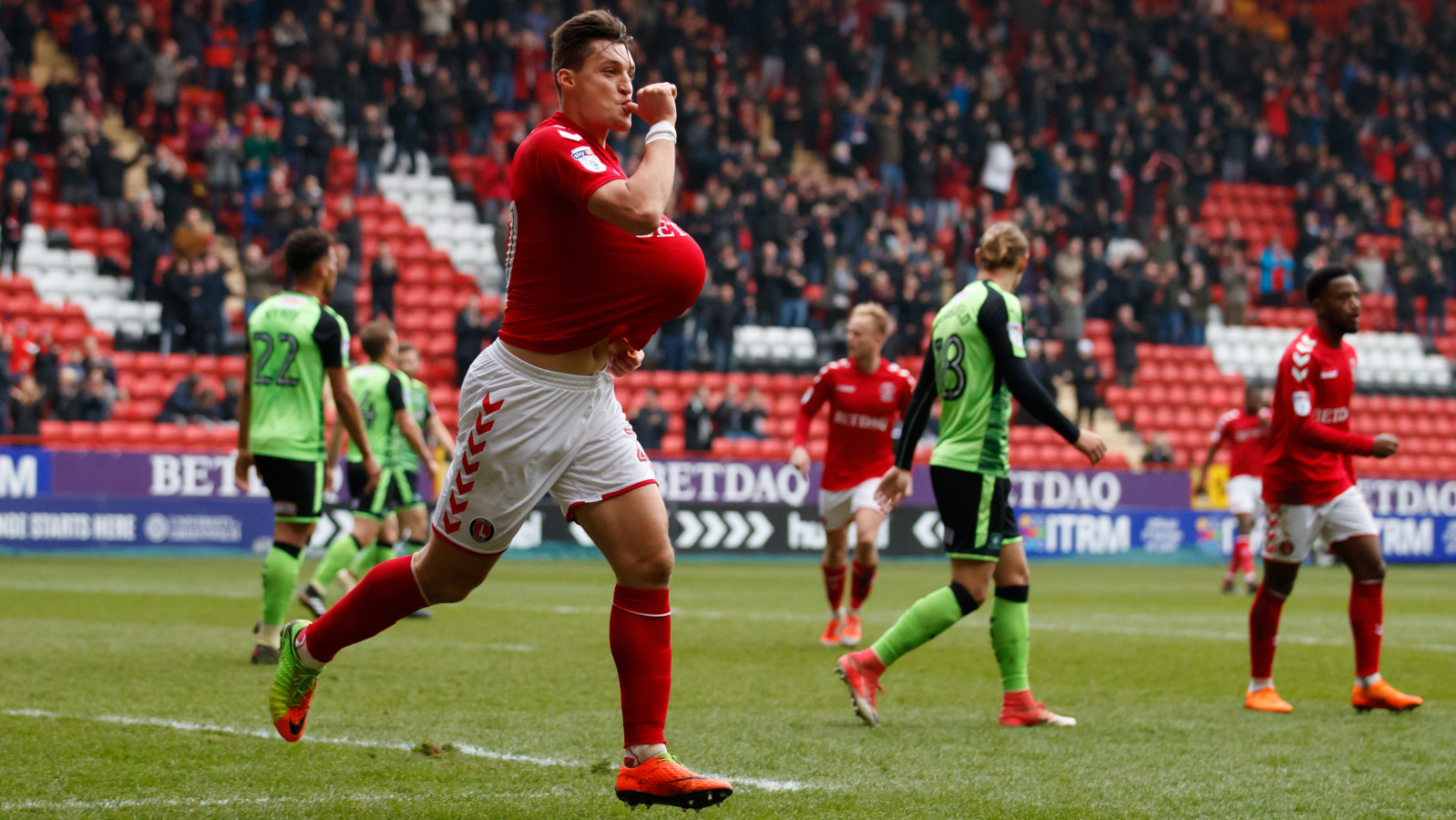 Bowyer said in his first press conference on Friday that he would set out his side to win games and that was on show right from the start with the Addicks nearly taking the lead in the first minute before Page put the home side 1-0 up in the third minute.

Charlton played with real tempo and despite an open first half were value for the three points with Jason Pearce leading the defence brilliantly and Zyro knitting everything together up front.

Bowyer made four changes to the side that drew 0-0 with Fleetwood Town last week and maybe most significantly switched the formation to a diamond. Ben Amos continued as an ever-present in goal with Patrick Bauer and Jason Pearce at centre-half. Youngster Anfernee Dijksteel replaced the injured Chris Solly at right-back with Page returning to the side at left back after suffering a concussion against Blackpool earlier in the month. Jake Forster-Caskey held in defensive midfield with Ben Reeves and Joe Aribo in front of him. Tariqe Fosu occupied the number 10 position behind Nicky Ajose and Zyro.

Charlton got in during the first minute when a lovely Ajose flick nearly fell to Zyro with Plymouth goalkeeper Remi Matthews just able to pounce on the ball.

The Addicks took a third minute lead when Dijksteel’s early cross was headed clear but only as far as Lewis Page about 30 yards out. The full back controlled well to advance and his second touch was a smashed left-footed half volley that gave Matthews no chance and went in off the crossbar. An absolute cracker.

Charlton were flowing and in the eighth minute Zyro touched off for Tariqe Fosu who sprinted down the left away from his defender but his effort from just inside the box was too easy for Matthews.

Plymouth hit the post in the 15th minute when after, some neat work down the right, Ryan Taylor’s effort forced an incredible save from Amos.

The Addicks made it 2-0 in the 17th minute. Ajose, Zyro and Page had a nice exchange after a beautiful Reeves switch of play but Ajose’s clipped cross to the back post was just too high for Fosu. Joe Aribo was first to the loose ball and his left-footed cross from the right was right on Zyro's head, the striker made no mistake with his close range finish.

In the 21st minute the Addicks were knocking on the door again. Matthews handled outside the area to stop Zyro getting to a Page ball and the resulting free kick from Forster-Caskey was nearly headed into his own net by a Plymouth defender.

Patrick Bauer was close to making it 3-0 in the 24th minute when his header from a Forster-Caskey corner was smothered away near the goalline.

Plymouth were not going quietly though and Graham Carey sent a curling effort from a tight angle just wide of Amos’ post on the half hour mark but at the other end a dangerous Dijksteel cross didn’t quite find Zyro.

Just before half-time Ajose forced a sharp save from Matthews with a fantastic acrobatic first-time volley from a cleared Plymouth header.

The Addicks went in 2-0 up at half-time in a very open first half with the home side having just the better of the chances created.

Charlton started the second half on the front foot and, after some lovely passing interplay, Reeves’ chipped cross to the back post from the right was just too long for Aribo.

The Charlton passing continued and on the counter Reeves found Ajose whose wonderful deft touch froze his defender and found Fosu whose effort inside the box on his favoured right foot went just wide.

Fosu hit the side netting in the 70th minute after latching on to an Aribo through ball and then Ajose forced a save from Matthews after capitalising on a Zyro flick on.

At the other end Plymouth had been quieter in the second half but a 77th minute fizzed left-footed shot from Carey from 25 yards out went just over the crossbar and reminded the home faithful that they were still a threat.

Zyro, who linked up much of Charlton’s play throughout, flicked on to Fosu and received back in the 79th minute with his shot from outside of the area giving Matthews a scare but curling just wide. The striker had an even better chance to put the game to bed in the 87th minute when Aribo played him in but the striker’s right-footed effort went just wide of the post.

There was time for Academy graduate Taylor Maloney to make his league debut just before full-time.

Bowyer said he wanted six, maybe seven wins from the remaining 10 games and today his team took their first step towards his target with an impressive performance against a good opposition.