Pride in London brings the Charlton Family together 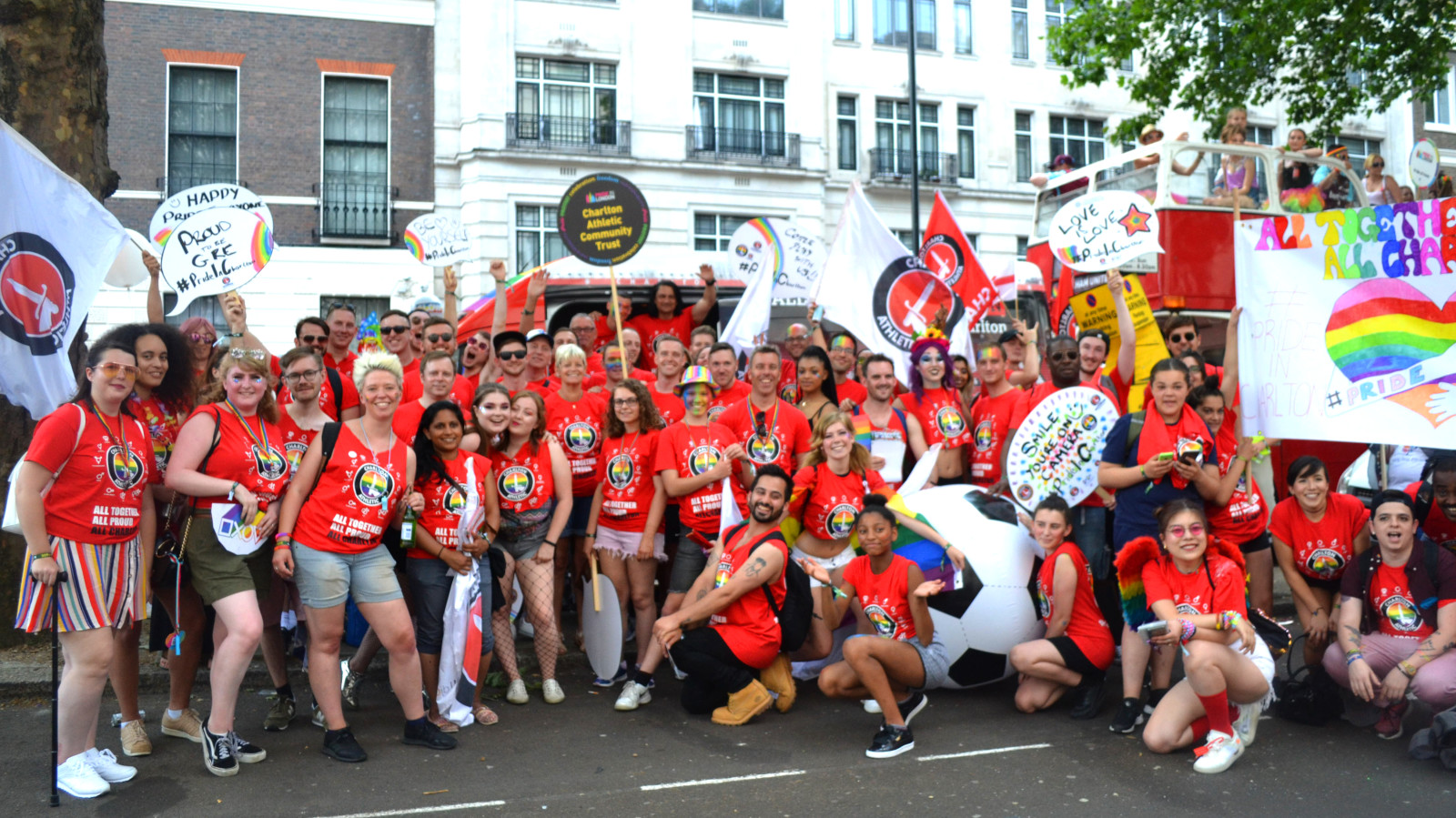 More than 75 people joined a Charlton Athletic group at the ‘Pride in London’ parade on Saturday, July 7th, marching through Central London for the annual celebration of LGBTQI+ rights.

Pride in London saw Charlton Athletic Community Trust (CACT) celebrate the success of LGBTQI+ friendly football team CACT Invicta FC and LGBTQI+ supporters’ group Proud Valiants. It was a historic event, with Charlton becoming the first professional club to have its own float in the parade. Previously, clubs had solely been represented by fan groups.

Participants walked behind CACT’s professionally designed LGBTQI+ themed minibus, while students from the University of Greenwich and young people from Woolwich Common Youth Hub showcased the banners they had made to crowds lining Trafalgar Square, Piccadilly Circus and other London landmarks. Students were also joined by University of Greenwich staff and Students’ Union sabbatical officers. Additionally, there were a number of trainees and graduates from the National Citizen Service programme that CACT delivers.

Around 500 LGBTQI+ groups and more than 30,000 people took part in the parade, while hundreds of thousands lined the streets.

The Charlton group danced, waved flags, kicked around inflatable footballs and also shared goal updates from England’s 2-0 World Cup win against Sweden with cheering crowds, really embracing and reflecting the theme: All Together, All Proud, All Charlton.

Dr Michael Seeraj, CACT’s Head of Equality, Diversity & Inclusion, said: “It was fantastic to see so many people in our Pride in London group during the parade on Saturday!

“There was a brilliant atmosphere throughout the day, and the overwhelmingly positive response from crowds underlines just how much desire there is for football to break down barriers for LGBTQI+ people.”

“To have so many participants involved on the day with so much diversity across the group was a fantastic sight. I’d like to take time to thank every member of the steering group that spent so many hours making the event such a huge success.

“So many people on the day were congratulating us for taking part with such a huge group, making a massive impact in front of the whole of London and beyond – football is for everyone.”

Rob Harris, Proud Valiants’ Chair, said: “Proud Valiants were so proud to be part of the Charlton Family on such a wonderful day, a great day for diversity everywhere!

“Homophobia has no place in today’s society anywhere and it was a brilliant day with an awesome win for England, which we shared with a really enthusiastic crowd.

“To see so many red Charlton t-shirts was an amazing spectacle, and we owe a real thanks to all the people who joined us on such a hot day and made a huge sacrifice by not watching the match.”

A representative from the University of Greenwich said: “We are and always will be a proud supporter of the LGBTQI+ movement and it’s great to be able to publicly demonstrate our commitment to the cause alongside Charlton, our partner and local football club.

“Whilst there has been phenomenal progress in LGBTQI+ rights, there is still a long way to go, and events like London Pride not only celebrate inclusivity and diversity, but also the progress we continue to make towards a more accepting world.”

The Charlton group’s participation in Pride in London was also supported by the Charlton Athletic Race & Equality Partnership, the University of Greenwich, the FA, the EFL Trust, the Professional Footballers’ Association, Fans For Diversity, Kick it Out, Whitecode Design, Norton Rose Fulbright and ITRM.