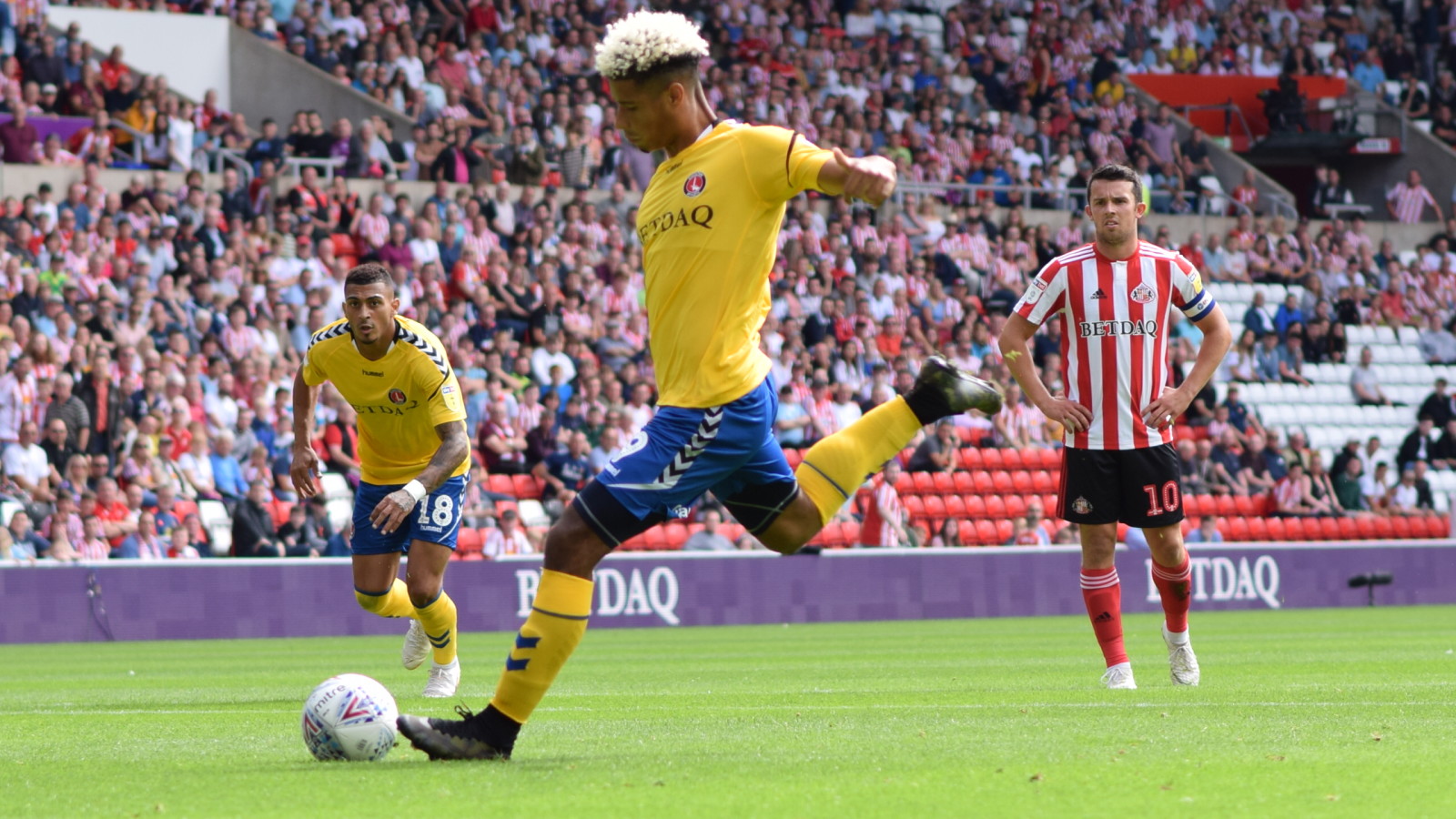 Charlton were undone by a 96th minute goal against Sunderland at the Stadium of Light on Saturday afternoon.

The Addicks – who had led early on after new signing Lyle Taylor fired home a penalty – were pegged back by Josh Maja’s 65th minute equaliser.

And, seconds from the end, Lynden Gooch headed home a winner for hosts, depriving the south-east Londoners of what would have been a well deserved point.

In terms of team news, new signings Taylor and Darren Pratley were fit enough to make their Charlton debuts, as caretaker boss Lee Bowyer named his first XI of the new season.

Dillon Phillips – donning the number one shirt – started in goal and ahead of him was a back three of Chris Solly, Patrick Bauer and skipper Jason Pearce.

Mark Marshall and Lewis Page operated as wing-backs with Pratley, Joe Aribo and youngster George Lapslie making up a midfield trio. The latter was making his first league start for the club.

Up front, Karlan Grant provided support to Taylor and the former AFC Wimbledon man would not have to wait long for his first Charlton goal.

The first effort of the new season came in from new Addick Taylor when, following a foul on Marshall, he curled a third-minute free-kick over the crossbar.

A deflected free-kick on seven minutes – this time from Grant – saw Charlton threaten Sunderland’s goal again and two minutes later they would grab the lead.

A great touch from Grant saw him turn defender Glenn Loovens on the half-way line and, after scampering into the box, he was hacked down by Chris Maguire, giving referee John Brooks no option other than to point to the spot.

Taylor placed the ball down and rifled his spot-kick home to give his side the lead, before running straight over to the away bench and lifting aloft Jake Forster-Caskey’s shirt. The midfielder sadly suffered a season-ending injury on Thursday and the striker dedicated his goal to his teammate.

Straight afterwards, Taylor almost grabbed a second when he closed down goalkeeper Jon McLaughlin but the stopper was able to clear the ball away in the nick of time.

A delicious Grant cross just evaded the head of Marshall at the far post with 14 minutes played, while at the other end Sunderland had yet to threaten.

Pratley was next to go close. He stung the palms of McLaughlin with a powerful 25-yard shot and, from the corner that followed, Aribo squeezed a header just wide.

Charlton had a great chance to double their lead on 28 minutes. Page broke down the left and sent in a low cross that was only half cleared, and Lapslie fired the loose ball into the arms of McLaughlin.

Sunderland fired their first shot at goal three minutes before the break. Substitute Bryan Oviedo – on for the injured Donald Love – took aim from 30 yards but Phillips made an easy save from his shot.

They came close to levelling as the clock hit 45 when Loovens glanced on a corner with his head, but Alim Ozturk could not divert his flick goalwards.

Moments later, the hosts probably should have levelled. Maguire’s scuffed shot fell kindly for Maja but he was unable to beat Phillips from close range.

It was a great save from the Addicks’ number one – who had made himself big – and it ensured that his side headed in ahead at the break.

A looping Aribo header tested McLaughlin at the beginning of the second period and, on 53 minutes, the home goalkeeper had to dive to his left to keep out a goal-bound Marshall cross.

Both sides were temporarily reduced to 10 men following a clash of heads between Solly and Jerome Sinclair but after some patch work for the Addick and stitches for the Mackem, both teams were restored to 11.

Sunderland levelled on 65 minutes. Maja picked up the ball on the edge of the box, shifted it onto his left foot and drilled a low shot inside of Phillips’ post.

Bauer headed a corner wide for Charlton with 15 minutes remaining and, at the other end, Phillips made a superb save to keep his side level. Maguire curled a free-kick towards the corner but the stopper flew across his goal to make a stunning stop.

Sunderland missed a great chance to take the lead five minutes from time. Oviedo sent in a low cross but, from six yards out, Sinclair could only steer the ball wide.

Six minutes of stoppage time were indicated at the end of the 90 minutes and the match looked destined for a draw. But in the final minute, the hosts netted a winner.

A deep cross came over to the back post and Gooch – who a few minutes earlier had forced Jason Pearce off injured with a crude tackle – headed home.

It was cruel on the Addicks as they were worthy of a point but Bowyer’s boys will now have to bounce back against Shrewsbury Town next weekend.