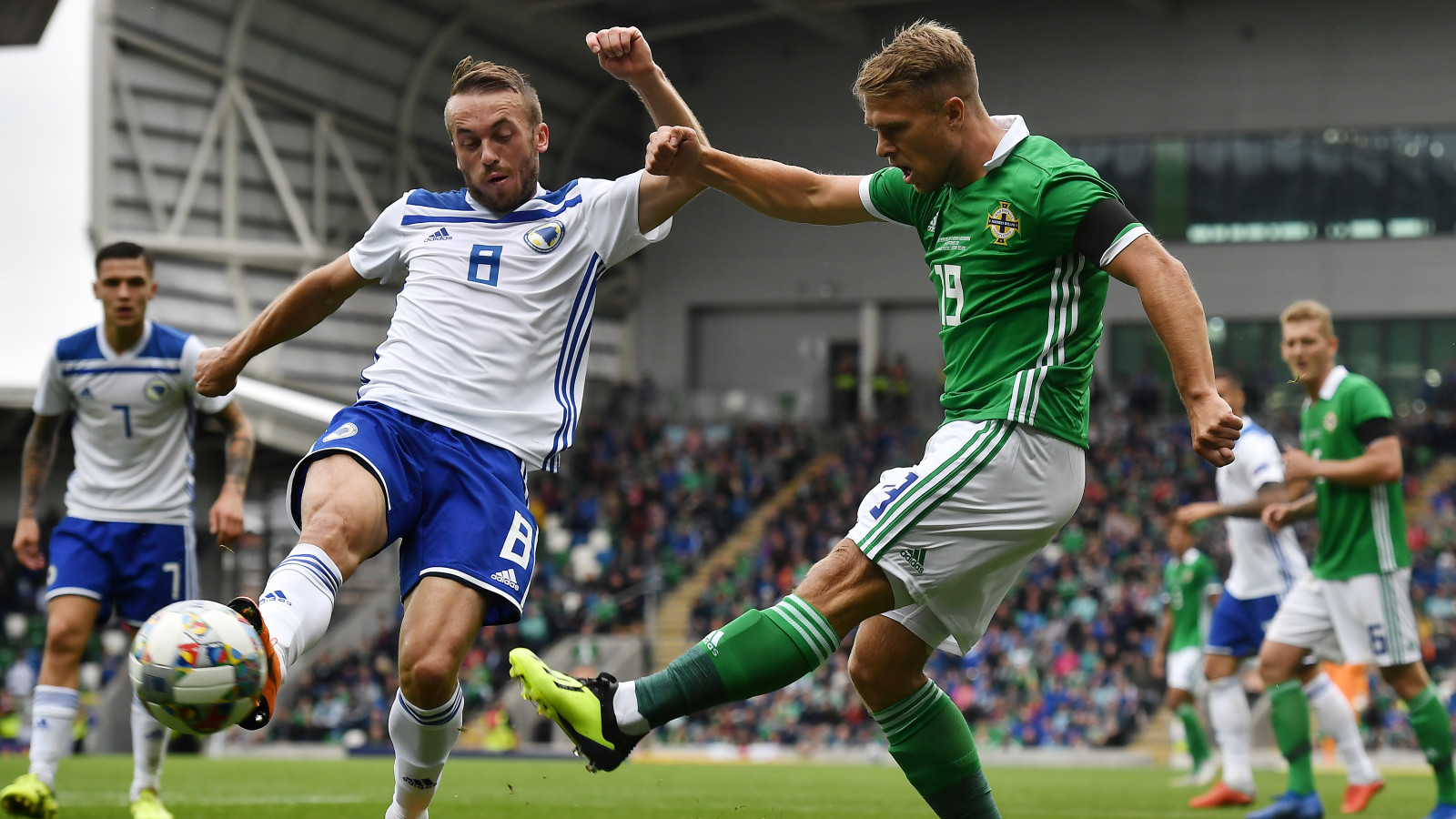 The Addicks winger replaced Niall McGinn in the 75th minute to win his 34th cap in what turned out to be a frustrating day for the Green and White Army.

Northern Ireland should have had a first minute when George Saville Jinked his way into the box before being taken down by Ervin Zukanovic but referee Pavel Kralovec waved away the protests.

The home side came close to opening the scoring on 18 minutes as Niall McGinn broke his way into the box before his shot was well kept out by Bosnia keeper Ibrahim Sehic.

Michael O'Neil's men dominated the early stages and could have been ahead on 21 minutes when Stuart Dallas let fly from range but the ball sailed just wide of the upright.

Sehic was tested again on the 28th minutes as Jonny Evans met a Oliver Norwood corner but he could only head straight at the keeper.

However less than a minute later it was the visitors who created a fine opening as Edin Dzeko latched onto a pullback from Toni Sunjic but his snapshot was kept out by Debutant goalkeeper Bailey Peacock-Farrell.

Bosnia very much against the run of play took the lead on 36 minutes as Dzeko crossed low into the box for the onrushing Haris Duljevic to slot the ball under the legs of Peacock-Farrell.

After a period of play with the ball stuck in midfield it was the home side who created the final opening of the half as Steven Davis tried his luck from outside the box but the ball sailed just wide of the target.

The second half started as the first had ended with a Northern Ireland chance as McGinn crossed for Dallas who was unmarked however his effort lacked conviction and allowed Sehic to tip the ball onto the crossbar.

Sehic then made a terrific save on 54 minutes as Norwood's free kick was flicked on by Evans to the back-post that saw Lafferty's effort somehow kept out by the home keeper before the ball dropped to Saville but his effort was blocked by Muhamed Besic.

Robert Prosinecki in his first competitive game as Bosnia manager then saw side double their advantage on 65 minutes as a miscommunication error at the back from Craig Cathcart and Peacock-Farrell allowed Elvis Saric in to tap the ball into an empty net.

It could have been three for the visitors on 76 minutes as Duljevic was denied his second goal of the afternoon when he was played in by Dzeko but saw his effort crash off the outside of the post.

Saville then had a great chance to reduce the deficit on 84 minutes as he linked up well with Davis but his effort was well blocked by Eldar Civic.

Liam Boyce less than a minute later was inches away from pulling a goal back as he was played in by the Middlesbrough man but his effort was well kept out by the left boot of Sehic.

O'Neil's side could have had a consolation in the last minute of the game as Will Grigg was picked out by Norwood but he scuffed his effort into the hands of Sehic.

However, in stoppage time Grigg did pull a goal back as he acrobatically volleyed the ball into the net after Boyce flicked the ball on but it wasn't enough as Bosnia collected the three points in Belfast.

The side are back at Windsor Park on Tuesday for a friendly with Israel.

(Article above by Joshua Bunting)

Meanwhile, fellow new arrival Josh Cullen was also in action as he captained Republic of Ireland U21 to a 1-1 draw against Kosovo on Friday and is set to play again when his side take on Germany on Tuesday.