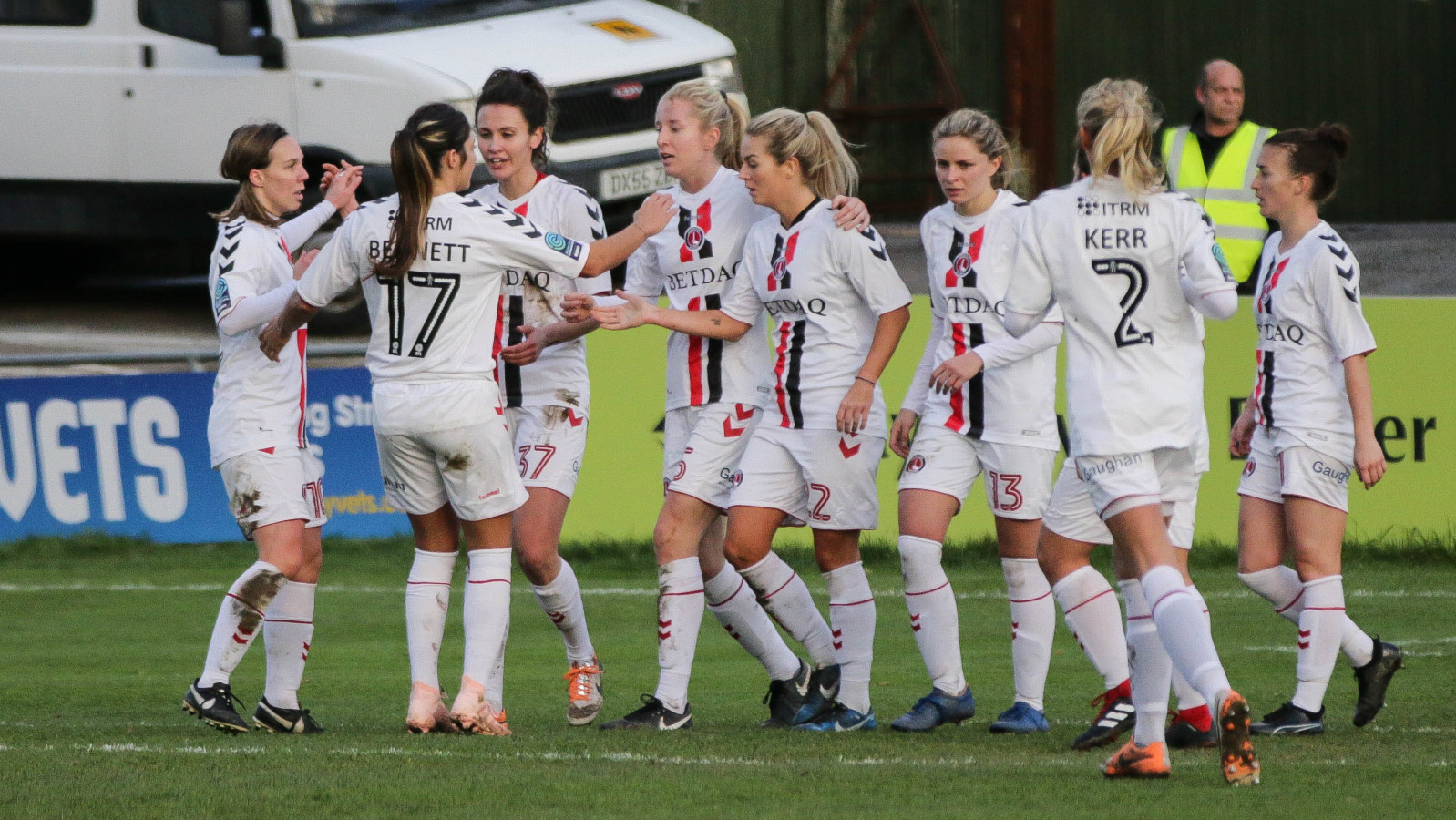 The Charlton Women’s team moved level on points with Manchester United at the top of the FA Women’s Championship thanks to a 2-0 victory over Lewes at The Dripping Pan on Sunday.

Liz Ejupi and Lily Agg struck either side of the break to continue their fine goal scoring form to help the Addicks edge what was a scrappy game on a muddy pitch in East Sussex.

The first 15 minutes were particularly cagey, with little goalmouth action to note bar a volley wide from Ejupi. The game did burst into life on 16 minutes, though, as Ellie Bailes drove forward before shooting wide. A similar fate befell an effort from Amber Stobbs.

In between those forays forward, Lewes had chances of their own, but were foiled by good defending by Charlotte Kerr and Ejupi heading a free kick clear.

The hosts then had the first real gilt-edged chance of the encounter, as Charlton surrendered possession from a defensive throw. The cross trickled across the face of goal to find Leeta Rutherford with the goal at her mercy, but the midfielder dragged her shot wide.

A couple of minutes later, on the half-hour mark, Charlton had a similarly golden chance as Bailes once again weaved her way through the Lewes defence. However, her attempted chip over Faye Baker when one-on-one was well off target.

Coombs then volleyed over from a corner and Lewes looked to pressure the visitors without ever threatening Startup.

But it was the away side who drew first blood five minutes before the interval. Charlotte Gurr played the ball down the left wing for Agg, who cut inside her marker and fired in a low cross that was turned home by Ejupi.

Charlton could have doubled their advantage just three minutes later when Agg was instrumental once again, playing Stobbs through, but Baker stuck out her leg to keep the shot out.

Again, it took a while for the second half to get into gear, despite a succession of corners for both sides that came to nothing.

Bailes was, once again, unlucky not to get her name on the scoresheet just before the hour mark, seeing her shot on the turn clip the far post and get cleared away. Baker then made an excellent stop to push a Harley Bennett volley round her post.

Lewes tried to hit back with another spell of possession, but again couldn’t make inroads into a stubborn Addicks defence. Samantha Quayle and Sarah Kempson were both reduced to shooting well off target from long range.

And Charlton netted their second of the game on 69 minutes, when centre-back-turned-central-midfielder Amelia Ritchie found herself out on the left wing. After seeing one attempted cross blocked, her follow up was pulled back to the edge of the area, where Agg met it beautifully to smash into the roof of the net and effectively finish the tie.

It could so easily have been three not long after when a close-range volley from Gurr was brilliantly met with a strong arm by Baker, the keeper again tipping round the post.

Lewes built up a head of steam in the closing 15 minutes or so as they tried to find a way back into the match. They could have done so when Danielle Lane headed a corner that had been half cleared back into the six-yard box. Kempson met it with a header of her own, but it flew narrowly over Startup’s crossbar.

The final two chances for the home side both came from Kempson from long range, and were easily dealt with by Startup.

Charlton now face a tough clash against FA Women’s Super League side West Ham United in the FA Women’s Continental League Cup at The Oakwood, Crayford on Wednesday before the Christmas break.