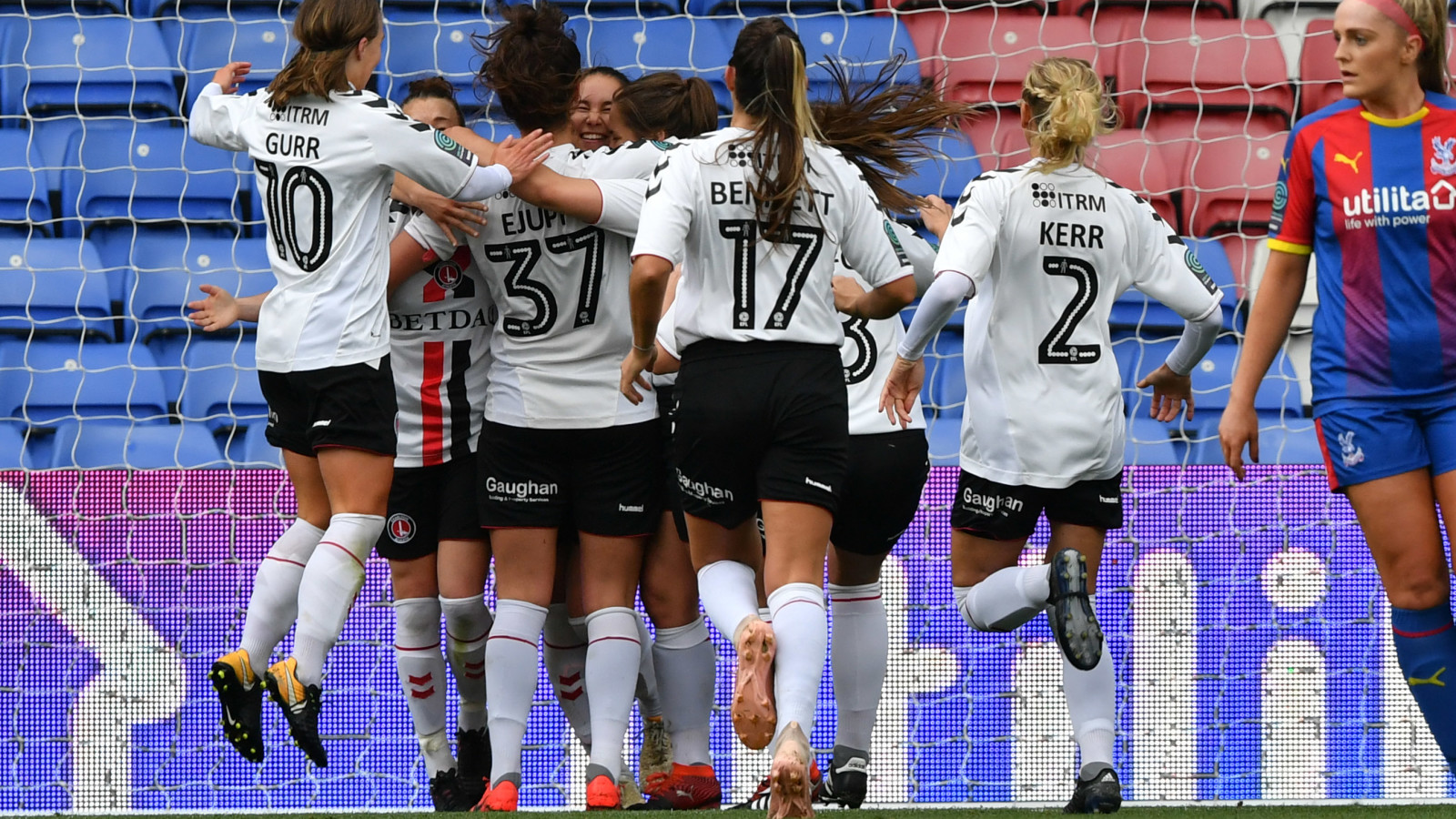 The Charlton Women’s team secured a comfortable 4-1 victory over Crystal Palace at Selhurst Park on Sunday, keeping them well in the hunt for a third-placed finish in the FA Women’s Championship.

Goals from Sara Eggesvik and Kit Graham gave the Addicks a clear lead at the interval, with Liz Ejupi netting a third with 15 minutes remaining.

The home side hit back through a Kallie Balfour penalty, but substitute Lily Agg put the game beyond doubt four minutes from time to give Charlton a 100% record in four South East London derbies this campaign.

The clash took a while to heat up, with Palace having the best of the opening exchanges. Katie Startup did well to gather deep crosses from both Kallie Balfour and Ciara Sherwood under pressure from opposing strikers.

Charlton’s first chance of the afternoon came when Graham found herself some space on the right flank and stood up an inviting cross to the far post, but Charlotte Gurr could only nod wide.

Nikita Whinnett then dragged a shot wide of the Charlton target before the visitors started to build up some momentum. Graham also dragged a long-range effort wide, but her side went on to open the advantage shortly after, with 25 minutes on the clock.

Ejupi collected the ball out on the left, poked a lovely ball through for Gurr, who whipped a low cross across the six-yard box to the back post where Eggesvik was to sweep the ball in for her first goal since arriving in England from Norway at the start of the year.

Captain Grace Coombs did well to keep her side ahead when she headed a shot off the line from a corner as Palace tried to hit back immediately, but it was the visitors who scored next, doubling their advantage.

Eggesvik was involved once again, playing the ball down the right for Amber Stobbs. The winger beat a couple of players and put it on a plate for Graham to poke home.

Stobbs had a chance to make it three herself shortly before the break, beating the offside trap and bearing down on goalkeeper Lucy Gillett, but Stobbs tried to round the stopper, who did well to get a hand on it. The ball dropped for Gurr but her shot was blocked and Palace cleared their lines eventually.

Another chance came for Charlton 10 minutes into the second period when Stobbs was hacked down 30 yards out, but Charley Clifford’s excellent set-piece slammed against the woodwork.

Just after the hour mark, Graham brought a fine save out of Gillett, as the striker latched onto a Clifford flick, turned her defender and curled towards the far corner, but Gillett flew across her goal and palmed round the post.

With quarter of an hour remaining, Charlton looked to have put the game to bed when Graham fed Ejupi for the Addicks; leading scorer to take a touch and fire into the far corner.

Four minutes later Palace saw a glimmer of hope after Amelia Ritchie was penalised for a foul on Whinnett in the penalty area and Balfour scored the spot kick. That kicked off a five-minute spell of pressure from the home side, with Meghan McKeag and Balfour all seeing chances go begging.

Charlton punished them with moments of the game left when Graham chased down a back-pass, blocked Gillett’s clearance, recovered the ball and unselfishly squared for Agg to tap home the fourth.

It was almost five in stoppage time as substitute Ellie Dorey fired a thunderbolt inches over the bar.

Charlton go into their final game with Leicester City at The Oakwood on Sunday, May 11 just one point behind Durham in third place.