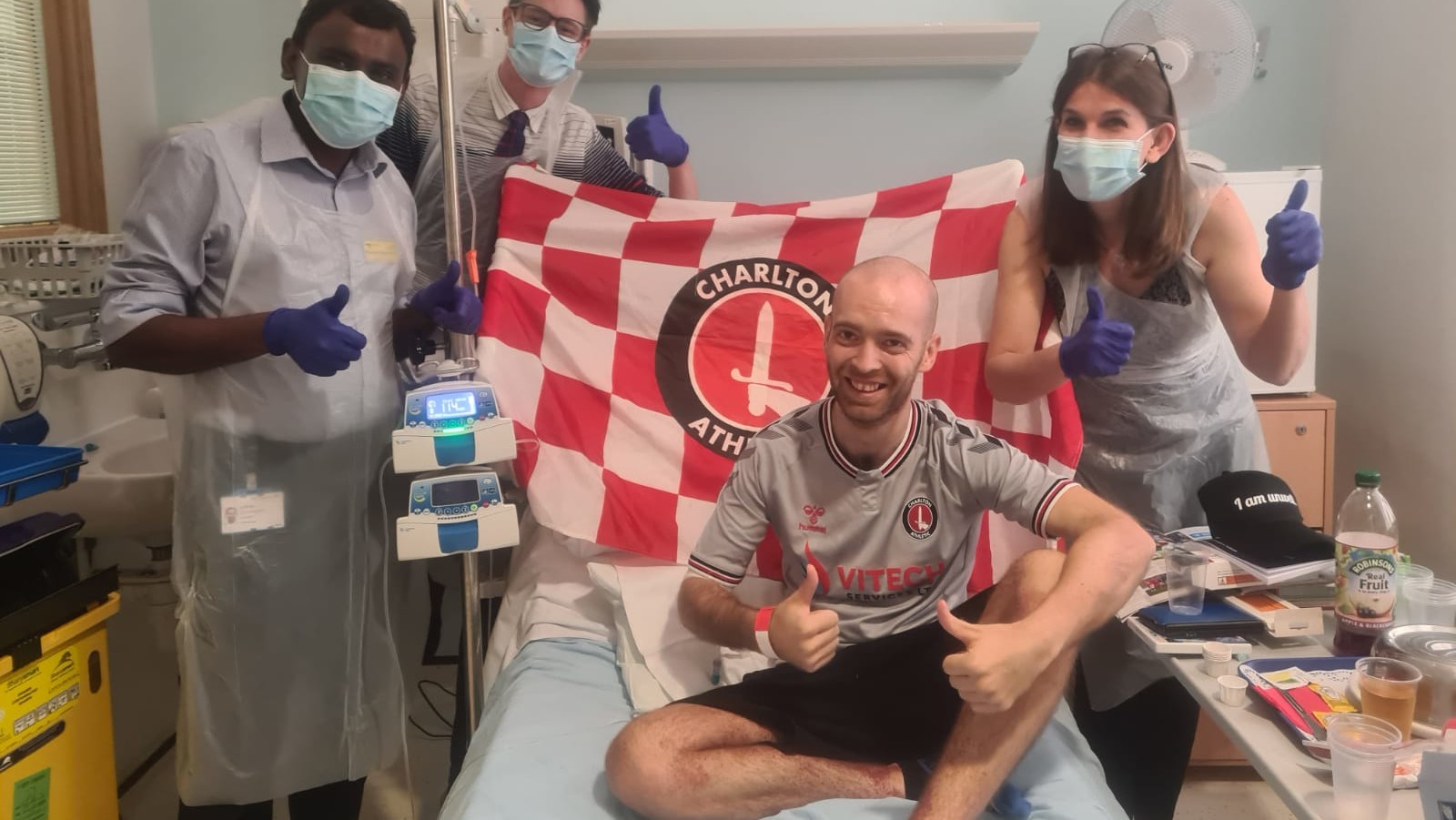 A lifelong Addick is encouraging fans to join Anthony Nolan’s stem cell register to support those in need.

An ardent Charlton fan born and raised in south London, Adam Riley was diagnosed with severe aplastic anaemia in 2015 but fought through it with blood transfusions and medication. However, after six years in the clear, the 27-year-old thought he had relapsed on 10 May, only to discover he had leukaemia.

Now undergoing chemotherapy at King’s College Hospital, Adam is awaiting a match for a bone marrow donor from Anthony Nolan, and is encouraging fans to support the charity and donate blood.

“It has been a strange experience,” explained Adam. “There’s nothing quite like being told you’ve got cancer. It was obviously a shock, but I know how lucky I am to be in the UK and benefit from the NHS with some of the best hospitals in the world.

“I have had a lot of great support from friends and family, and the NHS, of course, is unbelievable. It’s hard to describe how good they are considering what they’ve gone through in the last 18 months with COVID and they’re still standing. It’s pretty phenomenal. With what the NHS have done so far for me I will forever be in debt to them.”

The prospect of fans returning to The Valley next season is invariably at the forefront of Adam’s mind, who, prior to the COVID-19 pandemic, invested his time travelling up and down the country supporting the Addicks.

“I can’t wait for football to return with fans and I’m very optimistic for Charlton’s promotion prospects next season. My initial goal was to make it to the first home game of the season, but I don’t think it’s realistic at the moment. My goal currently is to make whatever home game is closest to Christmas. I’m roughly, depending on how everything goes, 20% through everything. I have had my first round of chemo so I’m now just going through all of the side-effects and then I’ll have the second round. Hopefully then they’ll find a transplant for me. You then have to have 100 days post-transplant resting.

“When I spoke to some of the staff at the NHS about getting the picture with the Charlton flags they were really excited about it. They aren’t Charlton fans unfortunately but they were aware of the club, and one of them did actually comment about how good Charlton are in the community. I imagine quite a lot of Charlton fans have needed blood transfusions in some way or know people who have had blood transfusions, and just donating blood is a good thing to do.”

Fans can follow Adam’s journey via his blog: https://adambackinhospital.blogspot.com/.

“When I was in hospital back in 2015 I found that blogging was a good way for me to keep on top of it and stay positive, and to help others facing my experience. Though I did not expect to be back in hospital with cancer six years later, I am doing it again with the same goal of helping others, as well as myself mentally.

“I try to keep it light-hearted but also honest about how tough it can be fighting cancer, and I post something every week or fortnight. It has links in there to Anthony Nolan, bone marrow registers, and anything my mates are doing to try and raise money for those kinds of charities and blood donations.”

Adam’s friend, John Fiddes, recently reached the Ben Nevis summit, accompanied by the Charlton red, in aid of Anthony Nolan, and supporters can donate to the fundraiser here: https://www.justgiving.com/fundraising/john-fiddes2.