CACT celebrates a year of achievements at the House of Lords 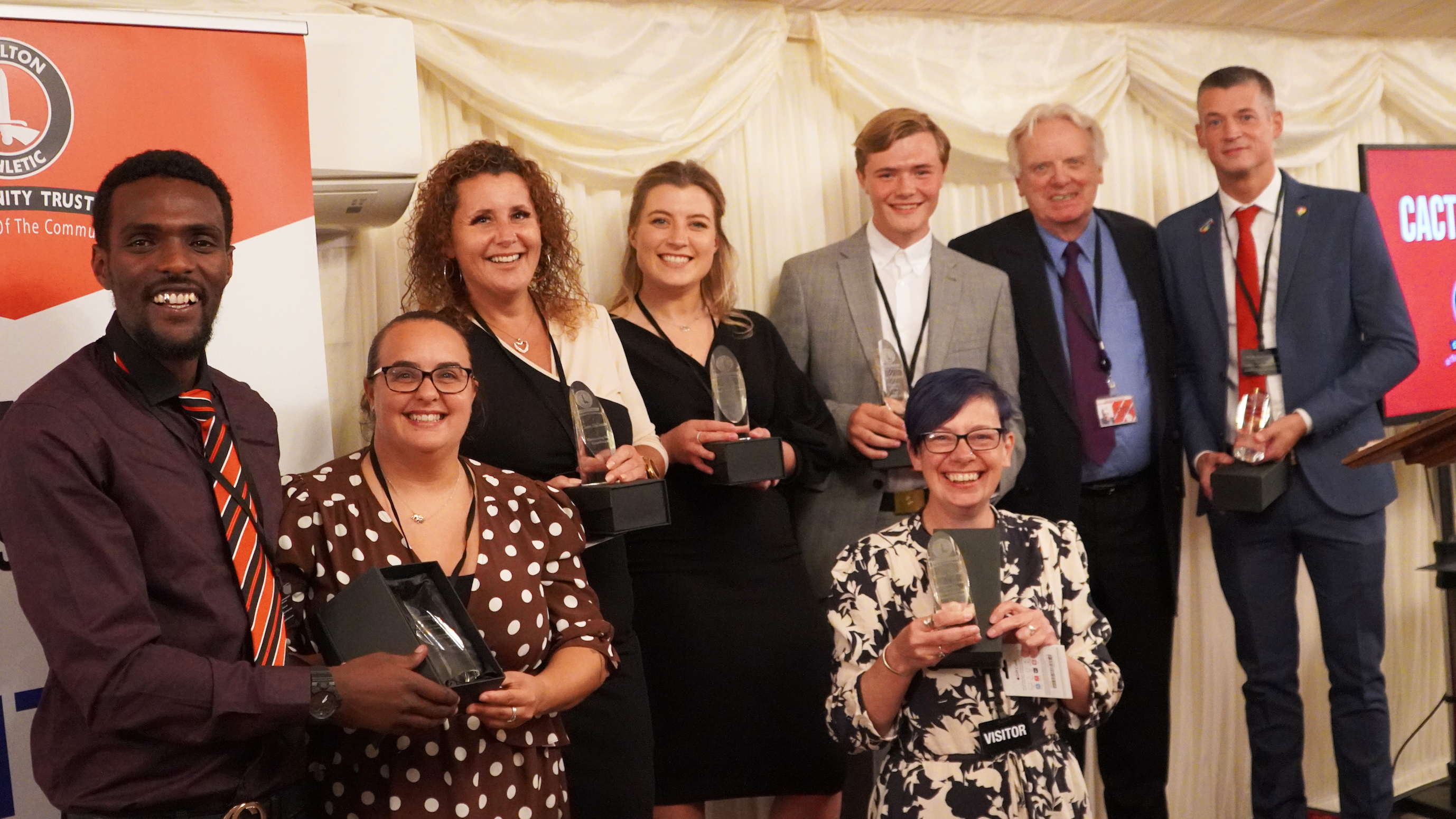 The CACT Awards celebrates the fantastic work and achievements of participants, partners, and programmes across the past year.

Lauren Ashton, a member of Young Greenwich’s Avery Hill Youth Hub, opened the event with a speech about how the youth service has helped her since she first became a member, before introducing the evenings host Lord Grade.

On the night, Lord Grade announced some of the key figures from CACT's latest annual report including committed expenditure in the local community for the 2021/2022 financial year, which totalled £6.3 million. A new organisation-wide Impact Report has calculated that CACT’s programmes generate an incredible annual social value of £49.6 million which represents £9.52 of value to society for every £1 invested.

“All the talk in football is about the money that goes out through the players’ entrance to the agents and the players and so on, so when you see a £6m sum being raised to help the community, it’s so special and it says so much about what Charlton Athletic stands for and I wish the rest of football was as good at it as we were.”

In the 2021-22 financial year, CACT worked with over 25,000 people, empowering communities and changing lives across South-East London and Kent. This includes:

The first award of the evening was Participant of the Year under 18 , sponsored by University of Greenwich and won by Apprentice Sports Coach Alfie Maloney. Alfie first joined CACT as a student of the Post 16 Football & Education Academy. Alongside his studies, he kept himself busy with casual coaching work on CACT’s holiday football courses in Sevenoaks. Alfie sadly lost two of his closest friends to cancer so wanted to raise awareness with three fundraising events: 100 press ups every day for a month; 12,000ft skydive; and run 100 miles in a month.

“I think his achievements are brilliant, congratulations to Alfie for winning the award. The awareness he had built, the fundraising work he has done, it’s unbelievable for such a young person to do such amazing work. I think he’s a great example of how you can take one opportunity and you never know what that’s going to lead to.”

The winner of the Participant of the Year over 18 award was Gary Ginnaw.

Gary has been heavily involved in CACT Invicta as a player, manager, and chair since its launch in 2017 when it became formally affiliated with Charlton Athletic. Gary has been the driving force behind Invicta’s success for five years now; CACT and the club’s Head of Equality, Diversity and Inclusion, Dr Michael Seeraj, described Gary as “a force of nature”, saying “Invicta would not be where they are today” without Gary.

Speaking on the night, Gary said:

“We recently celebrated 5 years since we affiliated with CACT, Invicta is going from strength to strength, we’re now operating in three leagues, which is a credit to everybody involved and the support from CACT and the football club.”

The winner of the Sir Maurice Hatter Outstanding Contribution to the Community Award, sponsored by Regular Cleaning, was Cherie Barnet.

Cherie is the Community Champion for Morrisons in Thamesmead, nearby to Young Greenwich’s Hawksmoor Youth Hub. Cherie explained that her role involves “reaching out to all different levels of the community to see what support as a store we can offer groups”.

“During COVID we did a lot of work with people that were isolated, people that couldn’t get out and do shopping. People that basically couldn’t do their normal activities, so we started working with Cherie from there, making sure that nobody was left alone during that lockdown period.”

The winner of the Programme of the Year award, sponsored by RSK, was CACT’s County Lines & Exploitation workshop.

The aim of the workshop is to educate young people about the dangers of county lines, in particular those that are going into secondary education settings. Over 6000 young people have taken part in the workshop since its launch last year.

“The exciting value that Charlton are continuing to bring to the local community and continue to grow really throughout the Kent County as well. It was probably one of the biggest deciding factors in why RSK wanted to partner with Charlton, obviously the history of them doing it and us being able to branch that out into the environmental mindset as well.”

Partner of the Year was sponsored by long-standing CACT Partner KWisdom Consulting. The winners of this award were Kent and Medway Progression Federation (KMPF), a partnership between the four universities within Kent. They aim to support under-represented young people to consider higher education as an option.

KMPF designed and a delivered a bespoke careers programme for young people to showcase all the career opportunities available within sport and how they can get there with the help of higher education.

The last award of the evening was Outstanding Staff Contribution, presented by Lady Irene Hatter, and won by Hawksmoor Unit Manager Claire Hallinan.

“Claire goes the extra mile in terms of her passion around delivering to the community she serves. What you find with Claire is that nothing is too much trouble, she will push you as an individual and as an organisation to stretch anything we’ve got to make sure it’s delivering for the young people.”

“When I founded the company 23 years ago it was about the business trying to make a difference and delivering great customer service. So getting involved with CACT was a way of really showing that our values are authentic and that we want to try to help and contribute to what is going on, in a tiny way.”

To read more about CACT’s work over the past year, take a look at the latest annual report.

If you would like to get help support CACT’s work in the local community, please consider becoming a Friend of CACT by setting up a regular donation, by clicking here.

Take a look through some of the best moments of the night in the gallery below. 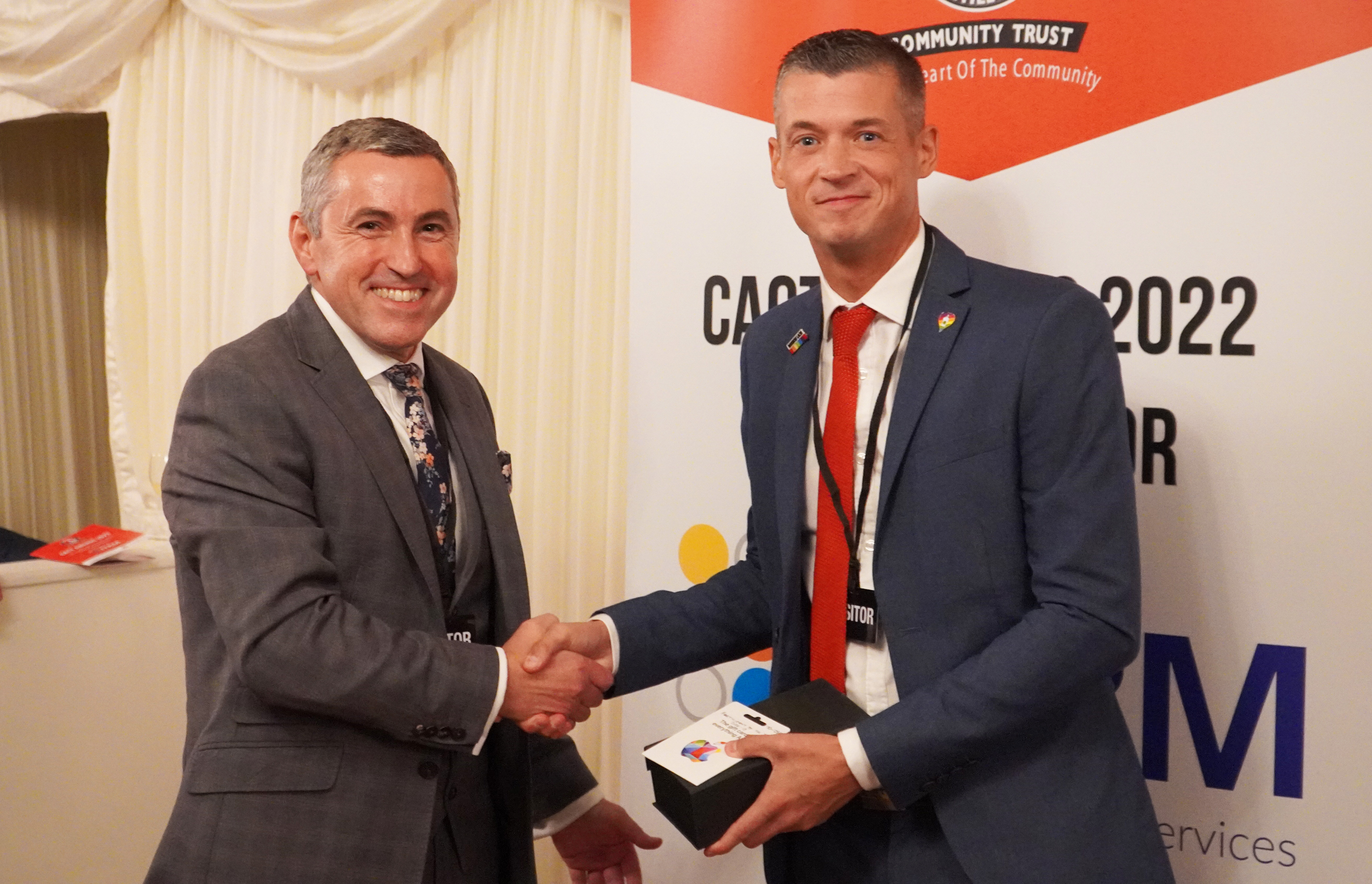 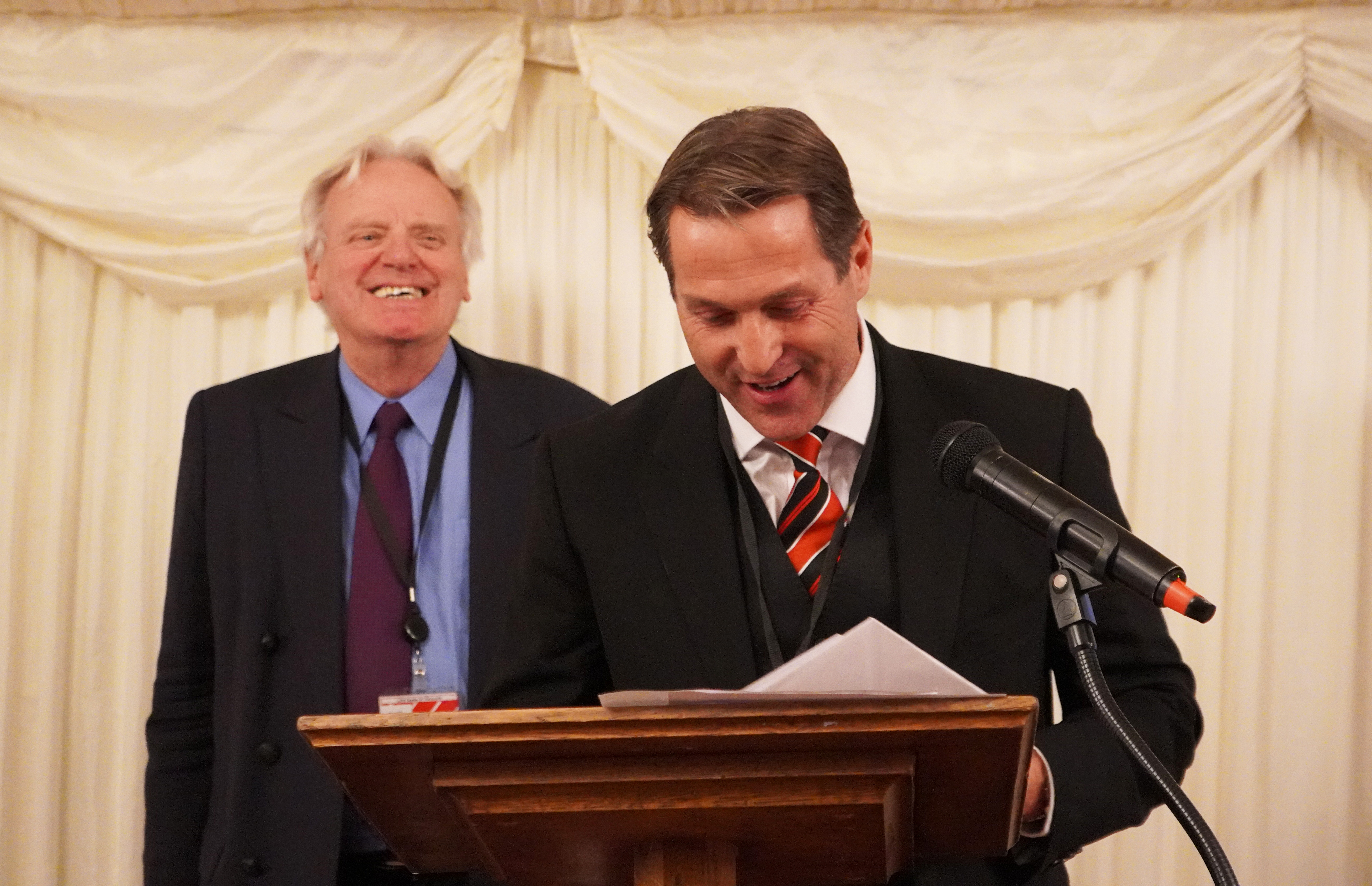 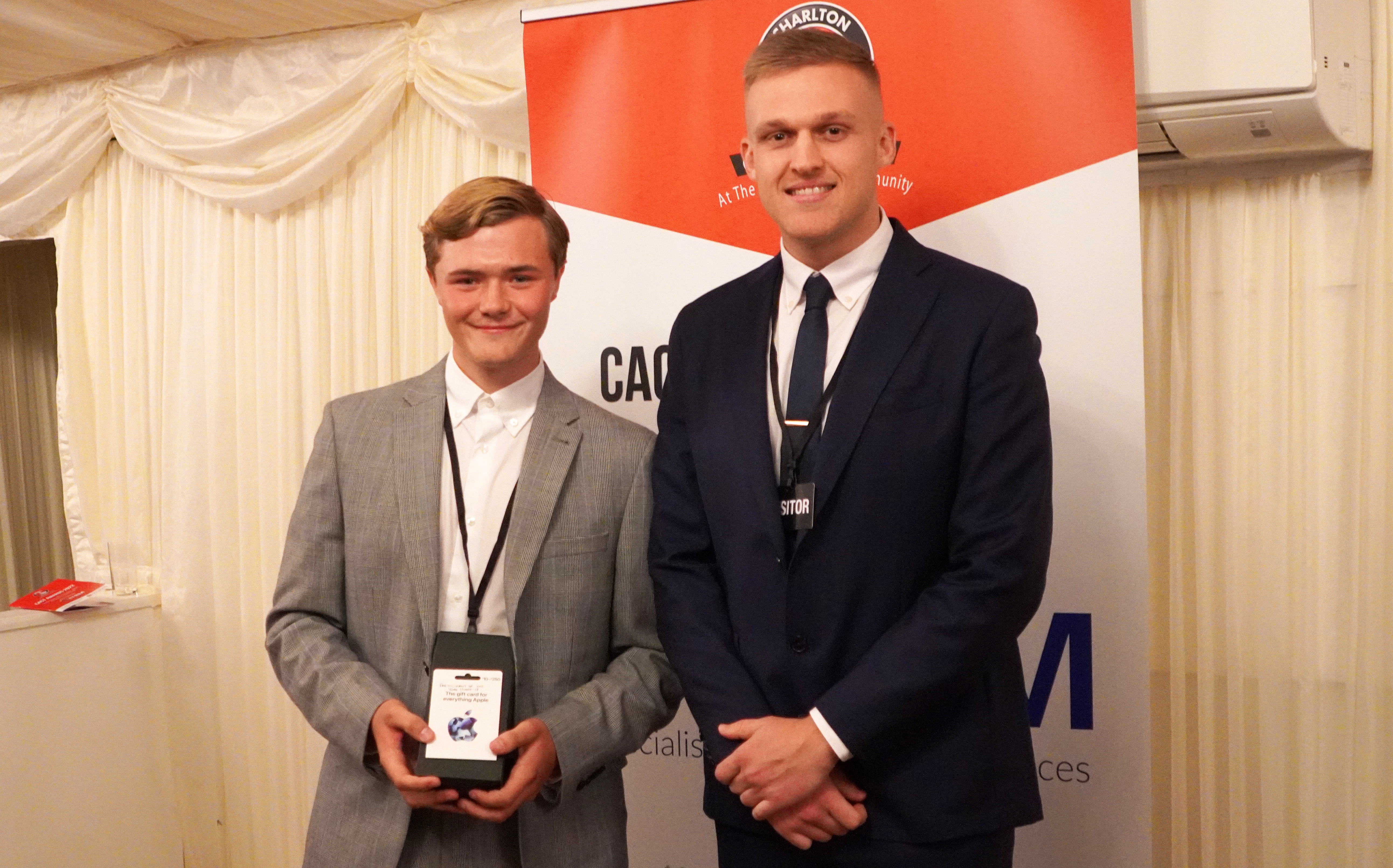 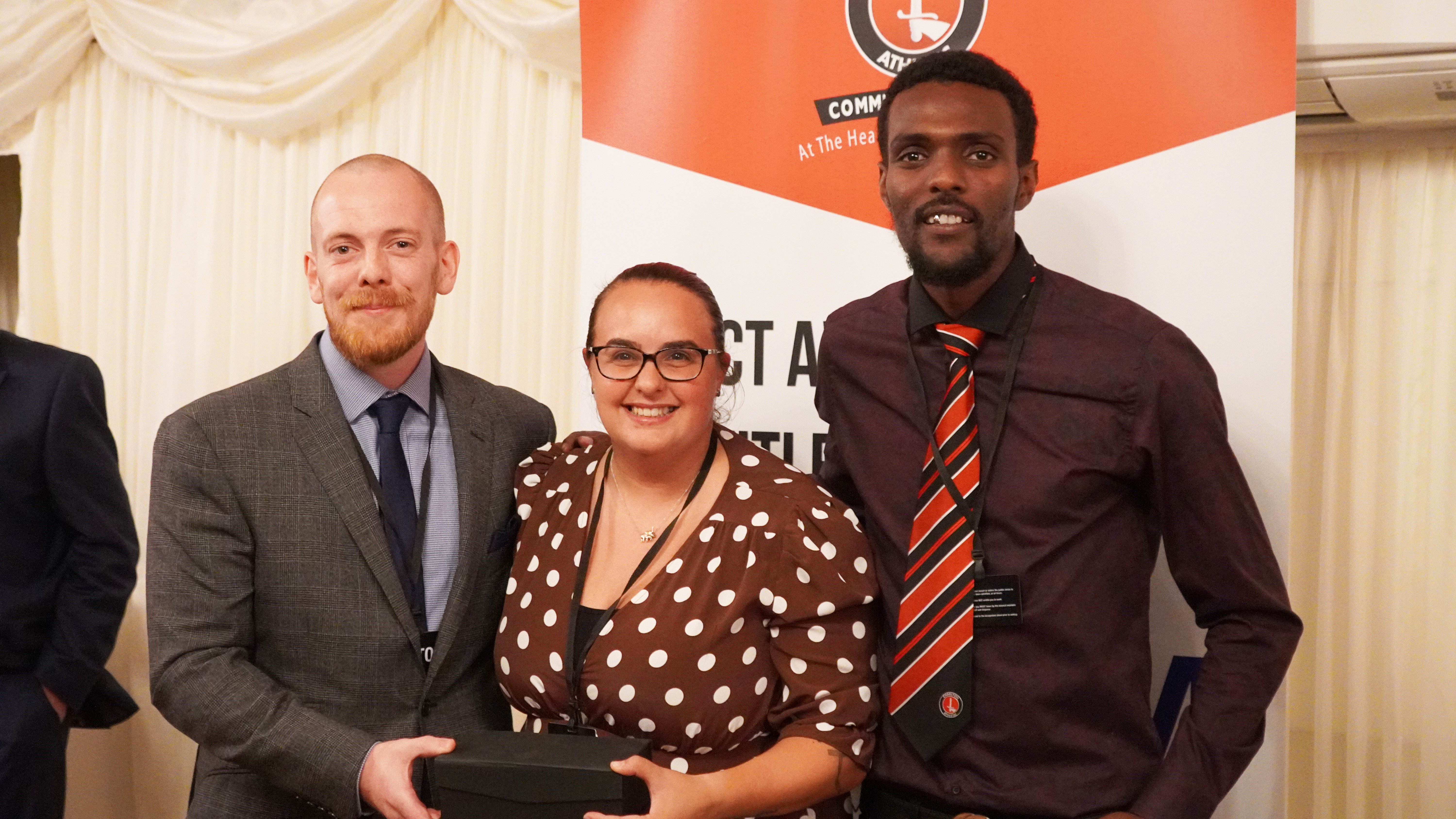 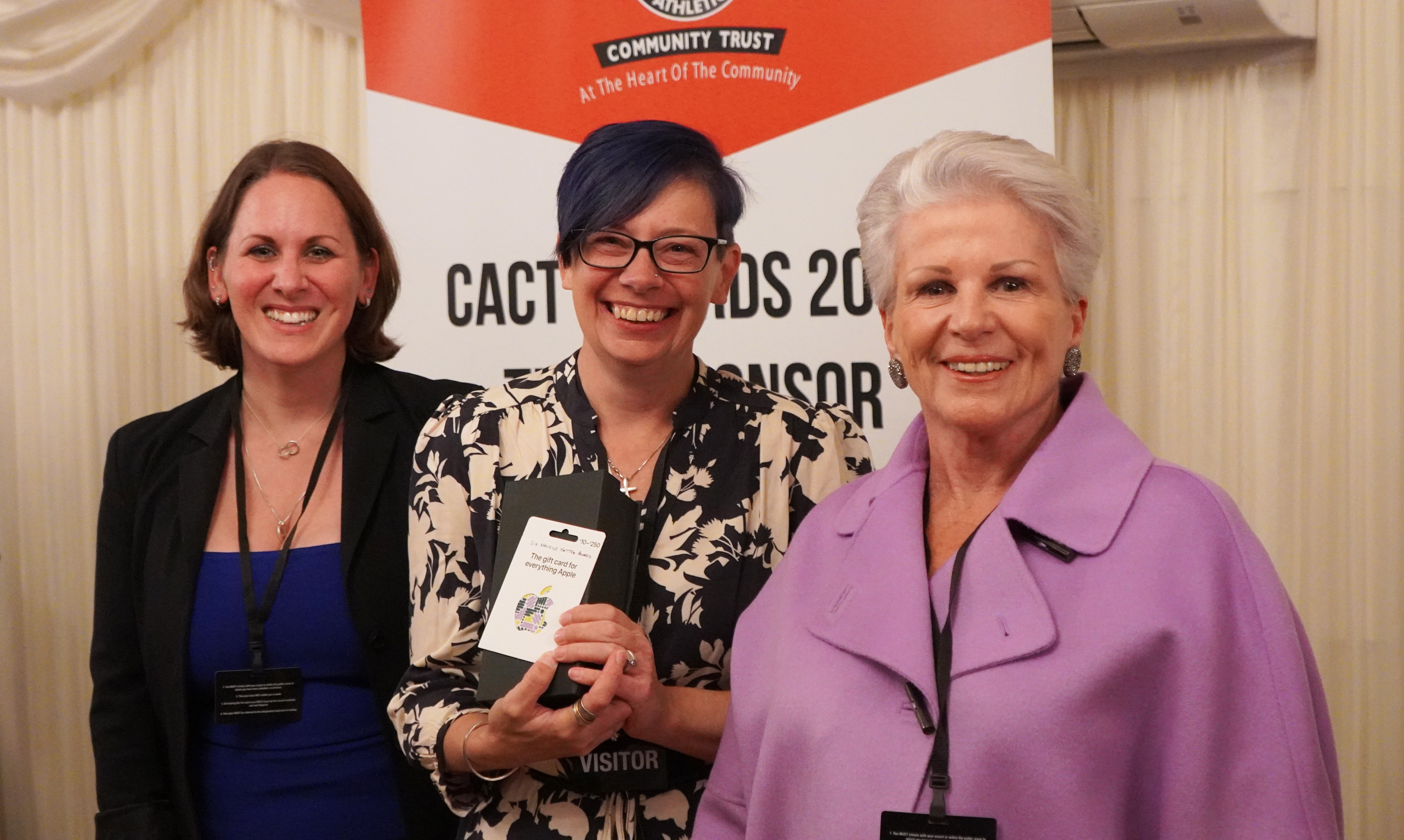 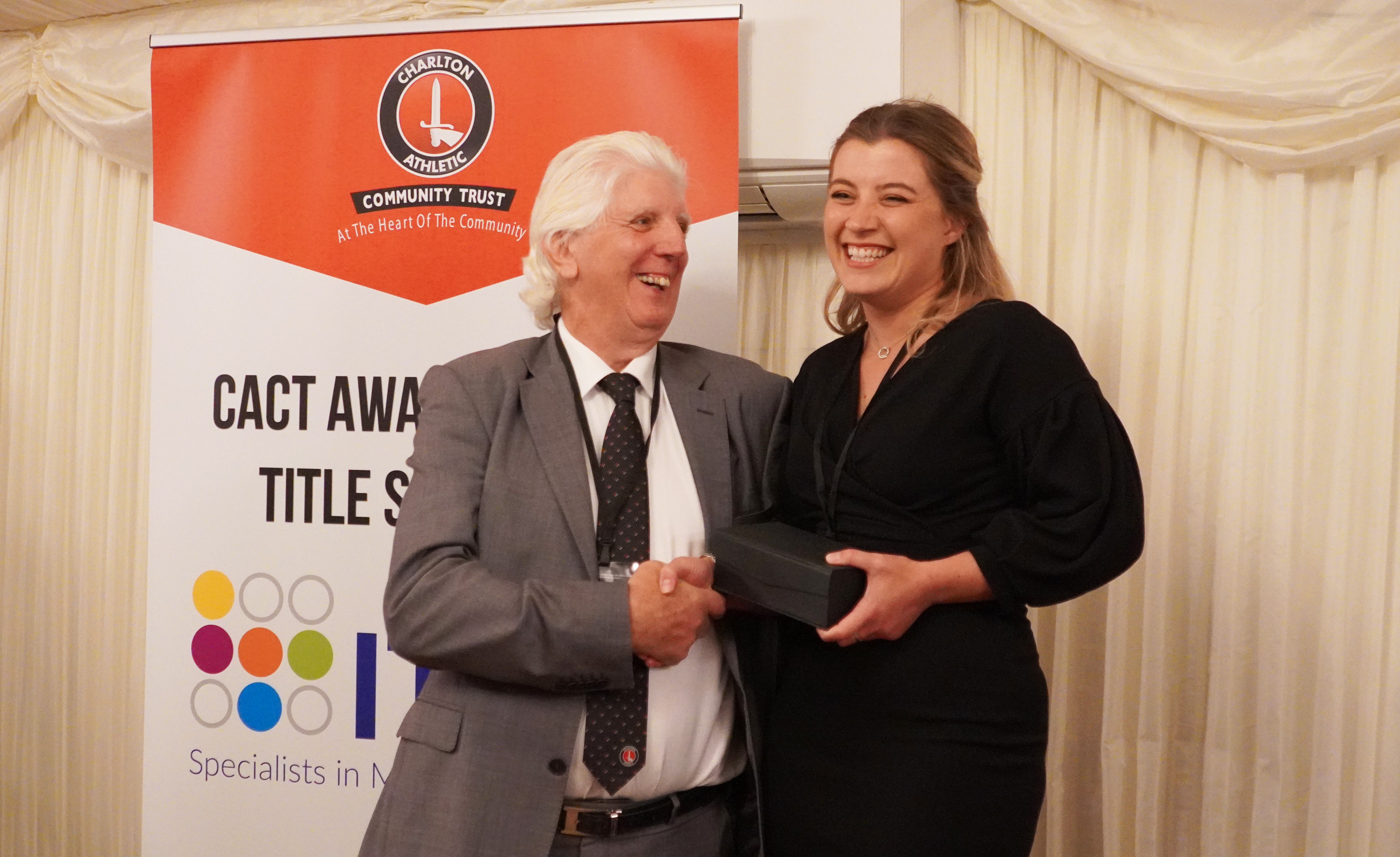 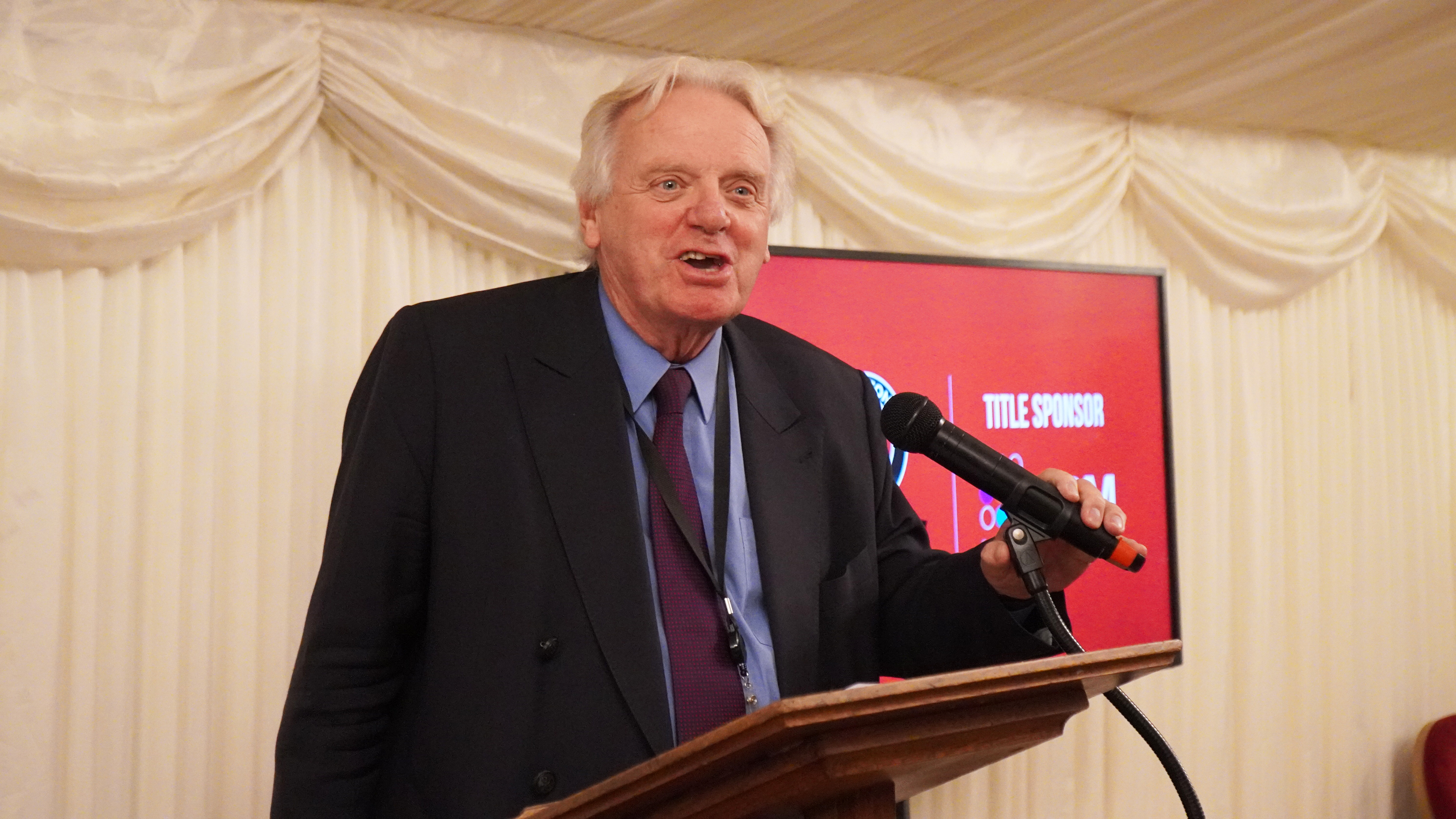 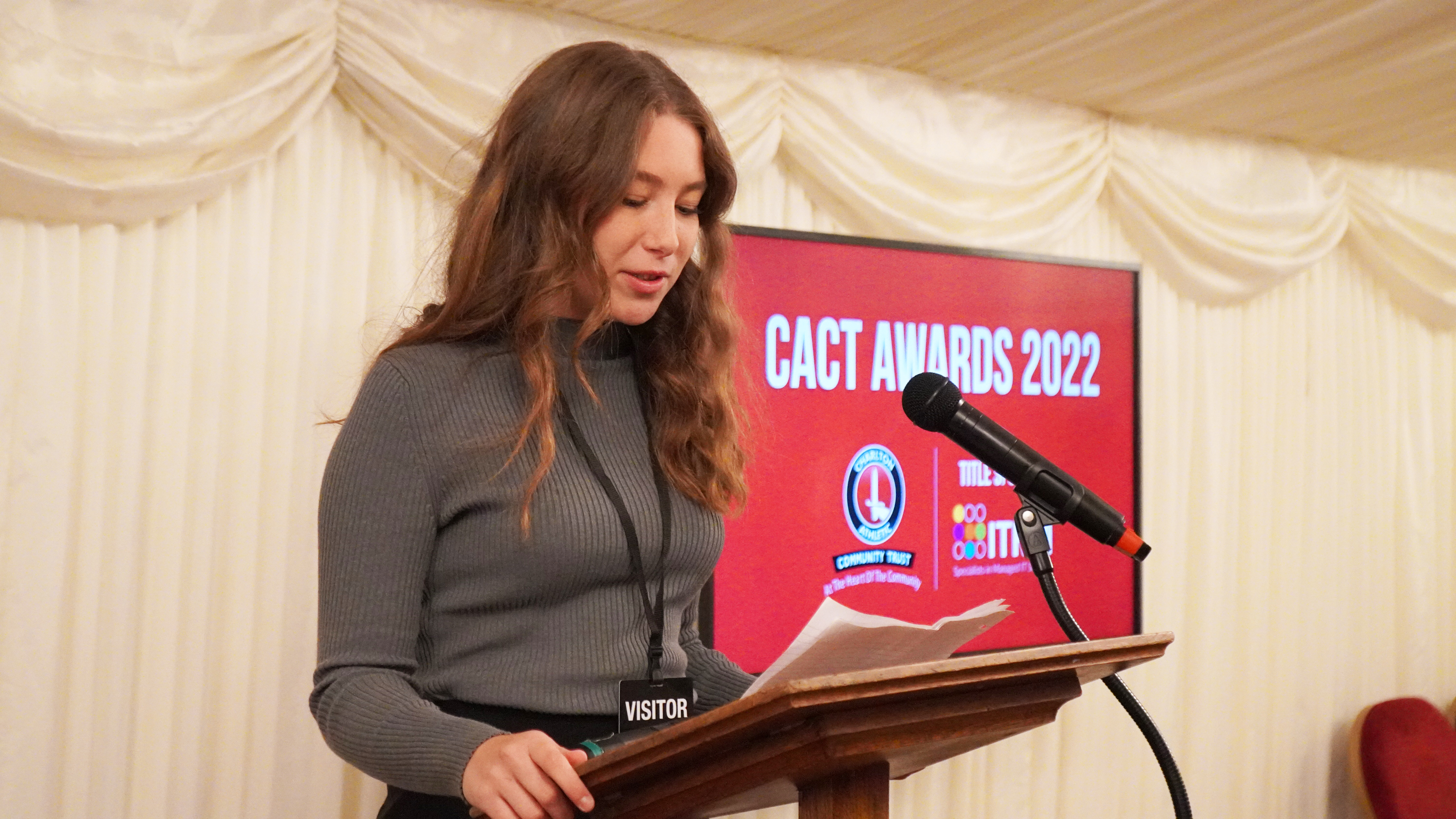 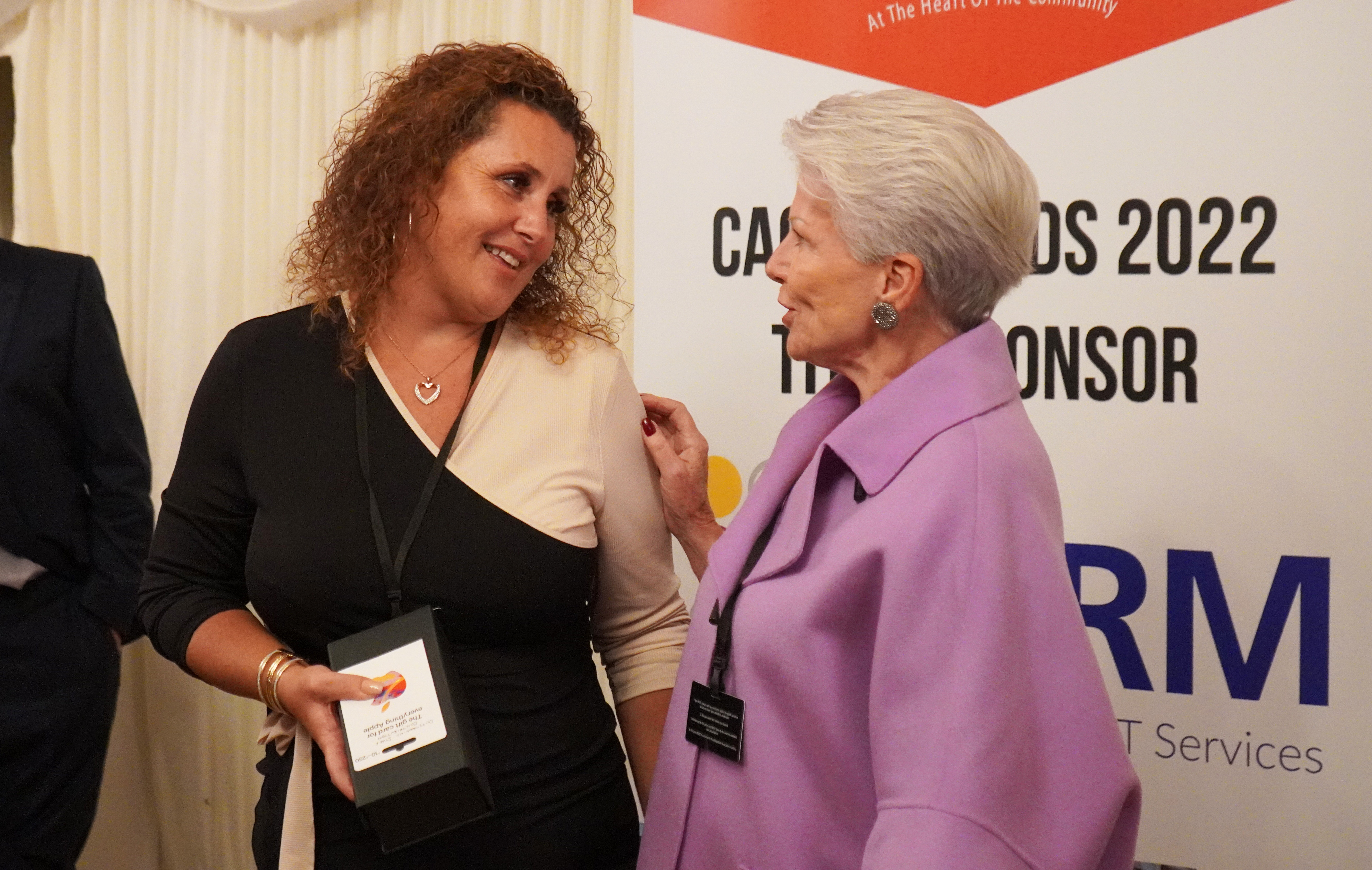