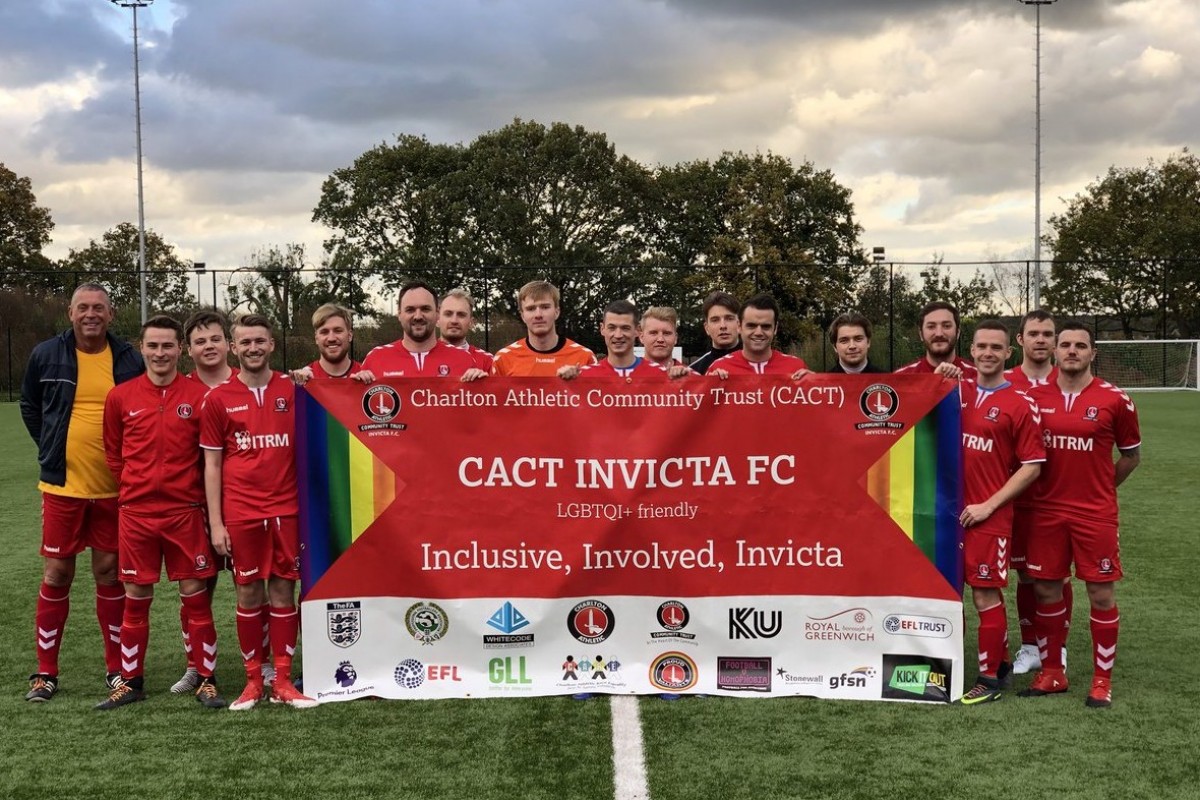 CACT Invicta FC (CIFC) hit double figures against Stonewall 3rds on Sunday to go third in the London Unity League and make it three wins on the spin.

Back at home after away wins against London Romans and Leicester Wildecats, CIFC eased past their opponents to continue their good form.

It’s been a busy period for CIFC, the first LGBTQI+ team affiliated to a professional football club’s community trust. Sunday’s game was one of two they face in the space of a week. Players also attended a recent event run in partnership with L&Q to support Stonewall’s Rainbow Laces campaign to tackle homophobia in sport.

One of only two unbeaten teams in the league, CIFC are third, with the best goal difference in the division, and games in hand on both teams above them.

Tommy Whelan opened the scoring in the first minute, making one of his many forward runs from midfield. Stonewall levelled soon after, but striker Dan Goodwin slotted the ball under their keeper within seconds to make it 2-1. Whelan and Goodwin both doubled their tally to make it 4-1 before Stonewall pulled one back.

For a while, it seemed like the score would remain 4-2, but substitute Sam Fordham fired into the top corner from outside the box soon after the hour mark to end Stonewall’s comeback hopes.

Whelan headed home the sixth to complete his hat-trick, converting a cross from Goodwin, who got his soon after. Both then grabbed their fourth, while Goodwin added his fifth late on to become the league’s top scorer.

The forward is averaging two goals a game, an impressive feat, but it was another excellent team performance, with CIFC firmly establishing themselves as title challengers and going into their next game on a high.

“We’re delighted to have picked up another excellent result, with the boys particularly showing how good they are in front of goal.

“We’re still unbeaten as CACT Invicta, having made the ideal start to the season, and we’ll be looking to continue our good run for as long as possible.”

Ginnaw and his side host Soho FC, who are currently without a win, at Sparrows Lane Training Ground at 2.30pm on Sunday 12 November. Admission is free, and supporters are encouraged to attend.

"This was a fantastic win for Invicta. They’ve started the season very well, and I hope they continue this rich vein of form.

"I’d also like to thank them for supporting the L&Q One Goal Rainbow Laces launch on 26 October. The event was a great success".