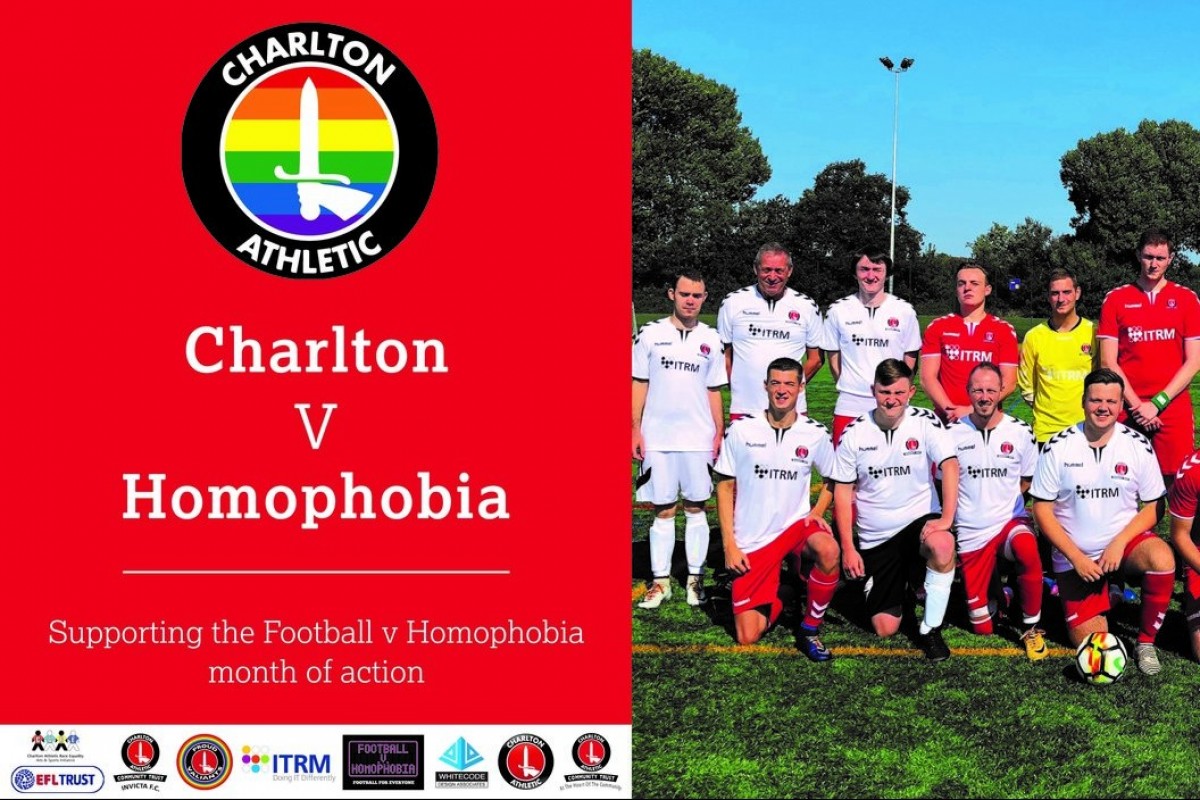 The Addicks home game against Southend United on Saturday 9 February will be dedicated to fighting homophobia as part of Football v Homophobia’s month of action.

This will be the third year a Charlton matchday has been dedicated to the cause as part of the club's and Charlton Athletic Community Trust’s (CACT) work to fight homophobia in football.

Activity around the day will be led by Charlton’s LGBTQI+ supporters’ group, the Proud Valiants.

This year the Proud Valiants will host a post-game reception which will include a talk on diversity from Charlton legend Paul Mortimer, who is also the supporter group’s ambassador. Activity will also include pre-match video interviews, use of rainbow corner flags and much more.

The Proud Valiants were last year nominated for the Fans For Diversity Award in the 2018 Football Supporters' Federation Awards for the work they do with the club.

"We are honoured that for the third year in a row the club are willing to show their commitment to such an important campaign by dedicating a league match to it.

"In the modern world homophobia, transphobia or any form of prejudice should not be acceptable – this should apply to all sports including football. When a fan enters a stadium, they have the right to feel safe and for the next 90 minutes be transported through the highs and lows watching the sport they love.

"The Valley creates an amazing atmosphere with an awesome squad and the best fans of any club anywhere – fans who will not tolerate hate based on sex, class, race, disability or sexuality.

"Last year proved to be remarkable time for the Proud Valiants, being nominated for a Fans For Diversity Award and to then secure Paul Mortimer (a Charlton Legend) as our Patron. We look forward to the match against Southend United, the upcoming Charlton v Homophobia tournament and a number of other special events this year."

"It is important that all football clubs take the lead in supporting this campaign and I for one am looking forward to playing my part in what is going to be a fantastic day of activities designed to educate all and raise awareness about the importance of Charlton's LGBTQI+ supporters' group.

"The match day experience should be all inclusive and events like these go a long way to help educate those who might not understand the impact homophobic behaviour can have on their own fans.

"Yet again CACT is leading the way in promoting the Proud Valiants who are hosting the day. I am honoured to be the Patron of the Proud Valiants and look forward to meeting as many fans as possible who will definitely enjoy the afternoon's entertainment."

The club, working with CACT, are leaders in fighting homophobia in football. Activity includes the running of CACT Invicta, who in 2017 became the first LGBTQI+ friendly football team affiliated to a professional club's community trust.

Representatives from the team are also set to attend February’s game. The club and Proud Valiants run the now annual Charlton v Homophobia tournament, which had a record six teams take part last year. CACT, CACT Invicta and the Proud Valiants also played a key role in the Charlton family being represented by a float at Gay Pride in London over the summer.

For more information on how to join the Proud Valiants please email proudvaliants@gmail.com.