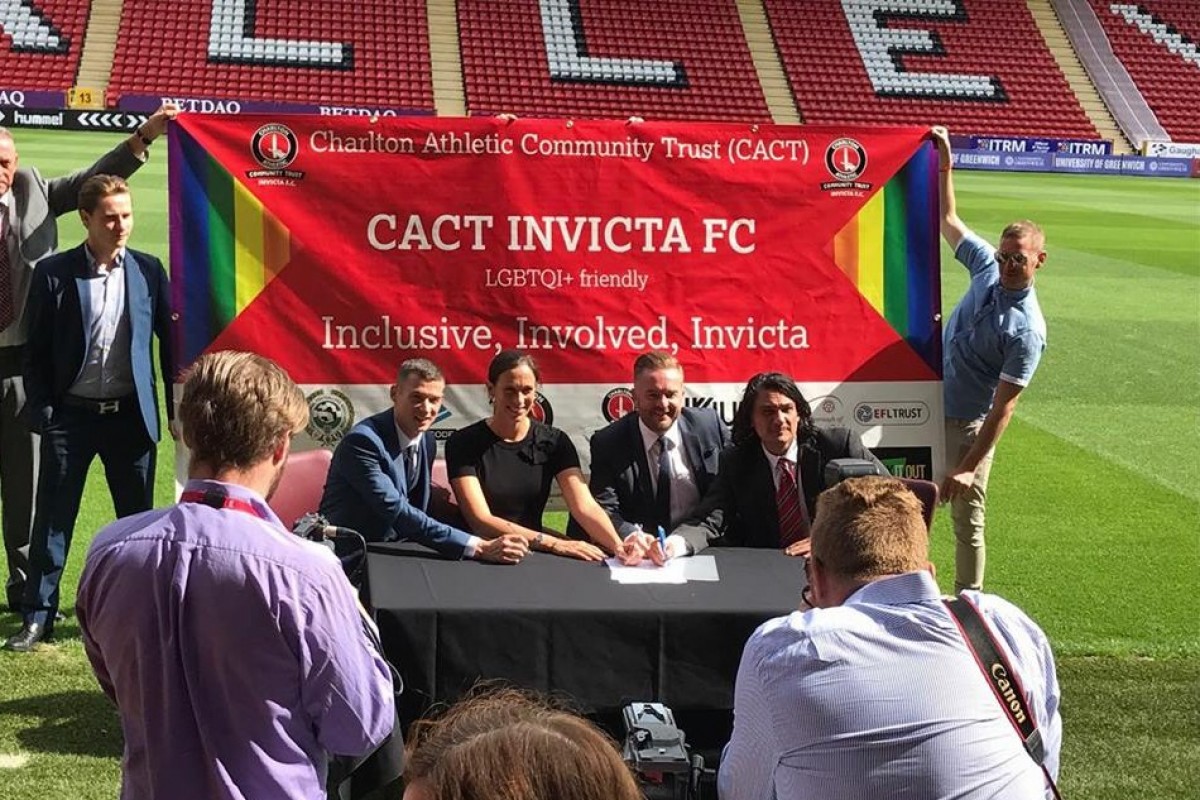 We are delighted to announce that Charlton Athletic Community Trust (CACT) will become the first professional football club’s community trust in the UK to establish a dedicated LGBTQI+ friendly football team. The formal launch of CACT Invicta FC (CIFC) took place on Thursday 24 August 2017 (2:00pm), at The Valley, home of Charlton Athletic FC.

In line with the mission and values of CACT, and the community ethos of the Club, CIFC will be committed to providing structured playing opportunities to members of the LGBTQI+ community and their supporters, as well as supporting initiatives specifically designed to tackle discrimination and promote equality.

The House of Commons Culture, Media and Sport Committee Report, Homophobia in Sport, published in February of this year, emphasised that: ‘homophobia was emerging as a bigger problem in football than . . . other forms of discrimination’. Furthermore, in highlighting ‘how things can change’ the Committee clearly stated that: ‘we recognise the importance of safe and welcoming environments in which to participate in sport for the LGB community and believe that LGB-friendly sports clubs go some way towards addressing the problem’.

• Gary Ginnaw, Player-Manager for CIFC said “There is no place for prejudice in the game. Charlton was at the forefront of the fight against racism in football and the Club now is leading the way in the fight against homophobia in football. The establishment of the first ever Professional Football League Club dedicated LGBTQI+-Friendly Football Team, CACT Invicta FC, is a monumental step and will go a long way in ensuring discrimination due to sexual orientation or preference is eradicated from the game.”

• Katrien Meire, Charlton Athletic CEO said: “We are proud to be involved in this important launch that promotes positive change and inclusion. The Community Trust and CACT Invicta have put in a lot of work to get us to this point and we’re pleased as a club to support in whatever way we can. We’re looking forward to seeing CACT Invicta wearing the Charlton colours this season. Sadly homophobia is still a problem in football, and one we, as a club, take very seriously and are proactive on. Hopefully others can take inspiration from CACT Invicta to further promote positive change in the sport.”

• Dr Michael Seeraj, CACT Head of Equality, Diversity and Inclusion, said: “Charlton has a long and impressive history of pioneering anti-discriminatory work in football and communities. In relation to tackling racism, Charlton led the way 25 years ago in partnership with the Royal Borough of Greenwich, with the establishment of the Charlton Athletic Race & Equality (CARE) Partnership, which has grown from strength to strength. We are incredibly proud to bring the learning from this rich and important history, to now engaging with the LGBTQI+ community. The Charlton v Homophobia football tournament organised by the Proud Valiants, Charlton’s LGBTQI+ Supporters Group, was an incredible success and we are fully committed to continuing to promote equality in all areas of our work.”

• Paul Elliott MBE (Chair, FA Inclusion Advisory Board) said: “Charlton have an incredible record of engaging with under-represented groups. I am honoured to be an Ambassador of the CARE Partnership, who led the way in promoting race equality. Establishing an LGBT friendly football team, to provide opportunities for the LGBT community and their supporters to take part in football, demonstrates their pioneering and forward thinking approach. The launch of CACT Invicta FC is a landmark event.”