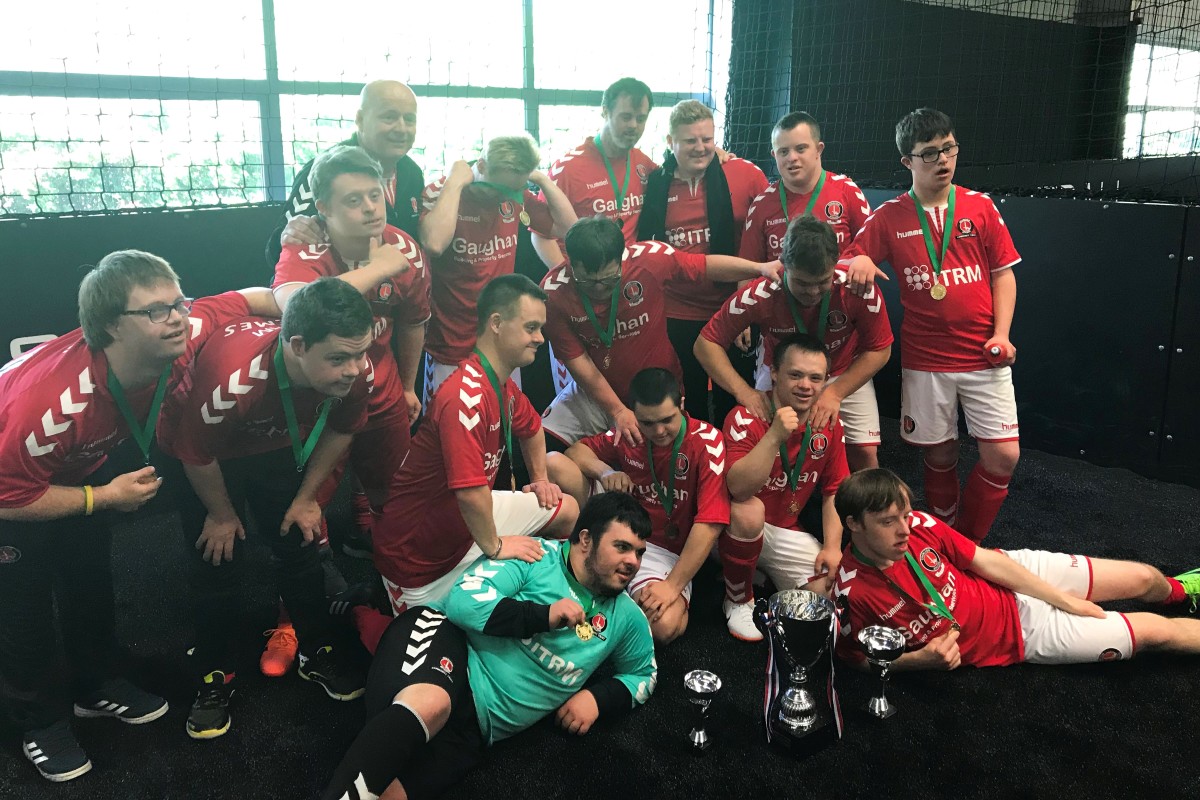 14 Upbeats travelled up to this year’s tournament, split into two teams: Upbeats Addicks and Upbeats Valiants.

Organised by the Down’s Syndrome Association, the DS Active National Festival brought 24 teams from across the UK together, with more than 150 participants in total.

The Upbeats travelled up to Birmingham the night before, staying in the Arden Hotel near the National Exhibition Centre with their families and CACT coaches.

Upbeats Addicks were drawn in a group alongside Merseyside Blues, who they beat in last year’s final, and took on in their opening game. 1-1 midway through, it finished 3-1 to the Upbeats, just like last season’s final.

The Addicks won all five group games, seeing off the likes of Millwall Community Trust and Fulham FC Foundation’s DS teams, who they beat 5-0 and 4-1 respectively.

Jack Lyons was the Valiants’ top scorer, with nine goals in his five matches. But defeat to QPR in the Community’s side meant they missed out on qualifying for the semi-finals on goal difference.

Upbeats Addicks got there, however, and beat Lincoln 4-0 to set up a final against Bristol and Swindon’s combined team, who triumphed against Arsenal Community’s North London United in the other semi-final.

The Upbeats started the game strongly and found themselves deservedly 4-0 in front before half-time.

All Stars pulled one back but a fine right-footed drive from Jack Wood soon made it five and the Upbeats went on to cruise to victory.

“My first weekend coaching the Upbeats in a competitive way was great fun! The atmosphere was incredible and everyone was so welcoming. What an amazing experience!”

The Upbeats were similarly thrilled.

Malick Irmal, who was appearing in his fifth tournament, said:

“Charlton had more power, more energy; we did good! This feels like our Champions League final”.

James Barnes, who has been involved in the programme since the start, said:

“I feel overwhelmed. It was an amazing performance by the Upbeats. Let’s do this and win next year’s DS Active tournament and bring that back to Sparrows Lane too.”

William Ely, who scored a brace in the final, said:

“I did my best out there and it was a great day. It’s eight times in a row that we’ve won it, but I want to win it again.”

Another successful title defence next year would see the Upbeats win their 10th title, securing what some supporters are already referring to as la Decima.

They celebrated in style, with their own rendition of chants and songs they and more than 38,000 other Addicks had sung at Wembley as Charlton’s first-team clinched promotion.

The programme allows participants to play high-level football in an inclusive environment but also increases the aspirations of Upbeats and their families, strengthening bonds and relationships between them

On 26 June, the Upbeats will be heading to Belfast to take part in the George Best Community Cup. It will be the third time they will participate in the pan-disability tournament run by the Irish FA.