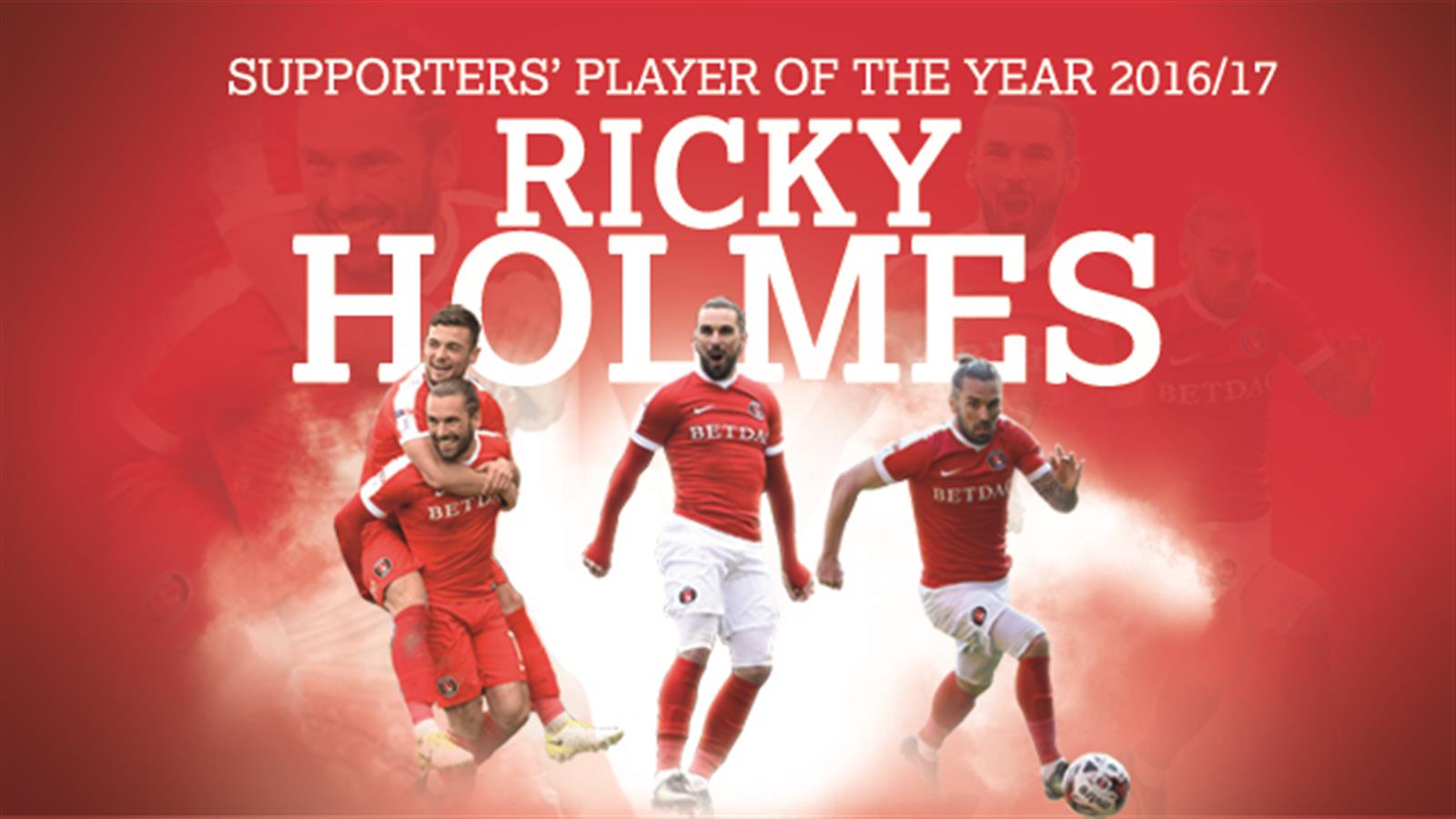 Ricky Holmes has been named as Charlton supporters’ Player of the Year for the 2016/17 season.

The 29-year-old, who joined the Addicks from Northampton Town last summer, has been a standout performer for the majority of the campaign and scooped a hugely-impressive 60 per cent of fans’ votes.

Holmes has contributed six assists this season and netted 12 goals – many of them eye-catching strikes – and that was despite him missing three months through injury.

Holmes becomes the first non-Charlton academy graduate to win the award in six seasons and he says that it is an honour to take the accolade.

“It’s a great achievement for me at such a huge club,” he said. “The season has been a bit negative as a whole because I signed here expecting to get promoted but, on a personal level, to come away with the Player of the Year award from such a good changing room, full of good players, I just want to say thanks to everyone that voted.”

Holmes was recovering from a foot injury when Karl Robinson joined the club in November and, since his return, the Manager says that he has been a model of consistency.

“Ricky was injured for the first 10 weeks of me being here and what I noticed then was what a big character he is around the building. The most important thing for me has been what he has done on the pitch on a Saturday afternoon and Tuesday evening and he has certainly endeared himself to the fans.

“His work ethic is superb and the goals and assists that have come with that are the icing on the cake.”

Ezri Konsa was named as the club’s Young Player of the Year, as voted for by Valley Gold members.

The versatile teenager made his senior debut for the club in August and went on to make almost 40 additional appearances in a variety of positions.

The academy graduate is proud of what he has achieved this season.

He said: “I’m proud and grateful to win this award and I’m really thankful to all of the members of Valley Gold that voted for me.

“It’s been a great season for me, personally. To have broken through early doors and kept on playing - I think I’ve played around 38 more games – it’s a great achievement.”

Manager Robinson has been very impressed by Konsa since he joined the club as says that the youngster has a big future in the game.

He said: “Ezri has played so much football for someone so young and sometimes you can forget how young he is. The physique of the man is incredible and he is a young man with a tremendous future ahead of him.

“Steve Avory has again done an amazing job in producing what, I believe, is one of the best players outside of the Premier League.”

Josh Magennis was named as the Addicks’ Community Player of the Year, due to his contribution and impact on the local area since August.

The Northern Ireland international said: “It’s fantastic to be recognised for some of the stuff that I have done during the season. The link that the club and the Community Trust have with the local community is unbelievable.

“I’ve been down to a few places and obviously we had the Upbeats at the training ground recently. It’s all brilliant work that the Community Trust do and long may it continue.”

Elsewhere, Holmes took the Charlton Athletic Disabled Supporters Association’s Player of the Year prize, while fan Olly Lewis was honoured with the Supporter of the Year award.