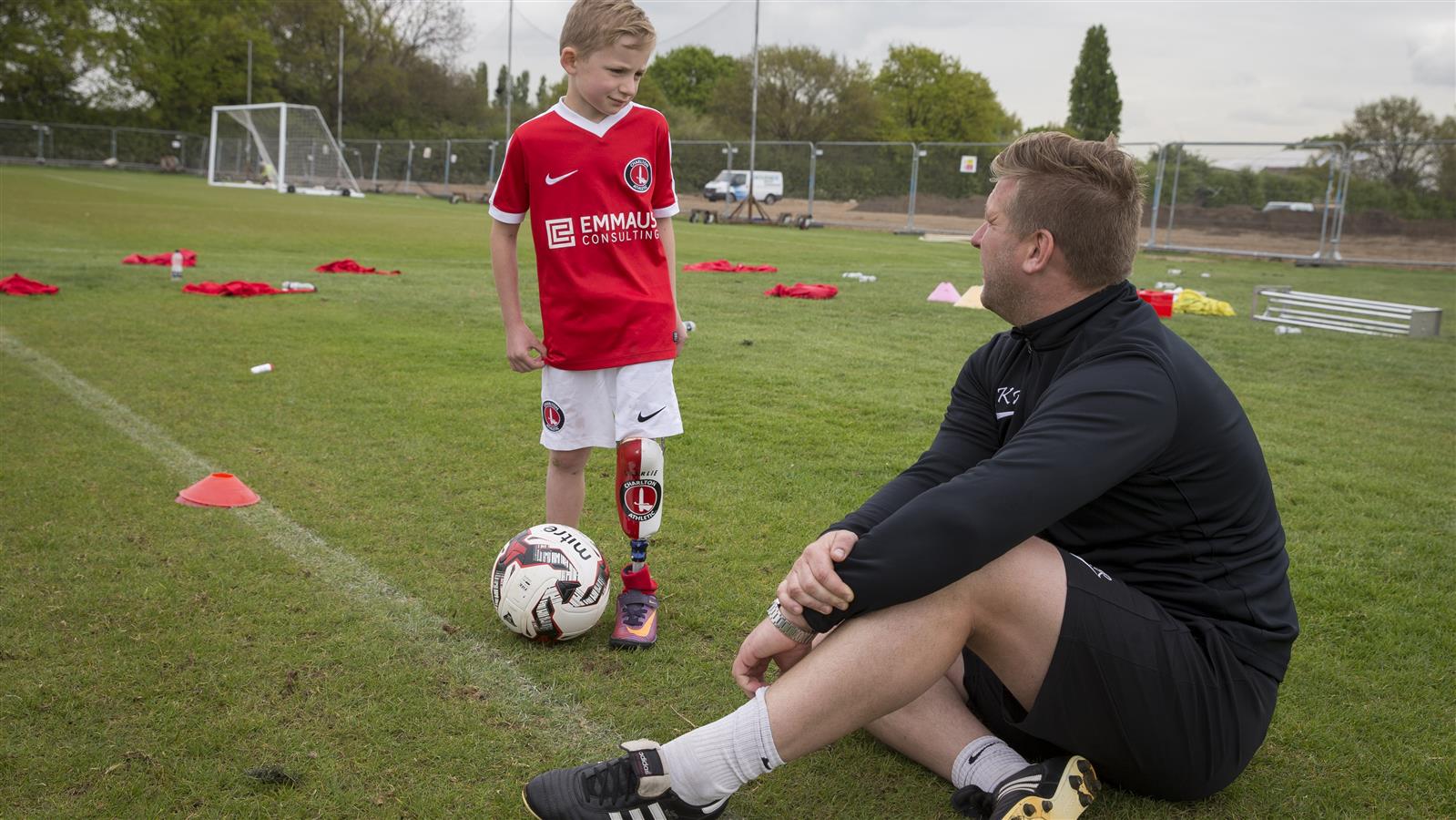 This is seven-year-old Charlie Hewson, a Charlton season ticket holder who loves the club so much he has Charlton’s colours painted on his new prosthetic leg.

Charlie was diagnosed with bone cancer aged just nine months and had to undergo chemotherapy. He had part of his leg amputated and has had a prosthetic leg since then.

He was given the all-clear in December, five years since the end of his treatment. He loves football, especially Charlton. He goes to games with his dad Chris, his uncle Andrew and his granddad Richard.

The youngster, whose favourite player is striker Tony Watt, was invited to train with the Addicks before the team’s game against Chesterfield last weekend.

He got a full tour of Sparrows Lane with his father, his mum Kate and younger sister Martha before meeting the first-team players and joining in with the end of training.

Following his training session with the team, goalkeeper Declan Rudd gave Charlie a pair of his goalkeeping gloves and Watt gave him a pair of his boots.

His dad Chris said: “It’s been great for Charlie. Tony Watt, Ricky Holmes and Chris Solly are his favourites but especially Tony Watt he loves. To get a chance to join in was fantastic; really great.”

His mum Kate added: “He’s absolutely loved it, he’s a child of little words but he’ll be talking about it probably forever.”

Charlie’s leg has been painted red and white and has the Charlton badge on the front of it. It has his surname and his favourite number 7, also worn by Tony Watt, on the back.

His mum explained how his specially designed Charlton leg came about: “He’s had a different type of leg ever since he got his first leg and it’s taken him until now - he wanted a Charlton leg. We’ve got friends of ours who work for McLaren who have done a few of his legs and so they spray painted it for him.”

Charlton Manager Karl Robinson said: “We were so pleased to welcome Charlie to the football club. He’s a great lad and you can see how much he loves his football and this club.”

Charlie’s upper leg was amputated and his lower leg was flipped, making Charlie’s ankle his knee joint, a procedure called rotationplasty. He was one of the first people in the UK to have the operation.

His dad explained how it came about: “When Charlie was nine months old, Kate noticed his leg was swollen and we weren’t really sure what it was. After a lot of testing it transpired it was bone cancer, so we spent the majority of the year in Great Ormond Street with him having treatment.

He had a lot of hardcore, heavy chemotherapy which was pretty tough for him but he was a baby so he doesn’t have any mental scares from it but it was a tough year from him.”

Charlie now plays football after school and for a local club. Karl Robinson added: “He certainly brought a smile to everyone’s face at Sparrows Lane.”