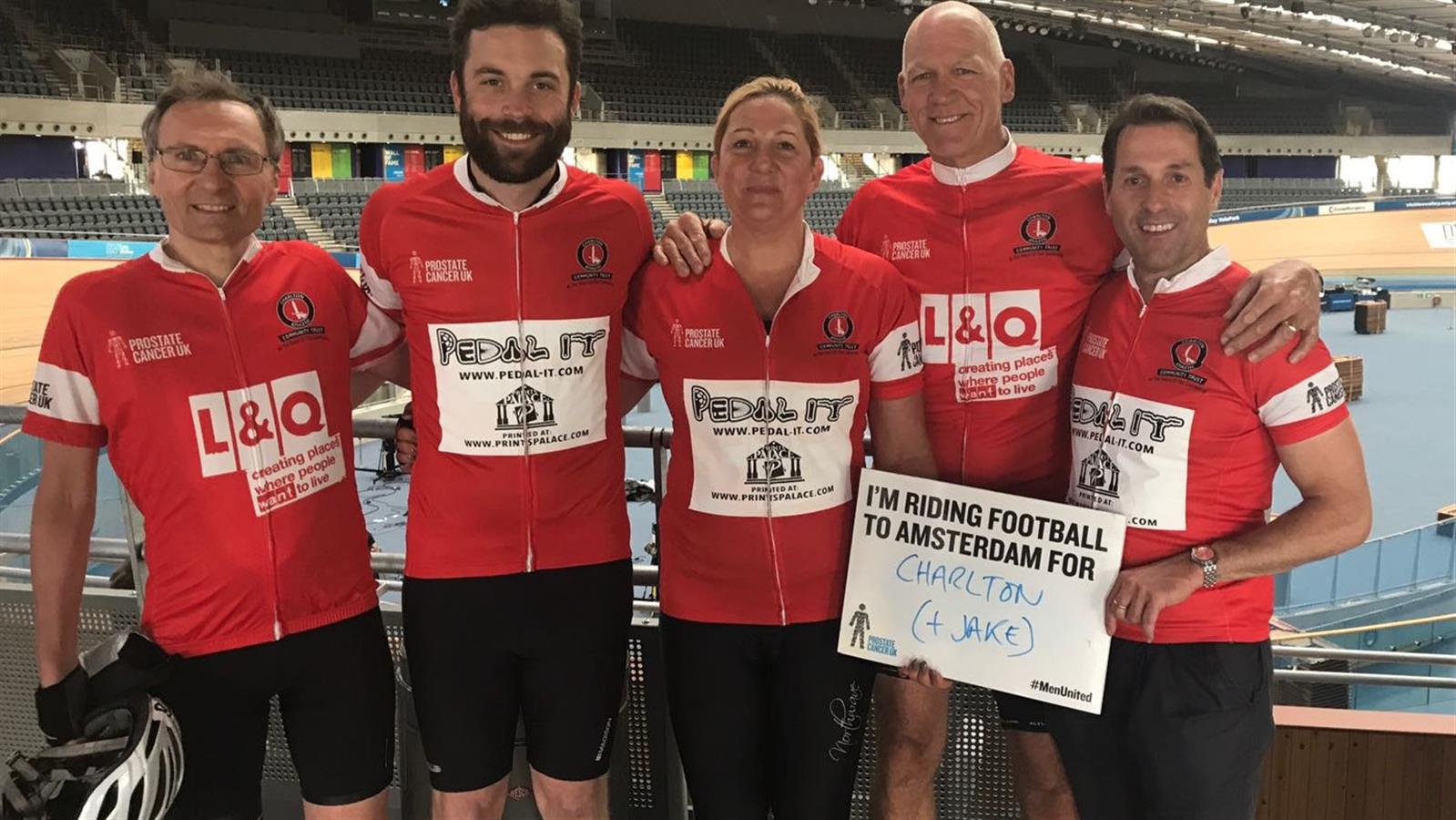 The Charlton family came together last weekend to cycle 145 miles from London to Amsterdam in aid of Prostate Cancer UK, the official charity partners of the English Football League.

The valiant Charlton team included staff from the club and Community Trust.

Starting on Friday morning at the Queen Elizabeth Olympic Park’s Lee Valley VeloPark, the team cycled through Essex to Harwich where they boarded the ferry to the Netherlands.

Saturday was spent cycling from the Hook of Holland to the Amsterdam Arena, home of AFC Ajax.

Fundraising is now on target to reach a massive £500,000 this year.

Speaking after the event, club legend Bob Bolder said: “The sun, was shining, the atmosphere was great and we raised lots of money and awareness.

“This is now the 3rd year I’ve cycled for Prostate Cancer UK and I’m really amazed at how these events continue to unite the wider football community for a great cause. I’m look forward to coming back with a bigger Charlton contingent again next year.”

The cause was particularly close to Tracey Leaburn’s heart, with her father having passed away from the disease. Speaking after the event Tracey said:

“In the UK 1 in 8 white men and 1 in 4 black men will get prostate cancer at some point in their lives. As my father had this disease, my brother is two and a half times more likely to get it so I don’t want it to affect my family again.

“All the hard work on the bike ride was well worth it. I’m feeling healthier myself and I had a great time over the weekend. It’s fantastic that Prostate Cancer UK are putting together such positive events to fund better diagnosis, treatment and prevention.”

James Beeby, Director of Fundraising at Prostate Cancer UK, said: “We are proud to be Official Charity Partner of the EFL, and clubs from across the football family have consistently shown a brilliant demonstration of what we call Men United: people joining one team to fight a common opposition – prostate cancer.

“One man every hour dies from prostate cancer; it’s the most common cancer in men. But we want to make prostate cancer a disease that the next generation of men do not fear. We thank all the riders for joining the fight.”

The Charlton Football to Amsterdam team has raised £4,562 so far for Prostate Cancer UK so far. The money has been raised through individual donations, a sponsored pitch hire at The Valley last month and an event organised by Bob Bolder at Deal Town F.C.

The team also received support from Chris Powell, Garth Crooks and Linford Christie, as well as sponsorship from Pedal It bike shop in Lewisham.

Their total will be added to the £888.73 raised by generous fans at Charlton’s home game against Bradford City last February.

Donations are still being taken and you can make a contribution to the Charlton team here >> https://www.justgiving.com/companyteams/charltonathletic-pcuk