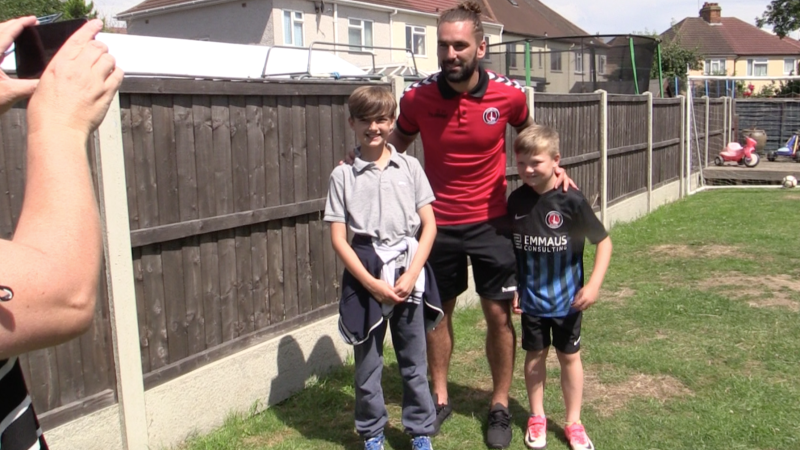 Player of the Year Ricky Holmes was out and about last week when he delivered season ticket boxes to two families of Charlton supporters.

The Cowie family were the first to get a surprise visit from the winger. Seven-year-old Connor Cowie is a huge Addick, with Ricky Holmes being his favourite player and Connor, his brother Rhys and mum Angie were all given a big shock when he knocked on their front door.

Holmes took time to have a kick-about with the children in the garden before posing for photos and he believes that the upcoming season is going to be an exciting one.

“It was really nice to get out and give some of our fans a surprise and I think it’s going to be different this season,” Holmes said.

The next stop for Holmes was the Jaggs’ family home. Husband and wife Robert and Maureen have been following Charlton for decades and are two of seven family members that sit in the North Upper at The Valley.

After posing for photos with the long-serving Addicks fans, Holmes sat down for a chat with the pair, signed their grandson’s football boots and was also shown a number of Charlton newspaper cutting that Maureen had found.

2017/18 marks 25 years since Charlton returned to The Valley in December 1992 and as a result all season ticket holders will receive a commemorative box.

As well as containing season tickets themselves, the boxes also come with a free, anniversary scarf and an August-to-July calendar, which lists all of the Addicks’ 2017/18 fixtures.

The calendar also contains our new events calendar on its inside cover, with it providing details of all our home, themed matchdays, such as Red, White and Black Day and Upbeats Day.