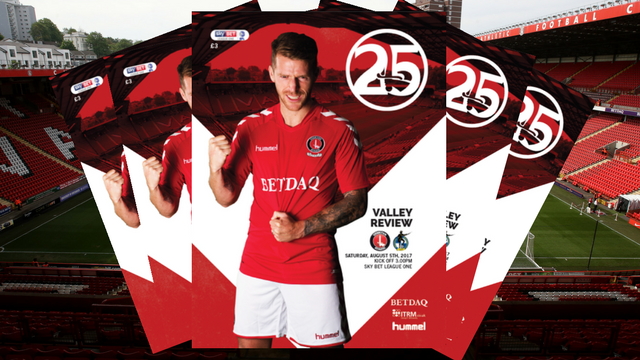 Valley Review is back for 2017/18 with Billy Clarke starring as the main attraction for the visit of Bristol Rovers on opening day.

The summer arrival features as the main interview in which he discusses his move to SE7, a tough pre-season campaign and his mission to finally win promotion from League One after play-off disappointment with Bradford City in the last two seasons.

Clarke is also the first to face ‘100 to One’, in which he picks 10 random numbers between one and 100 which correspond to different questions which reveal a bit more about himself.

The official matchday programme, which carries a brand new design for the new season, also sees Karl Robinson pen his first set of Manager’s notes for the season while there are a couple of new features which celebrates the club’s 25-year anniversary of the return to The Valley.

Throughout the season, Valley Review will remember the best moments to have taken place in SE7 over the past 25 years, while Valley Heroes will take a look at the best Charlton players to grace the turf since the return in 1992.

All the latest news is rounded up, including news from the Charlton Women’s team, and there is a pullout poster of Clarke inside.

Valley Review is available to purchase from in and around the ground, as well as in the Valley Superstore, and supporters will be pleased to learn that there will be a vast increase in sellers, making it easier to pick up your copy of the matchday programme.