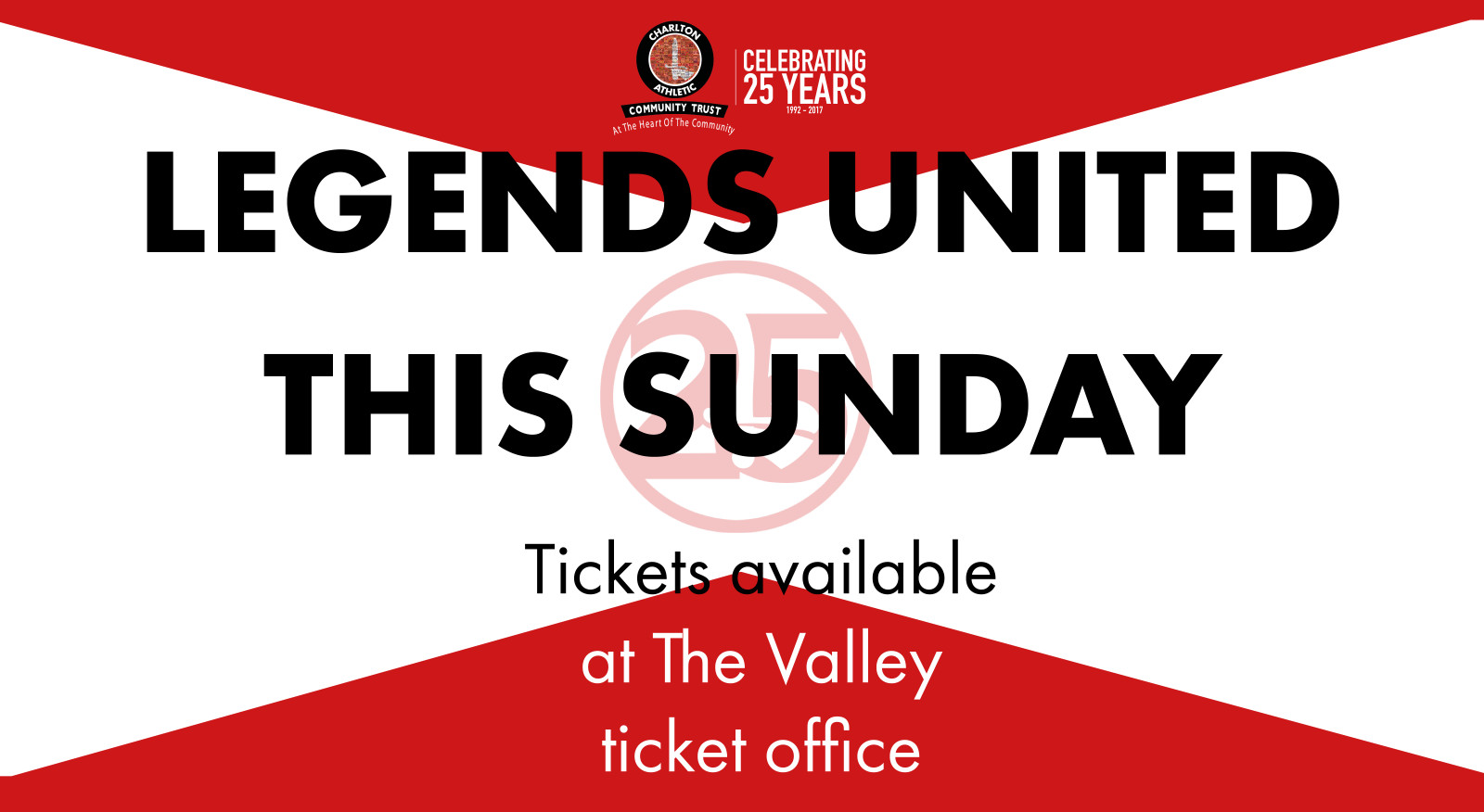 Two teams of former Addicks face each other on Sunday to celebrate 25 years since the club’s return to The Valley and the launch of the community programme at Charlton Athletic.

The Legends United match is a unique event, with stars from Charlton teams throughout the last 25 years reuniting to raise money for Charlton Athletic Community Trust (CACT).

Managed by Keith Peacock and Charlton supporting radio host Dave Berry, the two teams will be captained by Alan Curbishley and Steve Gritt, both teams have been busy preparing for the game over the last few weeks.

Peacock and Johnnie Jackson led a recent training session attended by Jason Euell and Lee Bowyer as the pair did some shooting practice ahead of their return to the pitch.

The ticket office will be open from 10am, and, with a large walk-up anticipated, those buying on the day are advised to get there as early as possible.

Tickets are also available to buy online , with the option to print off tickets at home available.

All proceeds from tickets and programmes will go to CACT to support their work in the heart of the community.

Unfortunately Carl Leaburn, Robert Lee, Scott Minto, John Bumstead, Mickey Bennett and Eddie Youds are ruled out of the game, but all six will still be there on the day to support their former teammates.

Peacock and Dave Berry have no other injury concerns, but remain worried about some players’ ability to last 90 minutes.

Peacock says Simon Webster could prove invaluable on the day “because he can do more than one job: he’s also a qualified physio.

“It could be very important to have a centre-half that can look after the others and give massages”, he added.

With some of the players getting on for 60, Webster could have his work cut out. But a batch of younger former Addicks will also be there to provide energy off the bench.

These include Grant Basey, Osei Sankofa, Jamie Stuart, Paul Linger and Johnnie Jackson, who will also serve as Peacock’s Assistant Manager. Basey was the first player to make it into Charlton’s first team via one of CACT’s community courses, which he and Sankofa have since gone on to coach on.

Videos of Keith Peacock and Dave Berry discussing which players will feature for each team are available here.

The sides have never met, but several of those taking part on Sunday have played against or alongside each other over the years.

Steve Gritt against Alan Curbishley in the middle of the park is one of the key clashes to look out for.

Keith and Dave are keeping their squads a closely kept secret until Sunday. The teams will exclusively published in the special souvenir programme (£2), however there may be some changes up to the 12 noon deadline on Sunday.

The man in the middle is Wally James, a cab driver who referees in Academy games at Sparrows Lane and likes to talk for England.

Beth Archer and Jordan Crichlow, both promising young officials, will be running the line. Archer is Steve Gritt’s niece.

Jeff Pettitt, the self-proclaimed old boy of the officials, who coaches referees at the Academy, will be the fourth official.

The club and CACT Twitter accounts will both be posting live updates throughout the game and announcing the starting line-ups at midday on Sunday, an hour before kick-off.

Valley Pass will be providing audio commentary to subscribers who cannot make the game, with a donation to CACT requested via www.cact.org.uk/donate