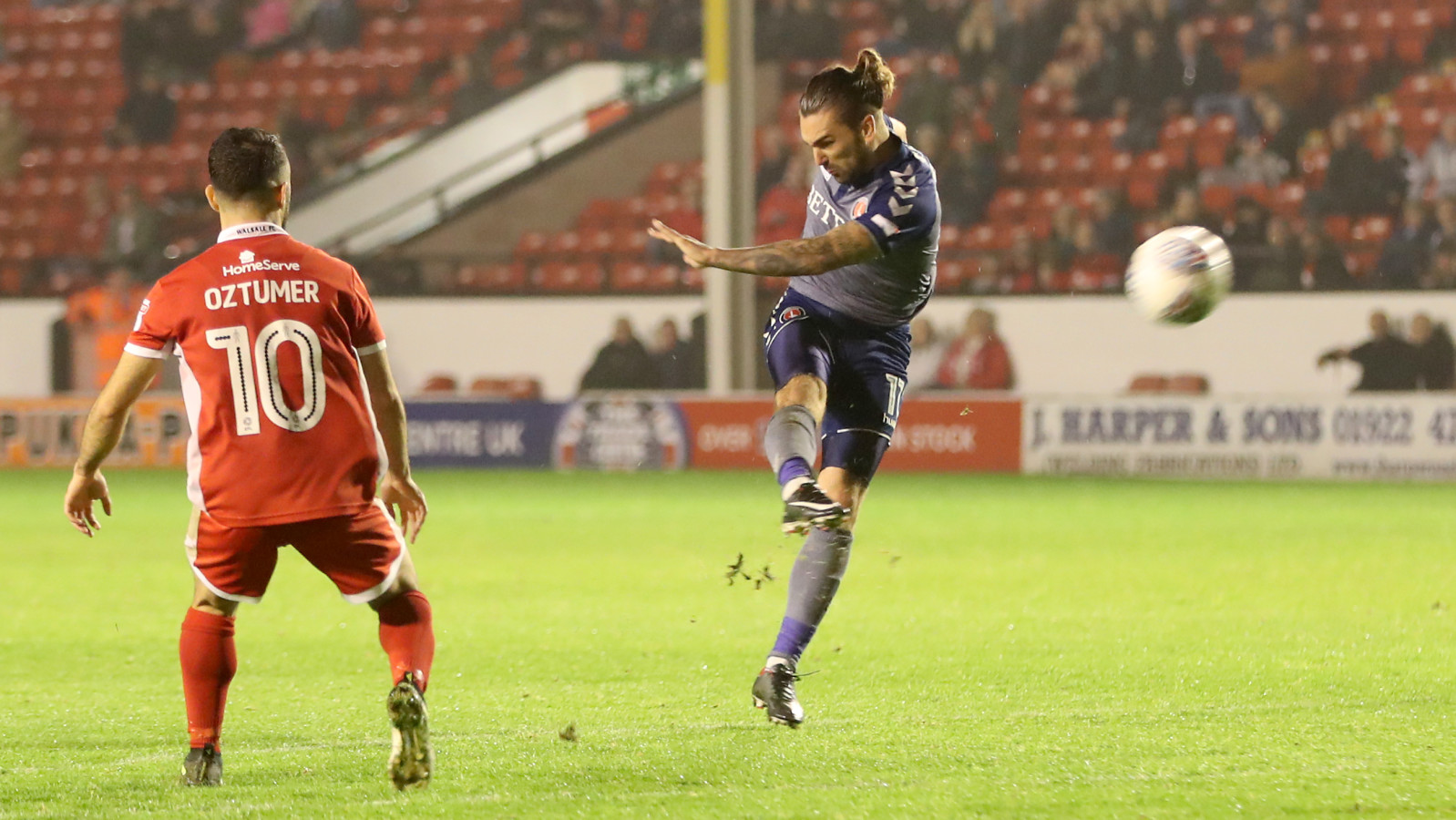 Charlton were made to settle for a point at Walsall on Tuesday evening, with a late goals for both side ensuring a 2-2 draw at the Banks’s Stadium.

The Addicks dominated the first half and went ahead through Tariqe Fosu’s strike, only to be pegged back by Tyler Roberts’ equaliser before half-time.

And after a quieter second period, the game sprung into life in the 88th minute when Ricky Holmes volleyed home what he thought would be the winner.

Walsall, however, had other ideas and scored a stunning goal of their own seconds later to leave the visitors frustrated in the Midlands.

Karl Robinson was able to re-introduce Holmes into his starting XI after the winger had served his one-match ban at the weekend as the Addicks made two changes against the Saddlers.

Holmes replaced Karlan Ahearne-Grant who dropped to the bench, while Robinson was forced to make a change at the centre of defence with Jason Pearce missing through injury, replaced by Ezri Konsa who was making his first league start of the season.

The hosts were the first to fire a warning shot when Zeli Ismail sent a well-hit drive whistling past the post from 22 yards in the fifth minute, but it was the Addicks who had the ball in the net with their first effort on goal with 13 minutes on the clock.

It came from a smart ball over the top from Jake Forster-Caskey which unlocked the Walsall defence to send Fosu clear with just the goalkeeper to beat. The Charlton man took a touch, kept his cool and finished through the legs of Mark Gillespie to put the Londoners one up.

The goal triggered a bright spell with the Addicks coming close on two occasions soon after. First, Billy Clarke drew Gillespie into a smart, low save with a powerful effort from distance, before the keeper made an even better stop to tip Josh Magennis’ header onto the right-hand post.

Holmes was next to come close when he was sent through by Fosu, but he could only skew his shot wide from a good position, while Patrick Bauer saw a header smothered on the line from a corner.

The returning Holmes had a sight at goal from a free-kick just outside the box on the half-hour mark, but curled his effort just over the bar and Ahmed Kashi fired a shot wide from 20 yards with the visitors well on top.

But four minutes before the break, the home side found a leveller against the run of play through Roberts, who directed a right-wing cross past Ben Amos at the near post to ensure both sides would be heading into the break on level terms.

Erhun Oztumer dipped a good-looking free-kick over the bar early in the second half for Walsall, who came out strongly after the restart, although Holmes very nearly capitalised on a weak back-pass at the other end, but was beaten to it by the on-rushing Gillespie who prevented what would have been an almost-certain goal.

Charlton should probably have been punished on 68 minutes when Jon Guthrie was found unmarked from a free-kick at the back post but, thankfully, the defender could not connect with his header despite having all the time in the world to do so.

Moments later, Amos did superbly well to keep out Roberts’ drive before pouncing on the ball to deny a follow up and, from that, the Addicks broke down the other end to come close themselves with Magennis crossing for Fosu in the box, who saw a shot well blocked.

With 15 minutes remaining, Konsa sent a shot just off the target when a free-kick delivery fell to him 12 yards out but, unlike the first half, chances had been few and far between.

However, with two minutes remaining, it looked as if Charlton had sewn up victory. With the visitors getting the ball in the box, the ball was cleared to the edge, but only as far as Holmes who fired in an unstoppable volley which dipped over Gillespie and into the back of the net.

But in agonising fashion, the joy would be short lived as the home side would go straight down the other end and score an even better goal less than a minute later.

Substitute Agyei was the man to break the Londoners’ hearts, curling an unstoppable effort into the top left-hand corner from 25 yards to round off a dramatic 60 seconds and ensure a share of the points.