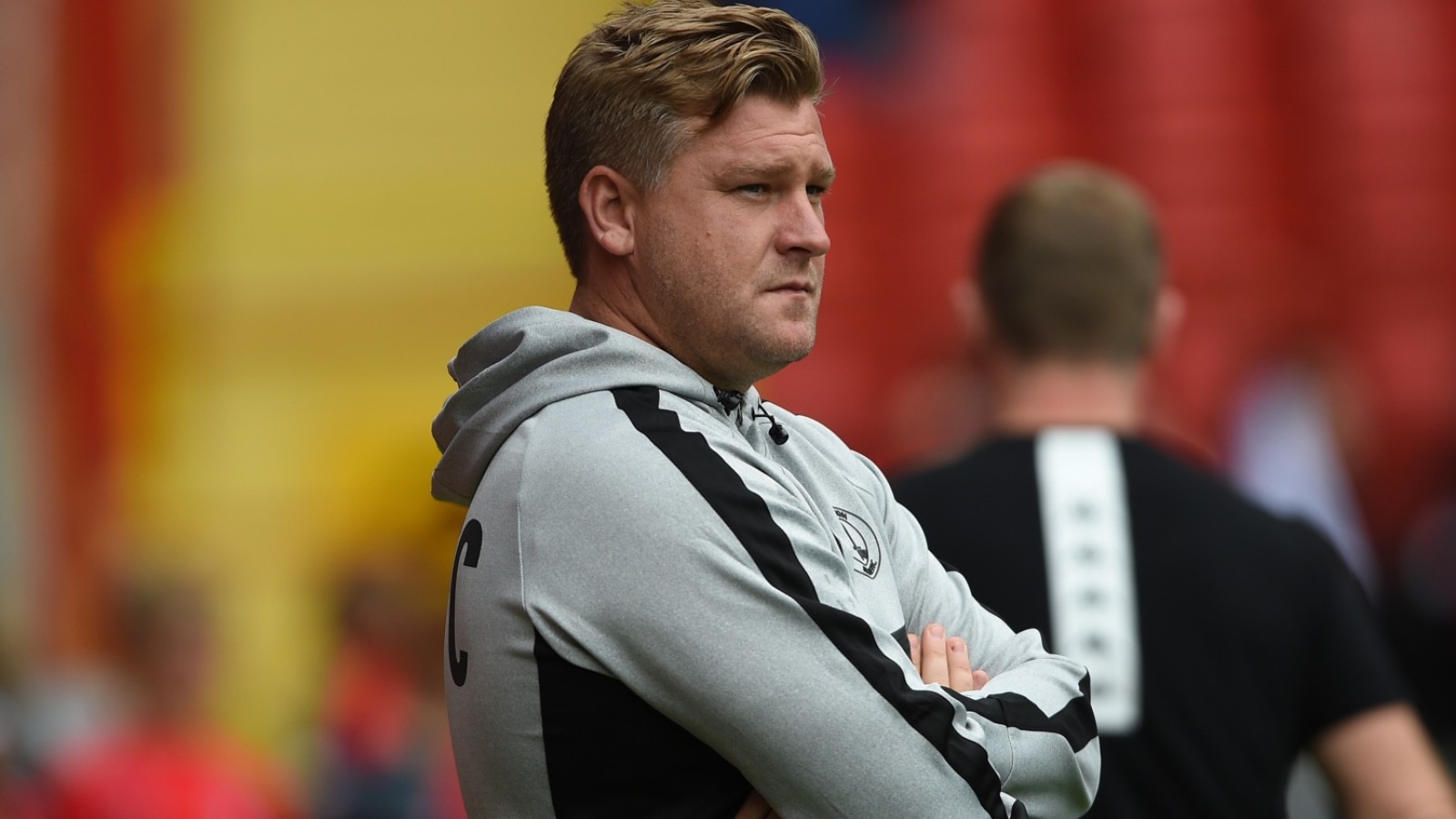 Karl Robinson sat down with the local media on Thursday afternoon to preview Charlton’s trip to Fleetwood Town.

The Addicks were frustrated at Walsall on Tuesday night, drawing 2-2, and ahead of Saturday’s fixture the Manager was asked about Fleetwood, the first 10 games of the season, Ben Reeves and Mark Marshall, Ezri Konsa and Jason Pearce and the club’s other injured players.

“I like them. I’ve watched their last three games – ok, they lost at home against Southend but the way they played in the first half against Bradford on Tuesday was sensational.

“They’re a very good team and they have got plenty of pace and energy and some very talented individual players. They can drop to a back five, have got three in midfield with a lot of energy and up front they have got people that can influence games.

“They have got goals all over the pitch, it is a difficult place to go and play but we are going to prepare are detailed as we possibly can.”

Summer signings in the squad for Saturday

“They’re not fully fit. There is 15 minutes and 25 minutes in them but my thinking behind it is that they could have stayed behind and done some conditioning work but they will both play 50 minutes on Tuesday afternoon in a behind-closed-doors game against Ipswich.

“There are one or two things that are coming up and, with the Peterborough game now off, we have got a window of opportunity. I want them to be part of the team before that.

“When our top players look over to the bench and they see Mark Marshall and Ben Reeves ready to come on, that is an injection of real quality. The opposition manager will know who they are.

“We know that Been Reeves is as good as it gets and that Mark Marshall is one of the best wingers in this league. Them coming on for the last 15-20 minutes will be extremely difficult for the opposition. That is what we are extremely looking forward to.”

“I think everyone looks at the first 10 games as the first indicator. Congratulations to the teams at the top, they have started very well.

“The teams at the bottom will now want to climb out immediately, the ones in the middle will want to jump a bit higher or stay away from the bottom.

“We are in a position where we feel like we can push on with Mark Marshall and Ben Reeves coming back. There are one or two things that we feel we can strengthen ourselves in.

“I am very proud of our players and I can’t question the effort that they have put in so far this season. Results aren’t always what we want, because they’re never going to be perfect, but we started the season brilliantly and we feel a bit frustrated that we haven’t got more points than what we do have.

“I’m happy with the first 10 games but I could definitely be happier, that is for sure.”

Progress for Page and Lennon

“Pagey will be playing a game this week, hopefully. He trained fully on Tuesday. The difference between him and the other injured players is that he has been out for longer, so he’ll need more games behind closed doors.

“Harry Lennon is now running on a treadmill with an incline, which is great for him. Hopefully we’ll have him back on the grass soon as well.”

Konsa to step in for the injured Pearce

“Pearcey is a big blow to us. He is a leader, a motivator and is great in the dressing room, so he is a big loss.

“It’s a similar injury to Mark Marshall’s but not quite as serious. It’s a 10-week injury and we’d like to think that Pearcey will be back for the Christmas period, 100 per cent.

“I’m not one to go back in time, though, it is always about what the future can bring and now this is Ez’s chance to show us what he is made of.

“He is one of the best central defenders outside of the top flight. One of the reasons he hasn’t been playing is because he is still learning. Everyone in this building knows that one day he will get to the pinnacle of our game.

“We turned down bids in the summer, we knew that he would be an important person in helping us to achieve what we want to achieve and we knew that there was more development and growth in him too.

“He didn’t play at the start of the season but now his chance has arisen and hopefully he takes it.”