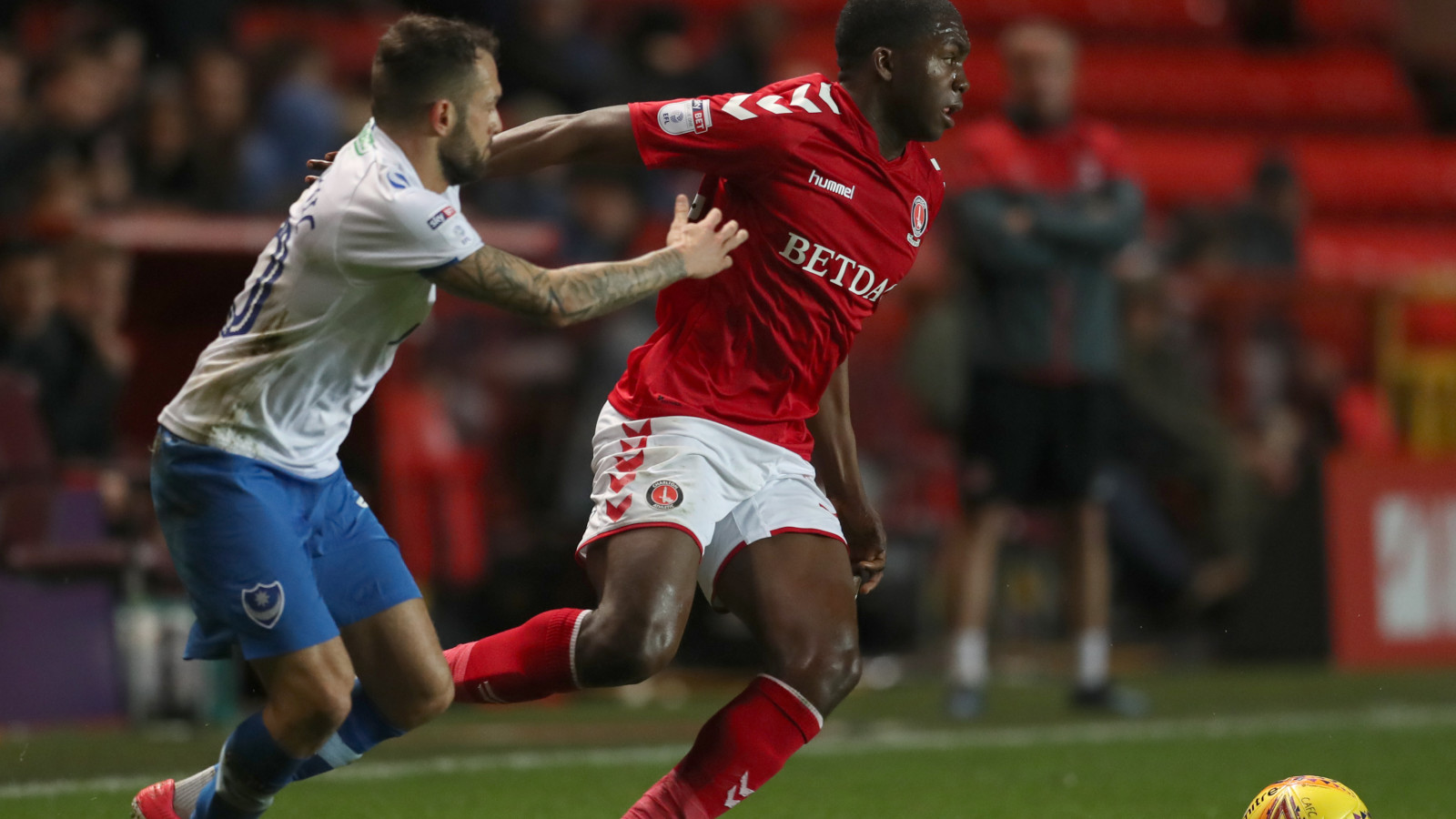 Charlton missed the chance to top Group A in the Southern section of the Checkatrade Trophy as Portsmouth claimed a 1-0 win at The Valley on Tuesday evening.

The Addicks knew a win or a draw would be enough for them to top the group and a guaranteed home tie in the next round, but a first-half strike from Curtis Main was enough for Pompey to claim all three points and finish as group winners.

Karl Robinson made nine changes to the side that beat Truro 3-1 in the FA Cup on Sunday, with Joe Dodoo and Naby Sarr the only two to retain their places.

Sunday’s goalscorers Ben Reeves and Mark Marshall dropped to a bench that included Ricky Holmes and Jake Forster-Caskey as well.

That strength almost told less than 60 seconds into the contest as Ahearne-Grant narrowly poked a teasing cross from Fosu wide at the back post. Kashi then had a shot from 20 yards, but it was straight down the throat of Portsmouth goalkeeper Luke McGee.

The Addicks were in control and were playing some slick, passing football. They were dealt a blow when Fosu was forced off through injury just eight minutes in, with Reeves replacing him.

Joe Dodoo had a series of half chances to score. Firstly, Billy Clarke played a nice through ball that just evaded the striker, before the on-loan Rangers man chased down a clearance, only to see McGee playing sweeper to clear the danger. Clarke then saw an effort blocked wide for a corner.

Portsmouth grew into the game, however, and Oliver Hawkins saw a back-post header well held by Dillon Phillips. That was a warning sign as the away side took the lead after 20 minutes.

Charlton failed to push up properly following a cross from Milan Lalkovic and it was hooked back into the anger area at the back post, where Curtis Main was left alone to tap home.

Robinson’s men pushed for an equaliser but they were luckless. Clarke played in a lovely ball on the left-hand side, but Hawkins blocked and it wouldn’t drop for Dodoo, who was waiting to pounce.

The striker then saw an effort well held after he had trapped a ball outside the area, before holding off two defenders and getting a shot off.

McGee almost gifted the Addicks an equaliser after Patrick Bauer headed an Ahearne-Grant cross back across goal which hit Adam May before the goalkeeper caught it - only to drop it under his body, but after the confusion he grabbed it as the away side took a lead into half-time.

Into the second-half, Nabby Sarr intercepted a high ball in his own half well before driving deep into the Pompey half and sliding Clarke in down the right. The midfielder latched onto it and cut back inside, but could only fire straight at McGee.

Jamal Lowe then forced Phillips into a save as the ‘keeper dived down to his bottom left-hand corner to deny the substitute.

The Addicks then had a good spell of pressure, as they knocked the ball around well, ending with a towering header at the back post from Dijksteel, but the defender could only guide it over the bar.

Good link-up play between substitute Ricky Holmes and Hackett-Fairchild almost produced a chance, but the latter’s cross into the anger are was hooked clear with Holmes waiting to pounce.

Holmes then had a crashing shot deflected wide for a corner as Charlton pushed for a way back into the game. And after that the midfielder found himself free in the box, but he dragged his effort well wide.

Sarr had the best chance to get Charlton back on level terms late on. Holmes raced away on the left-hand side and delivered a teasing cross back across the face of the goal, but on the stretch the defender could only steer over.

Charlton huffed and puffed for an equaliser, but it never materialised. The Addicks finish second in the group with six points and will face an away tie in the next round, which takes place in December.