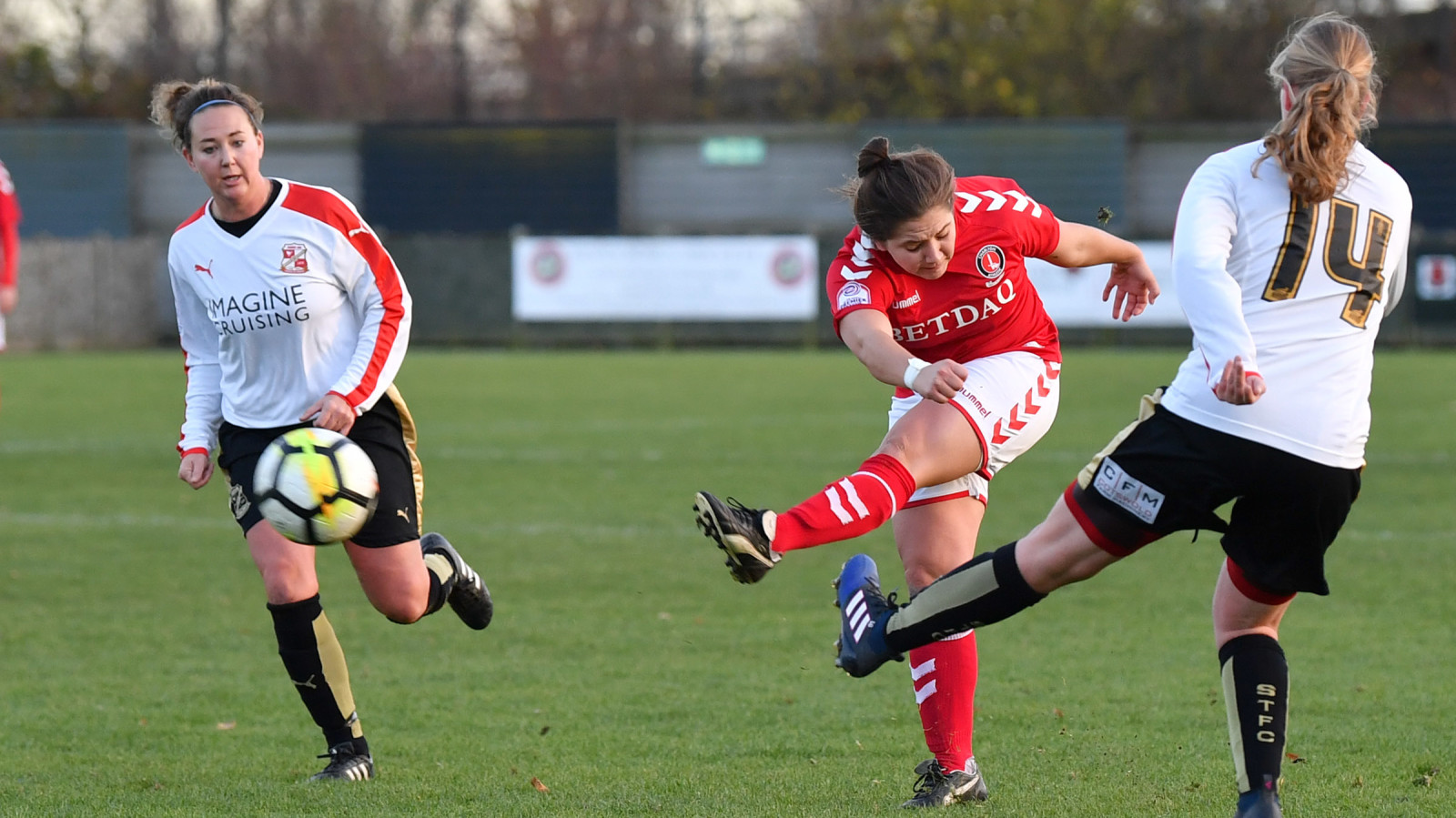 The Charlton women’s team thrashed Swindon Town 11-0 for the second time this season at Sporting Club Thamesmead on Sunday, stretching their lead at the top of the FA Women’s Premier League South to five points.

Four goals from Charlotte Gurr and a hat-trick from Kit Graham added to a Charlotte Lee brace and one each from Hannah Churchill and Grace Coombs and the victory means the women’s team will go into the Christmas break top of the pile.

And it could have been more, with the woodwork and assistant referee’s offside flag denying the Addicks on numerous occasions as they looked to improve what could be an all-important goal difference come the end of the season.

Charlton were on the front foot from the off and Swindon keeper Emily Bagguely made an excellent stop to deny Gurr early on, while skipper Kim Dixson also flashed a shot wide in the opening exchanges.

They got their just rewards 10 minutes in when Graham latched onto a wonderful through ball from Gurr and fired home into the far corner.

Graham should have doubled her side’s lead just moments later when she headed a Churchill cross narrowly wide. But her second wasn’t long in coming and, when the visitors’ defence failed to deal with a Hope Nash centre, Graham was on hand to slam home.

That was the opening salvo in what would see the hosts bag four goals in the space of just six minutes to put the game beyond any doubt. A minute later it was three when, again, Swindon struggled to clear a cross, this time from Churchill, and Lee finished.

Graham then turned provider, setting up goals for both Gurr and Churchill for the fourth and fifth.

Charley Clifford was extremely unlucky not to get on the scoresheet with one of two 30-yarders. The first was, just about, dealt with by Bagguely; the second thundered against the crossbar. Graham was on hand to head the rebound home, only to see it ruled out for offside.

Some excellent football saw Clifford, Lee and Graham combine 10 minutes before the interval to set Gurr up to fire home from 20 yards out.

Having been denied once by a crucial block, centre-back Coombs got in on the action shortly before half time, poking home a Dixson cross and Gurr then bagged her treble to give her side an eight-goal lead going into the break.

The second half was hardly a quieter affair, despite being lighter on goals. Two minutes in the rout continued when Gurr stabbed home from close-range.

Clifford was bound not to get on the scoresheet today despite sliding home on 51 minutes; her goal was flagged offside. Five minutes later, though, it was 10. Swindon looked set to make a sub but Bagguely decided to take a quick free kick and passed straight to Nash. The winger in turn fed Lee, who made no mistake one-on-one.

Graham had to wait longer than she should have for her hat-trick. She stung the post twice in quick succession, saw Bagguely save a couple and had one header cleared off the line. But she wasn’t going to be denied and had the final say with five minutes left, turning home a Lee cross.

Sub Georgia Griffin had a late goal ruled out and Graham hit the crossbar yet again in the dying stages, but Charlton came out easy winners and go into the next two weeks’ cup matches knowing they will start 2018 as league leaders.

Highlights from the match can be watched here