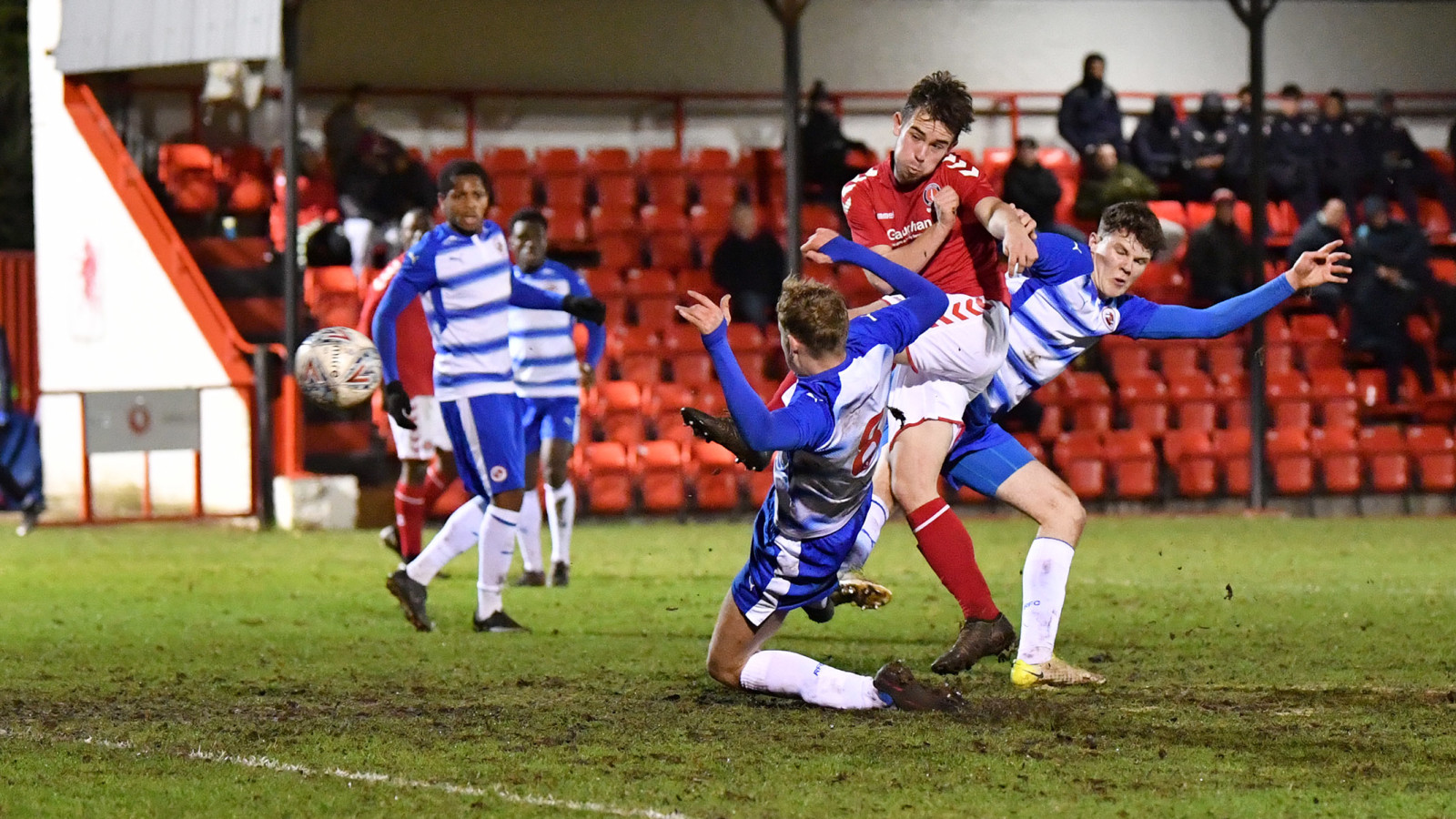 Thanks to strikes from Albie Morgan, Sam Nwosu and Alex Willis, the young Addicks led the Royals by a single goal deep into stoppage time, only for the Category One side to draw level in the final seconds.

Charlton were reduced to 10 men before extra-time got underway, after Dan Birch was sent off, and in the additional period England youth international Daniel Loader bagged Reading’s winner.

The Addicks – who also lost Ben Dempsey to a serious-looking leg injury - had to play the second period of extra-time with nine men and gave it their all in the minutes that remained and came so close to forcing penalties when Brendan Sarpong-Wiredu headed against the crossbar.

Reading would also end with nine players, following late red cards for Loader and defender Tom Holmes, but they clung on to book their place in round five.

The first shot of the game came in from the Royals’ Loader on four minutes, but Ed Harvey was equal to it.

Shortly afterwards, Loader sliced over the bar from 10 yards, having latched onto a long ball forward, and Brendan Sarpong-Wiredu then nodded wide from a dangerous Morgan corner for the Addicks.

Charlton grabbed the lead on 16 minutes. Sarpong-Wiredu did superbly to latch onto a loose ball before threading Jordan Zemura through on goal. He was hauled down inside the box by Jamal Balogun and Morgan stepped up to smash the penalty into the back of the net.

Zemura fired a strike into the side netting as the Addicks quickly looked for a second and Jeremy Sarmiento was then denied by a brave save from Adam Desbois, following a low cross from Alfie Doughty.

Nwosu poked an effort over the bar as the Addicks continued to probe and, at the other end, Reading’s Jordan Holsgrove was denied by the legs of Addicks stopper Harvey.

Holsgrove would equalise before half-time, though, when he drove into the box and picked out the bottom corner with a powerful drive.

A brilliant save from Reading’s Desbois kept out Willis’ powerful header 10 minutes after the break but from the corner that followed the Addicks would regain their advantage.

Doughty sent the in-swinger into the box and Nwosu met it with a perfect glancing header that Reading’s Ethan Coleman was unable to clear from underneath his own crossbar.

Desbois pushed a curling Morgan free-kick around the post on 63 minutes but, again from the corner that would follow, Charlton would score again.

The Royals failed to properly clear Morgan’s delivery and the ball fell for Willis, who spun and hooked into the net to notch the 500th Charlton goal he has scored at all levels since joining the club as an U8.

The lead gave the Addicks a bit of breathing space but the deficit was halved within four minutes. Holsgrove crossed in a free-kick from the left and Samuel Faniyan nodded home for the Berkshire boys.

Dempsey thumped the base of the post 10 minutes from time, following some fantastic link-up play with Morgan and, for the Royals, Holsgrove stung the palms of Harvey with a 20-yard shot.

Four minutes of stoppage time were indicated and with virtually the last kick of the match the Royals levelled. Some great wing-play on the right saw the ball make its way to Holsgrove in the middle and he steered the ball home.

It would get worse for Charlton before extra-time began as, on the blast of the full-time whistle, Dan Birch was sent off for a second bookable offence following a late tackle.

Reading made the most of their numerical advantage in the 98th minute. Loader skipped away from a couple of tired Charlton challenges before firing the ball across Harvey and into the net via the post.

The Addicks lost Dempsey to a serious injury just as the whistle blew for half-time in extra-time when he was caught by a rash challenge from goalscorer Loader, which meant Charlton had to negotiate the final 15 minutes with only nine men.

But they came agonisingly close to drawing level. Morgan sent in a free-kick from the right and Sarpong-Wiredu bulleted a header against the bar.

The Royals would hang on to progress but they too would end the game with nine men, with Loader and Holmes both picking up second yellow cards in the final few minutes.

The young Addicks can be proud of their performance but, until next season, their involvement in the FA Youth Cup has come to an end.