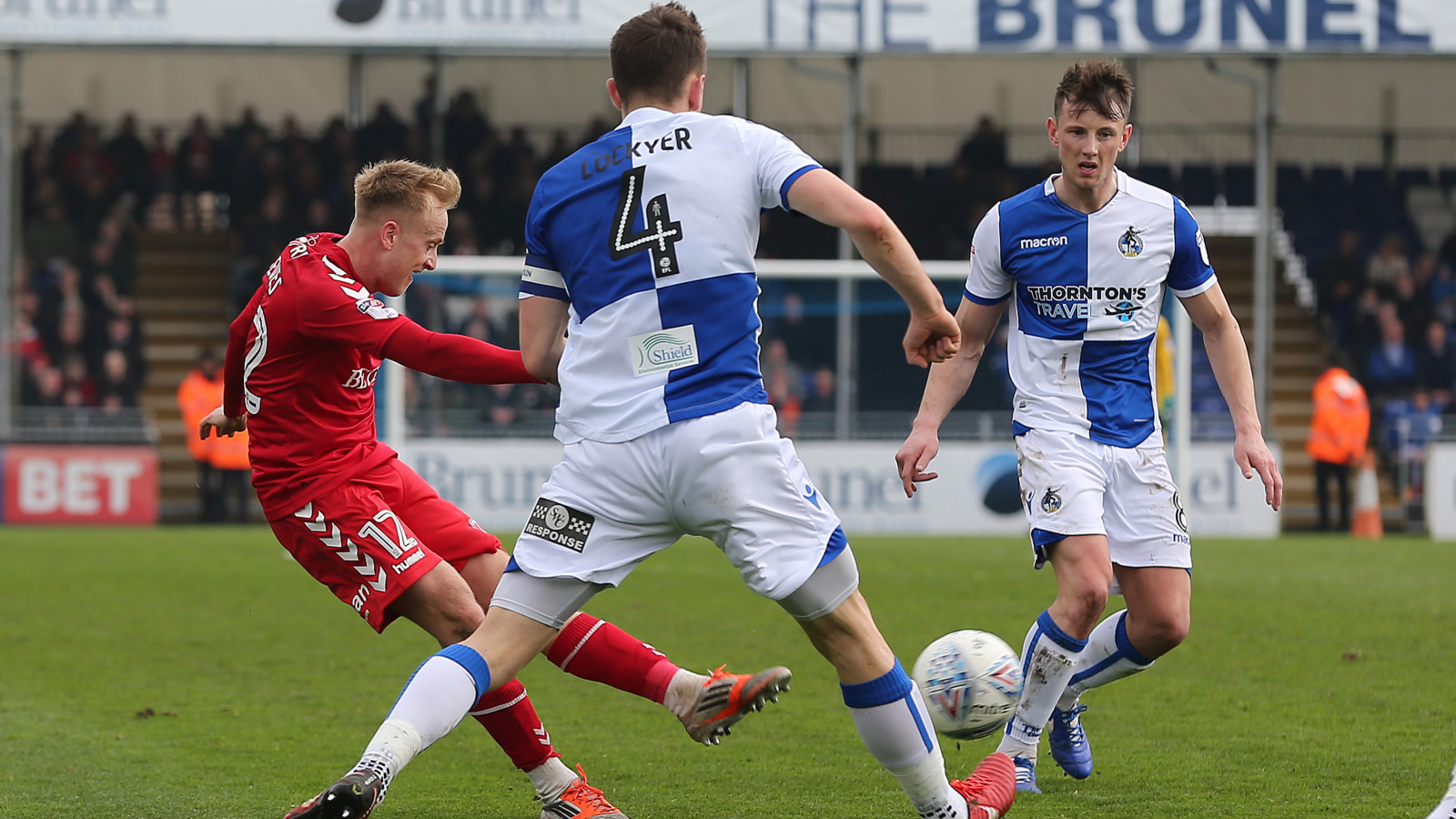 Trailing to Kyle Bennett’s 21st-minute opener, the Northern Ireland international picked out the bottom corner on the stroke of half-time to draw his team level.

After the break, Joe Aribo and Jason Pearce both saw shots cleared off the line but Lee Bowyer’s men were unable to find a winner in the hard-fought contest.

The result means that the Addicks remain sixth in the Sky Bet League One table with six matches of the campaign remaining.

In terms of team news, Lee Bowyer made three changes to the XI that started Monday’s victory against Rotherham United at The Valley.

Lewis Page and Anfernee Dijksteel added a freshness to the full-back positions, replacing Jay Dasilva and Ezri Konsa, and there was also a start for Sullay Kaikai, who came in for the injured Tariqe Fosu.

It was Kaikai who had the game’s first chance. He poked the ball past Tom Lockyer inside the box and, from a very tight angle, forced home stopper Sam Slocombe to save a low shot with his legs.

Michał Żyro saw an effort blocked by the Rovers defence with six minutes played and, moments later, Slocombe could only parry a powerful Nicky Ajose shot behind for a corner.

At the other end, Ben Amos had to throw himself to his right-hand side to keep out an Ellis Harrison strike, which looked destined for the bottom corner, and with 21 minutes played the hosts went ahead.

Pearce attempted to head a high ball back to Amos but Bennett was able to pounce upon it and prod the ball beyond the Addicks goalkeeper.

Charlton looked for a quick response by winning a flurry of corners but every time Jake Forster-Caskey tossed the ball into the box a man in blue and white was there to head the danger clear.

With 36 minutes gone, Ajose went close to finding a leveller. Following some good link-up play between Aribo and Reeves, the ball made its way to the striker, who cut inside on the edge of a box before whipping a shot towards the corner that Slocombe tipped over his crossbar.

From the corner that followed, Aribo glanced a header goalwards – in similar fashion to his first goal against Rotherham on Easter Monday – but on this occasion it flew wide.

Amos made a comfortable save from a Bennett strike five minutes before the break and, on the stroke of half-time, the Addicks equalised.

A sustained spell of possession inside the Rovers half ended with the ball falling for Reeves. He set himself and whipped a low strike into the bottom corner, via a slight deflection, giving Slocombe no chance.

Harrison blazed the first shot of the second period off target and, like the opening 45 minutes, Charlton’s maiden chance would fall Kaikai’s way.

He drove into the box and jinked past his marker, only to see his shot at goal deflect back off him and out for a goal-kick.

Reeves stung the palms of Slocombe with a 20-yard drive on 53 minutes and when the clock hit the hour mark Żyro sent an angled chip over the top.

Wolves loanee Żyro was millimetres away from connecting with a pin-point Page cross shortly afterwards, as Charlton continued to probe.

Amos raced off his line to beat striker Harrison to long through ball from Bennett, in a rare chance for the hosts, and Addicks replacement Stephy Mavididi then curled a strike off target with nine minutes remaining.

Charlton came so, so close to taking the lead on 84 minutes. A Forster-Caskey corner was only cleared as far as Aribo, whose follow-up shot was cleared off the line. Pearce then had a go too, with his goal-bound strike also being hacked away from between the goal posts.

Four minutes of stoppage time were indicated at the end of the 90 and Aribo threatened to bag a dramatic winner for Charlton when he jinked his way into the box and unleashed a left-footed drive that was blocked by a man in blue and white.

That proved to be the final action as the clash ended all-square at Memorial Stadium, leaving the Addicks will all to play for in their final six games.