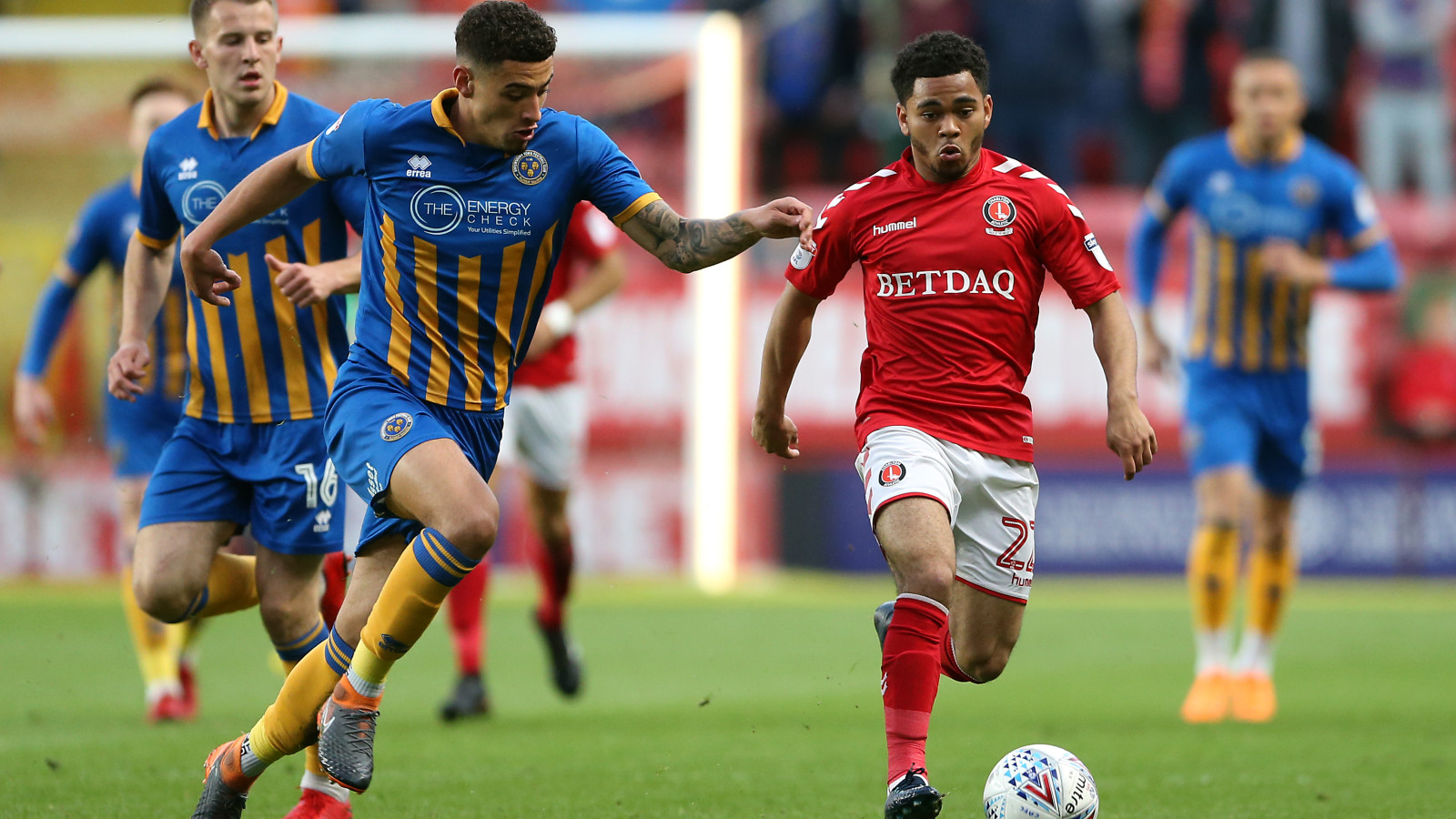 Charlton suffered a 1-0 defeat to Shrewsbury Town at The Valley in the first leg of their Sky Bet League One play-off semi-final on Thursday night.

A strike from Jon Nolan 10 minutes from time proved to be enough for the Shrews to take a slender lead back to Montgomery Waters Meadow, ahead of Sunday’s second leg.

The Addicks, though, are far from out of the tie and having already won in Shropshire this season, they will still believe that they are capable of turning the tie around.

Lee Bowyer made four changes to his starting XI. Nicky Ajose returned to the starting line-up at the expense of Sully Kaikai, who missed out on the match-day squad. Ben Reeves was swapped in for Mark Marshall, whilst Josh Magennis and Stephy Mavididi also started, replacing Michal Zyro and Joe Aribo. Tariqe Fosu was fit enough to take his place on the bench following an injury lay-off.

Both sets of players came out into a cauldron of noise as the Covered End tuned up their voices. The atmosphere was electric as The Valley faithful gave renditions of Valley Floyd Road and Lee Bowyer’s Red Army.

Charlton matched the cracking atmosphere as they took the game to Shrewsbury in the opening minutes, almost providing the Addicks fans with more to shout about.

With just three minutes on the clock, Mavididi skipped past his man and into the box, but his cross was inches away from Magennis. As the ball sailed over to the left, it was picked up by Ezri Konsa and he picked out the Northern Irishman and his header had Dean Henderson scrambling as it went narrowly wide of his left-hand post.

Jake Forster-Caskey then picked up the ball in the middle of the park and he drove towards goal. He elected to let fly from just outside the box and his low shot was tipped wide for a corner.

Shrewsbury had their first chance after six minutes, as Carlton Morris glanced a header straight at Ben Amos, before Ajose hit a dipping volley wide at the other end.

But despite their early dominance, the Addicks were indebted to Reeves with 17 minutes on the clock. From a corner, Paul Hurt’s men broke and Nolan picked up the ball on the left. He jinked his way into the box, before cutting back past Konsa and clear on goal. He shot, for what seemed a certain goal, but the former MK Dons man was there to deflect the shot wide for a corner.

Patrick Bauer then had a half chance after Magennis had knocked a cross into his path, but with a defender on him he could only turn and fire wide.

Shrewsbury grew into the game and Amos had to be at full stretch to push a Bryn Norris shot wide of his goal with 28 minutes played.

Charlton were playing some lovely football but couldn’t find the right ball and that killer touch. Forster-Caskey swept a lovely ball from the middle out to the right and Reeves crossed in, but it just evaded the lurking Magennis.

With five minutes until the break Mavididi used his skill to win a free-kick just outside the box on the right. Forster-Caskey’s ball in was glanced by Magennis at the near post, but no one else could get a touch as it sailed wide.

The home side continued to press and Ahmed Kashi hit a volley wide when teed up by Forster-Caskey from a corner. But, try as they might, the Addicks couldn’t find a goal as the two sides headed in goalless.

As the second-half started, the terrific home supporters were, once again, in fine voice as they tried to spur their men on. But the home side were being frustrated and the Shrews had a chance when Rodman headed straight at Amos, before the stopper did well to come and punch away a corner to clear the danger.

Nolan then curled a shot narrowly wide after being set-up up by Whalley. Fosu replaced Mavididi and he won a free-kick after spinning away from his man before being hauled down outside the box. Forster-Caskey stepped up to take the set-puece but he shot straight at Henderson. Ajose then teed up Reeves, but he fired narrowly over from just outside the box.

It was Shrewsbury who found their way to goal with ten minutes left. From the edge of the box, Nolan fired into the top-corner, via the bar.

The Valley stood up as one to rally their team and they almost got back on level terms when Ajose found the ball in the box but he shot just over. Jay Dasilva then did well to charge forward but after finding Fosu, who was tackled, his cross into the box evaded everyone and went behind for a goal-kick.

Charlton thought they had levelled the tie when Forster-Caskey swung in a free-kick and Magennis headed towards goal, but Henderson was equal to it.

Charlton couldn’t find that elusive goal and the Addicks have it all to do in Shropshire on Sunday if they are to make the play-off final at Wembley.