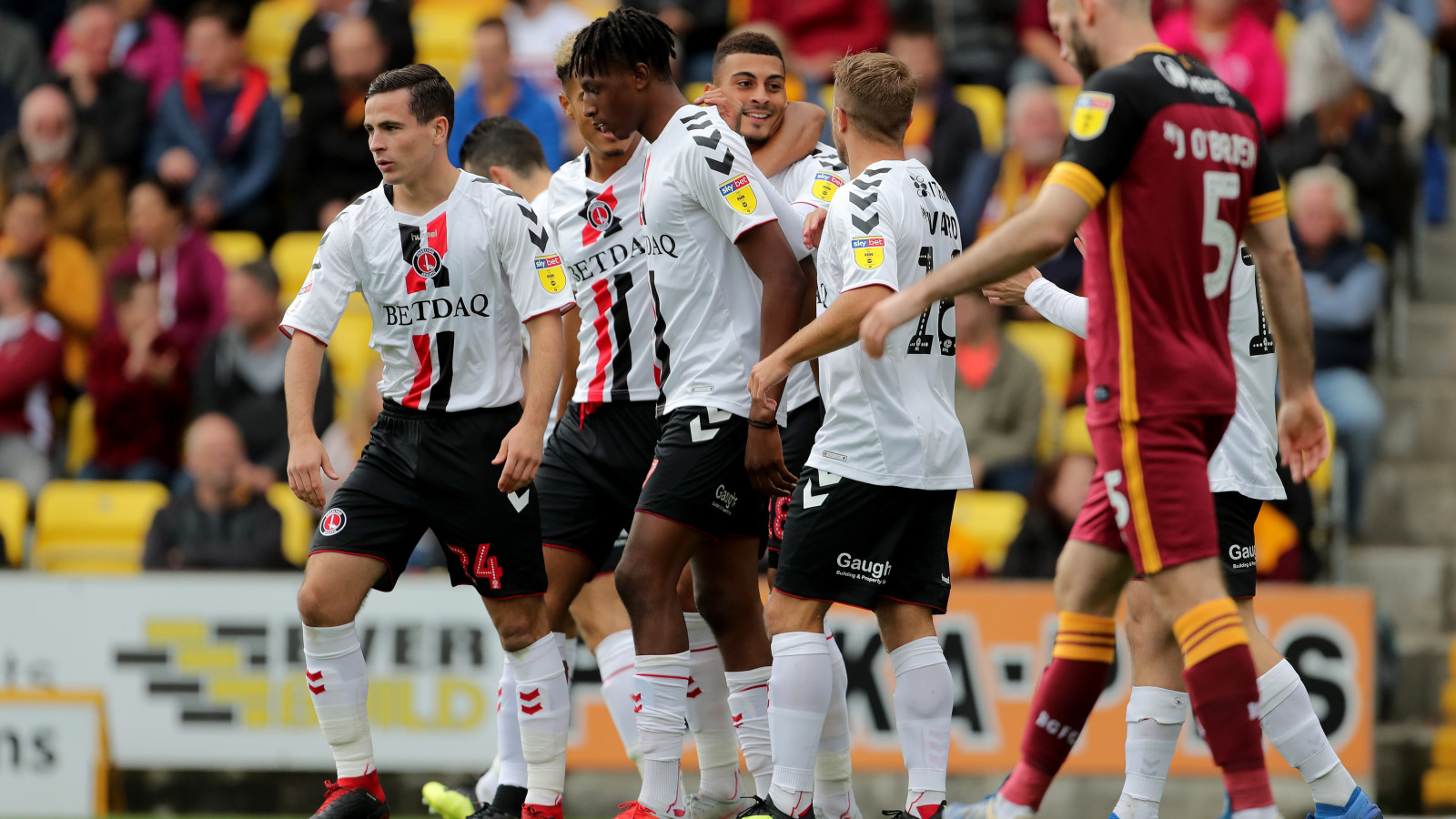 Karlan Grant and Lyle Taylor continued their fantastic form by hitting the net as Charlton beat Bradford City at the Northern Commercials Stadium on Saturday afternoon.

The front two – who have combined superbly since the beginning of the season – netted either side of half-time, with Grant’s opener arriving after just three minutes.

Taylor’s clincher was equally as eye-catching and made the result safe, earning Lee Bowyer’s men their third successive victory in Sky Bet League One.

In terms of team news, Lee Bowyer made three changes to his starting XI, which involved handing a debut to Nottingham Forest loanee Jamie Ward.

Fit-again Ben Reeves and Josh Cullen, back from international duty, were also called into the starting XI, and the trio formed part of a midfield diamond that was completed by Joe Aribo.

The same back five – including stopper Jed Steer – that started against Wycombe Wanderers last time out were called upon again, as were in-form front pairing Karlan Grant and Lyle Taylor.

Bradford did not touch the ball inside the opening minute but, when they did get possession, they wasted no time in creating a chance. Sean Scannell got to byline and whipped in a low ball that Eoin Doyle diverted goalwards, forcing Steer into a brilliant, instinctive save.

It was a great chance to have broken the deadlock and they were made to rue it almost immediately. Ex-Bantam Cullen threaded the ball down the left to Grant and after breaking into the box he cut back onto his right foot before whipping a great shot into the far corner.

That made it three league goals for the season for the Addicks academy graduate and he quickly went in search of number four but, on 10 minutes, a Ward cross was unable to find him.

Aribo saw a strike blocked on 24 minutes, as the Addicks continued to threaten, and at the other end the same man then did superbly to stifle a Bantams counter attack.

Taylor zipped a half volley inches wide, having latched upon a knock-down from Grant, with 28 minutes on the clock and 60 seconds later Charlton should have doubled their lead.

Ward switched the play out to Aribo and he drilled in a low cross that Grant could only turn over the crossbar with his left foot.

The Addicks were bossing proceedings and they went close again on the half-hour when Ward curled in a cross that was only half cleared before seeing a follow-up shot well blocked by the Bradford back-line.

Bowyer’s men deservedly led at the break but the first opportunity of the second period would go the way of the hosts. Jack Payne sent an in-swinging free-kick into the Charlton box but no-one in claret was able to get their head to it.

Another Payne set-piece, this time a corner, gave the Addicks something to think about just before the hour mark but they managed to hack it clear from inside their six-yard box.

On 67 minutes, the hosts appealed for a penalty when Ryan McGowan went down inside the box from a Payne corner but referee Jeremy Simpson said no.

The lack of decision incensed the home crowd and only added to the ever-increasing noise levels inside of Valley Parade. The home fans were almost silenced on 77 minutes when a Cullen free-kick whistled just wide.

Addicks substitute Igor Vetokele stung the palms of home goalkeeper Richard O’Donnell with a low drive 10 minutes from time, and the Addicks would soon double their lead.

Leading scorer Taylor picked up possession on the edge of the box and shifted the ball onto his right foot, just as Grant had for the opener, and rifled a stunning effort into the top corner.

It was a peach from the Addicks’ number nine – his fifth for the club – and his most eye-catching to date. From there, Charlton continued to defend superbly, just as they had done since the beginning of the second period, restricting the hosts to little or no chances.

Five minutes of stoppage time were indicated but the battling Bantams, who to their credit never gave up, were unable to breach the dogged Charlton rearguard as they returned to London with three more points.