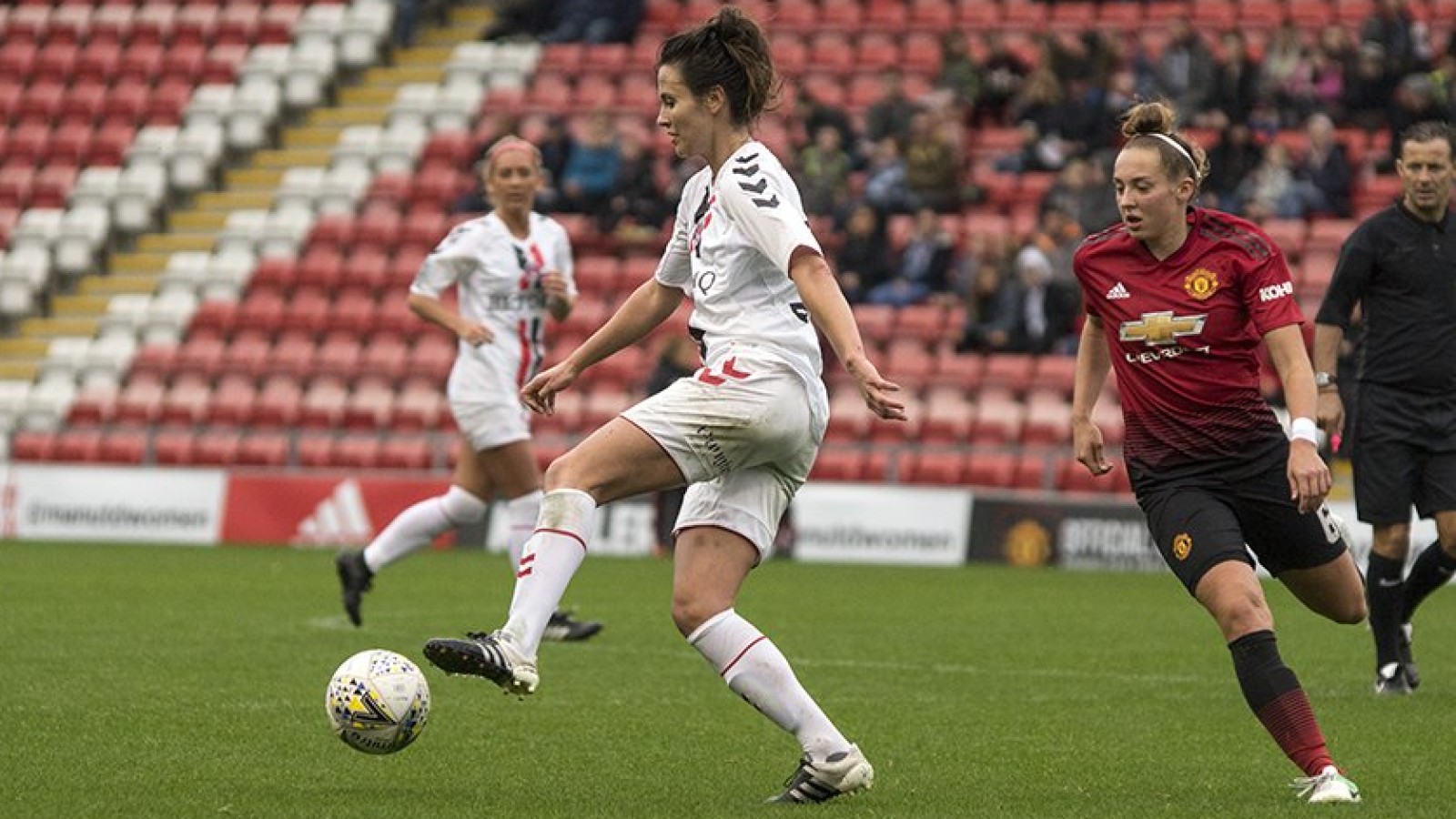 The Charlton women’s team suffered their first defeat of the season despite a spirited performance, losing 3-0 to FA Women’s Championship leaders Manchester United at Leigh Sports Village on Sunday.

A first-half strike from Katie Zelem and second-half goals from Jess Sigsworth and Lizzie Arnot ensured the Manchester side went home with the three points.

An early chance for United came from a third minute corner, with Amy Turner glancing a header over. Charlton had an early opportunity of their own, with Ellie Bailes collecting a poor clearance and shooting from range, but Siobhan Chamberlain saved.

The Addicks defended well, restricting the hosts in the most part to long-range efforts on goal. Zelem was the main protagonist on that front, with Katie Startup being equal to most she threw at her.

But the England U19 international didn’t have much of a chance when, just shy of the half hour mark, Alex Greenwood played a ball into Zelem. The former Juventus midfielder was allowed time and space to turn and curl a shot past Startup and put her side a goal to the good.

That’s how it stayed until half time, although the home side had the ball in the net for a second time on 25 minutes, but it was disallowed for offside. Kirsty Hanson and Mollie Green had further long-range efforts for the Reds.

Charlton were inches away from going into the interval on level terms. Gemma Bryan did well on the left flank to hold the ball up, muscle her marker out the way and stand a cross up to the far post. But the pass was a millimetre too high and the stretching Elizabeta Ejupi could only nod it onto the crossbar.

Ejupi looped a long-range effort into the stand behind the goal to get the second period underway, with Startup collecting a Greenwood header shortly after.

The real sucker punch came in the 57th minute, when Sigsworth met a cross with a header that cannoned back off the woodwork. The striker was alert enough to nod the follow up against the crossbar yet again, before slamming the second rebound past Startup to double her side’s advantage.

Lily Agg and Kit Graham were both deployed from the bench just after the hour mark. Graham wasted no time in trying to test Chamberlain, but her snapshot from an acute angle could only find the side netting.

With quarter of an hour remaining, a lapse in concentration from Charlton allowed Hanson too much time on the ball. The winger’s centre was turned goalwards and Arnot was on hand to poke home after Startup had saved the initial effort.

That was how it was destined to stay, with Ejupi seeing a lob land wide of the target and Charlotte Gurr having a 25-yard free kick blocked by the United wall.