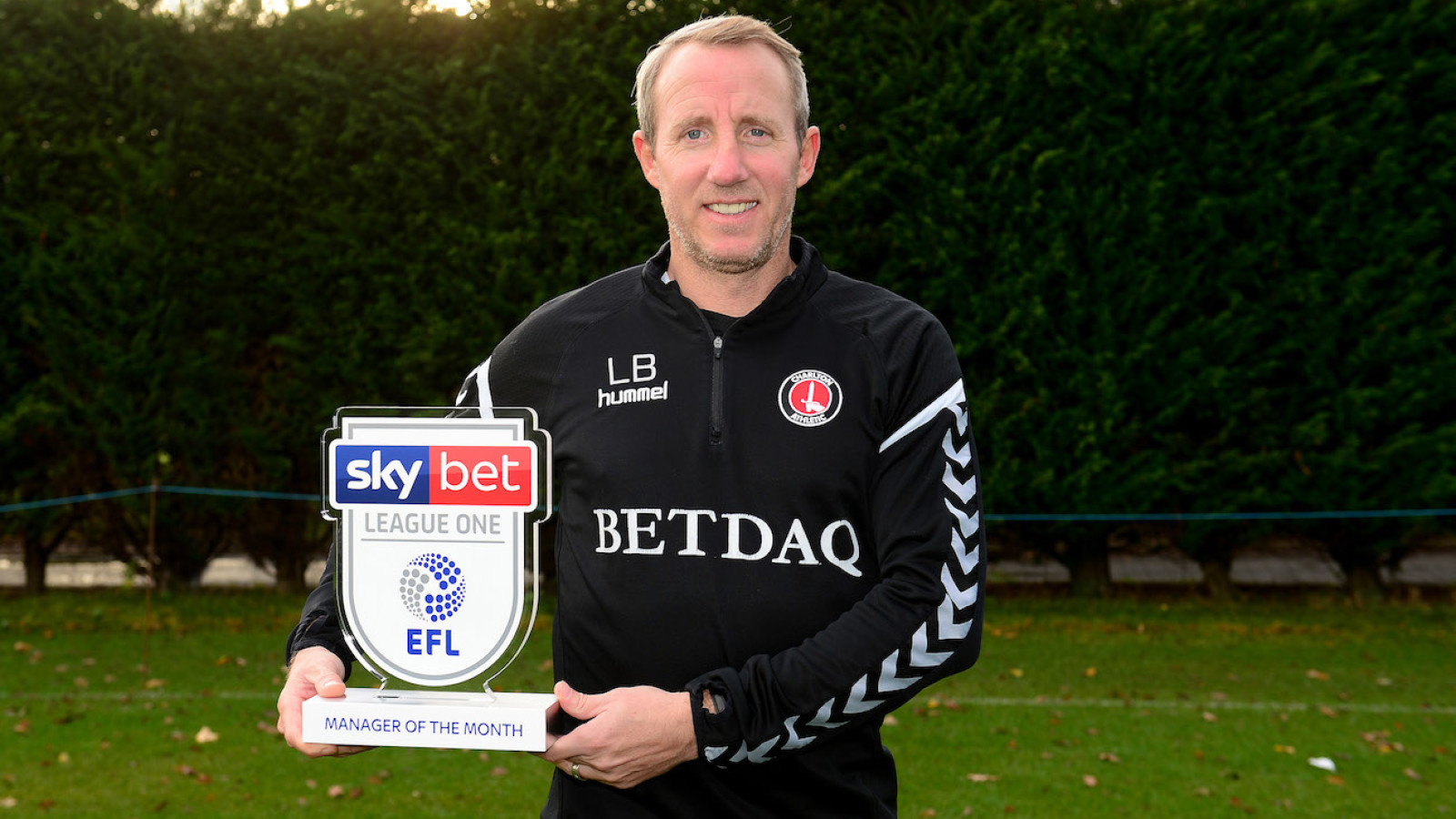 Addicks boss Lee Bowyer praised his players, the Charlton faithful and his staff after being named Sky Bet League One Manager of the Month for November.

The month saw Bowyer lead his side into the play-off positions with four wins from four league games.

Bowyer becomes the first Addicks manager to win the award since Chris Powell in February 2012.

He said: “Obviously I am chuffed to have won something so early on in my managerial career but a lot of it goes down to the players, not me.

“They are the ones out there putting their bodies on the line for me. Yeah, we work hard every day but it is the matchdays that count.

“To go and win four in a row, unbeaten in the month, I have to say it’s the players and the fans.

“Tuesday night away to Burton, that was tough for us and the fans didn’t stop singing, so they are part of this. Everyone to do with the club plays their part. Obviously I’m the lucky one that gets the trophy but it’s everybody. Everybody puts a shift in, everybody has an input. The analyst Brett (Shaw), Jacko is obviously a big part of this, Marshy (Andy Marshall) the keeper coach, the physios, you’ve got everybody. It’s a good thing for the club to be receiving something like this.”

The Addicks conceded just two league goals in the four league games in November, scoring nine on their way to the perfect 12 points.

Bowyer was impressed at the different ways his team had won during the month.

He said: “We’ve been good at home. A great result and a great performance against Doncaster. Then a very professional result and performance against Walsall. Bristol Rovers was a difficult game and then you go to Burton, where we didn’t play that well, they were better than us on the night but we came away with the three points. They are the ones that get you the promotion. Now we have to go again and we’ve got another month. I’ve said to the lads ‘It’s going to be harder than last month. Can you carry on this run? Can you go five, six, seven, eight games unbeaten?’.”

November was the second time this season that Bowyer has been nominated for the monthly accolade, having been shortlisted for the award in September. That month the Addicks picked up 13 points from a possible 15.

For now though Bowyer is focused on Saturday’s game away to Blackpool: “It is going to be tough and then to turn it around and go to Portsmouth on Tuesday. We’ve got so many injuries at the moment it’s crazy. We’ve just lost Wardy (Jamie Ward) now for three-four weeks. It’s just the way it is, we’ve got to dig deep. It’s going to be tough but I believe in them.

“I said to them last month ‘Can you go on a run? Can you win your four/five games on the spin like we did a little while ago and get ourselves back into the play-off positions?’. They’ve done that. Now we’re going into December I’ve said ‘Can you do that again?’. It’s going to be tough but I believe they can. I believe we have a bit of everything. Last season there was no way we’d have gone and won at Burton on that Tuesday night. It wouldn’t have happened. I said at the beginning, yeah we can play but we can also mix it. We can stand up and be counted and compete. I think we have the full package but it’s going to be tough.”

He said: “Lee is building a side that is working very hard for each other and is very difficult to beat.

“They have pushed their way up the table into a play-off position and will be hoping to keep their momentum going.”

Sky Sports’ EFL pundit Don Goodman said: “The fans still remember him as the schoolboy who made his name at the Valley in the 90s before getting his move to Leeds and there is a perfect symmetry to his managerial career starting in such a positive manner at the same club."

For more information and to purchase a half season ticket, please click here.