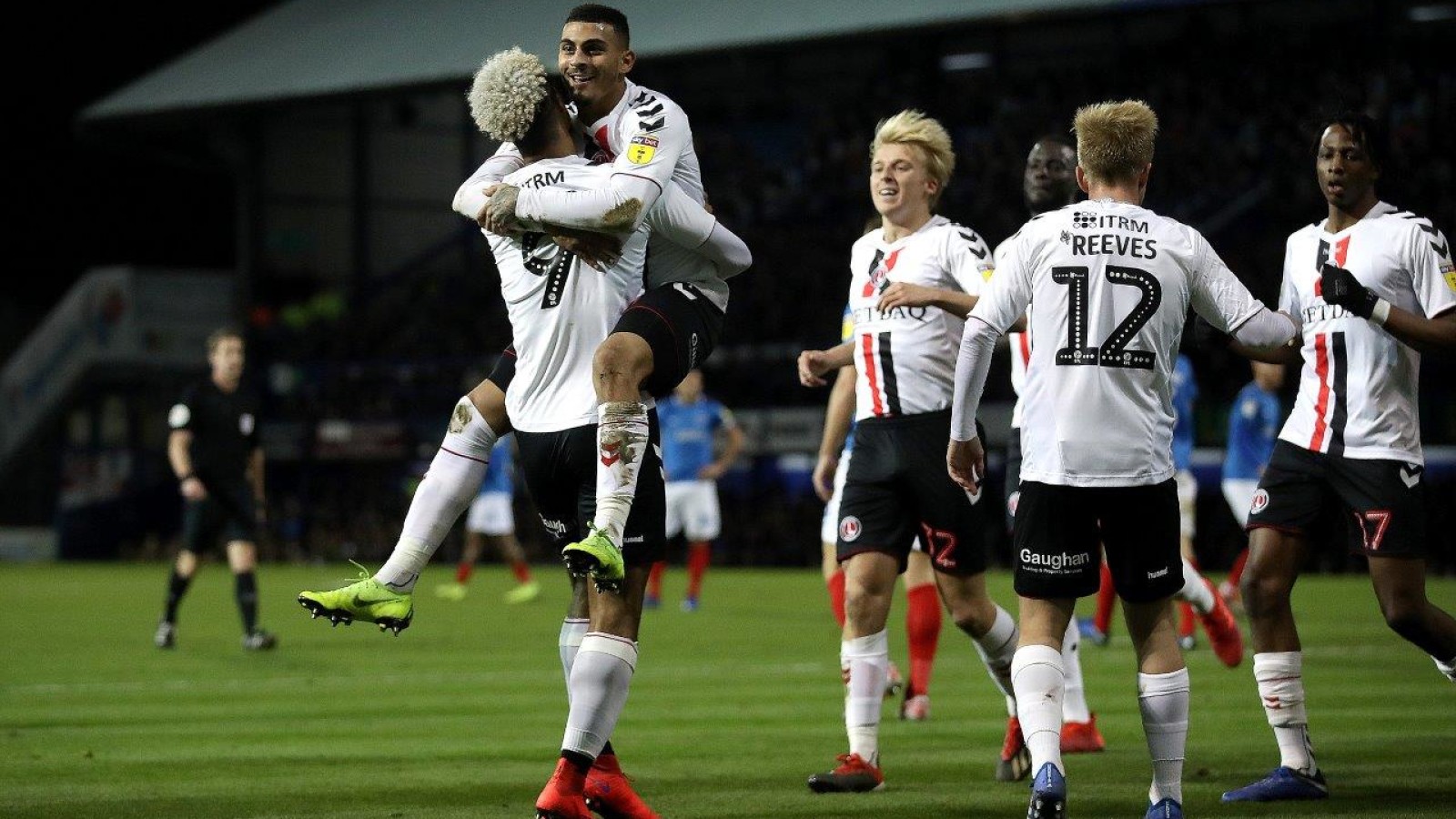 Charlton made it five wins from their last six Sky Bet League One matches by putting in a superb performance to beat league-leaders Portsmouth at Fratton Park on Tuesday night.

Karlan Grant and Nicky Ajose struck first-half goals to put the Addicks in control and after the break they defended brilliantly to keep the automatic promotion chasers at arm’s length.

Pompey did pull one back through Andre Green on 88 minutes but Charlton successfully negotiated six minutes of stoppage time to hold to their more-than-deserved three points, having absorbed a barrage of second-half pressure.

In terms of team news, Manager Lee Bowyer made three changes to his starting XI from Saturday’s game at Blackpool, with Naby Sarr, Anfernee Dijksteel and Ben Reeves coming into the side.

They replaced Toby Stevenson, Chris Solly and Tariqe Fosu, who all dropped to the bench, as the Addicks kept faith with the midfield diamond system.

The south-east Londoners created the game’s first chance on seven minutes. A determined run forward from Grant ended with him finding Reeves, who curled a strike over the top from the edge of the box.

Ronan Curtis trickled a strike into the Charlton side netting on 15 minutes, in what was Pompey’s first sight of goal, and Charlton then carved out a decent chance to break the deadlock.

Grant rose highest to flick on a Patrick Bauer clearance, Lyle Taylor pounced upon it and his corner-bound strike was well saved by home goalkeeper Craig MacGillivray.

The game was adopting an end-to-end feel and Portsmouth’s Curtis hit a strike straight at Jed Steer in the 21st minute. Two minutes later, the Addicks grabbed the lead.

A brave header from Joe Aribo saw him find Taylor on the right and his low cross-shot was diverted home at the far post by Grant. The academy graduate was at full stretch to reach the ball and he was rewarded with his 11th goal of the campaign.

Prior to finding the net, Grant had needed treatment for an injury and the Addicks were dealt a blow 10 minutes before half-time when the goalscorer had to come off.

He was replaced by Ajose – who of course bagged the Addicks’ winner at Fratton Park last season – and two minutes before the break he rippled the Pompey net again.

Some incredible determination from George Lapslie on the right wing saw him dig out a cross that Taylor flicked on and Ajose arrived right on cue to volley home from close range.

It gave the Addicks a two-goal cushion, one they’d take into half-time, and Pompey took just 20 seconds to aim their first effort of the second half at goal. Gareth Evans’ curling drive sailed well over, however.

The hosts had started the second half on the front foot but Charlton could have made it three on 52 minutes when Ajose fired wide from 18 yards, having been found by Krystian Bielik.

At the other end, Jamal Lowe shot over from a tight angle and, on the hour mark, Lapslie made a fantastic block with his face to clear a Matt Clarke header off the line.

Pompey were piling on the pressure and Evans was next to go close with 70 minutes on the clock. Lowe sent in a low cross from the right and Evans met it with a first-time strike but a combination of Pearce and Steer managed to prevent it from hitting the net.

On 76 minutes, Pearce excelled himself again. This time he got his head in the way of a Pitman strike to deflect it over the crossbar.

In a rare second-half effort for the Addicks, Taylor saw an angled drive blocked by Jack Whatmough but the action then quickly returned to the other end of the pitch, with Lowe seeing a shot saved by Steer.

Pompey halved the deficit two minutes from time. Lowe was the creator as he got down the right and drilled in a low cross that substitute Green turned home from six yards out.

The goal got the Pompey crowd on their feet and the noise levels increased further when six minutes of stoppage time were indicated.

The hosts were throwing everything at the Addicks and four minutes into added on time Ben Thompson launched himself into a tackle with Taylor that referee John Brooks deemed worthy of a straight red card.

On first glance, it looked a harsh decision on the Pompey man but it enabled the Addicks to wind the clock down a few more seconds and they held out for four more minutes of stoppage time to record a huge three points and return to the play-off places.