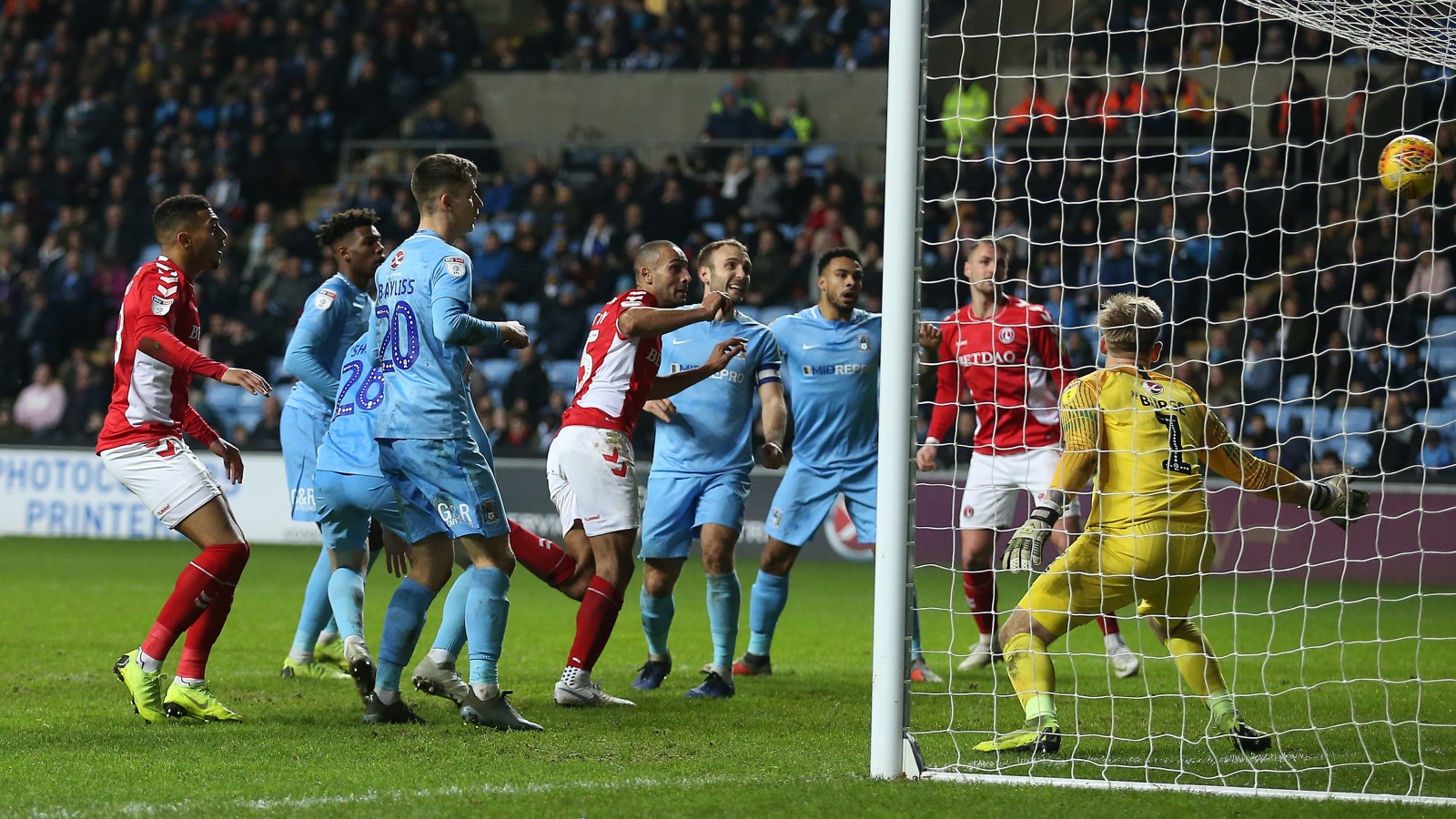 Charlton’s three-match winning run in Sky Bet League One came to an end on Boxing Day as they fell to a late defeat at Coventry City.

Darren Pratley had headed a second-half equaliser for the Addicks – following Jordy Hiwula’s first-half opener for Coventry – and the match looked destined for a draw until Tom Bayliss squeezed home a 90th-minute winner for the hosts.

The defeat puts a dent into Charlton’s promotion push and they will now be looking to return to winning ways when they travel to Barnsley on Saturday, December 29th.

In terms of team news, Lee Bowyer made one change to the XI that started Saturday’s win over Gillingham, with Pratley coming in for Joe Aribo, who missed out with a knee injury.

The Addicks started fairly brightly and almost created a good chance on three minutes when Krystian Bielik chipped the ball forward for Lyle Taylor to chase, but his pass just had too much on it.

Tariqe Fosu failed to find Nicky Ajose in similar fashion shortly afterwards and, at the other end, Conor Chaplin flicked a Dujon Sterling cross wide, in what was Coventry’s first shot at goal.

On 18 minutes, Bielik headed a Ben Reeves corner wide and moments later Luke Thomas fired a low strike into the side netting for the Sky Blues.

Charlton came close to breaking the deadlock with 23 minutes on the clock. Reeves broke through a Coventry challenge and found Nicky Ajose in the box and only a last-ditch tackle from Jordan Willis denied him a clear shooting chance.

The game was beginning to stretch and the hosts were next to go close on 25 minutes. After Patrick Bauer was penalised for a foul on Hiwula on the edge of the box, Chaplin thumped an effort goalwards that Jed Steer tipped over the crossbar.

The Addicks were next to go close. A Pratley cross was headed down by Bauer – who had ventured forward from the back – and his knock-down eventually fell for Taylor and his first-time strike was tipped away by Burge.

That save proved important as Coventry took the lead on 41 minutes. Chaplin chipped a cross into the box and Hiwula glanced it home with a good header.

The Sky Blues held a one-goal lead at the break and, before the second period got started, Bowyer introduced fit-again Karlan Grant in place of Ajose.

The substitution almost had the desired effect within five minutes of the restart. The striker headed at goal from a Reeves free-kick but his effort looped into the air before being nodded back across goal by Bauer, who was stood offside.

The Addicks would level on 58 minutes. Substitute Mark Marshall whipped a dangerous free-kick into the box that Bauer nodded back into the mixer and Pratley was well placed to head home.

It was the experienced midfielder’s first league strike for Charlton and it gave his team some much-needed momentum.

They quickly went in search of a second goal. Marshall broke down the right and found Grant, who reached the byline before seeing his cut-back well held by goalkeeper Lee Burge.

Fosu stung the palms of Burge with a rasping drive with 20 minutes to play and Marshall, who had made a difference since his introduction, then had a strike deflected over the crossbar.

Taylor broke clear for the Addicks 10 minutes from time, following a mis-placed header from Willis, but the Coventry defender recovered well to win the ball back for his team.

Bayliss sliced a strike wide for Coventry on 87 minutes, as they applied some late pressure, and as the clock hit 90 the midfielder netted his side's winner.

Thomas broke into the box and found Bayliss, who squeezed out a low shot that rolled into the corner.

The Addicks must now dust themselves down and get ready for Saturday’s trip to promotion-rivals Barnsley.