Charlton at Wembley: A look at history 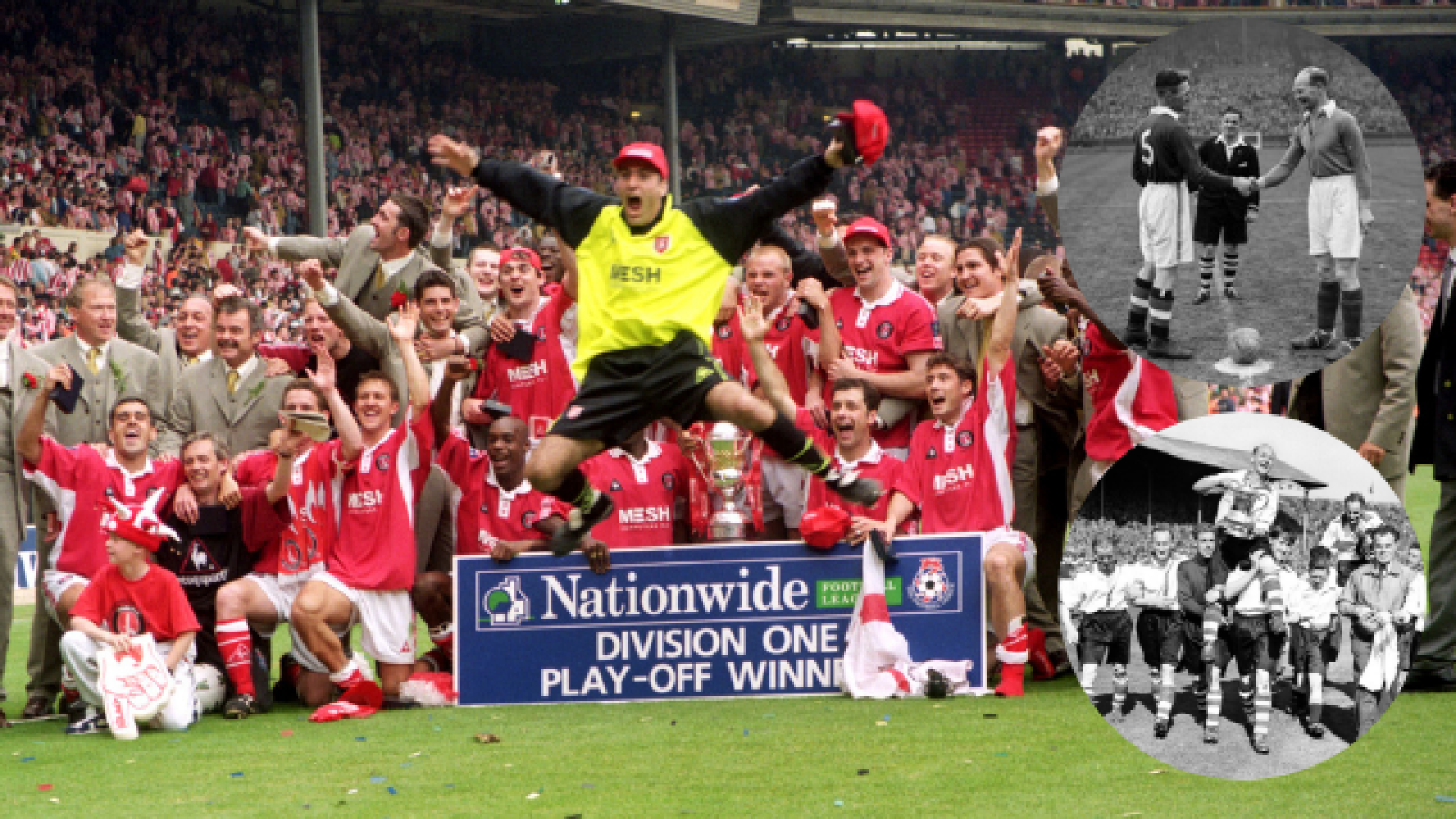 Charlton’s trip to face Sunderland in the 2018/19 League One play-off final on Sunday will be the Addicks’ first trip to the new Wembley but, the seventh trip to the national stadium in total.

We take a look back across our history at Wembley, detailing the matches we have played at the home of English football…

Charlton’s first ever trip to Wembley was far from a pleasant one. In 1943, Amidst the height of the Second World War, Charlton made their way to the War Cup final where they would face Arsenal. A crowd of 75,000 filled Wembley and would have read an unsettling message in the programme instructing people to retreat into the stadium in the event that enemy aircraft are spotted.

Arsenal started brightly and opened the scoring in the sixth minute through Reg Lewis before doubling their lead five minutes later when Leslie Compton fired home.

Charlton were given a lifeline back into the game when George Green converted his spot-kick after an Arsenal player was judged to have handled the ball in the area.

But there was to be no come back for the Addicks as Lewis was on hand to head home his second and Arsenal’s third.

Ted Drake made it 4-1 in the 26th before finding Arsenal’s fifth in the 40th minute. Lewis was then able to score his hat-trick in the 53rd minute before rounding up the rout in the 75th when he breezed past the Charlton defence and slotted low into the corner to make it a crushing 7-1 win for Arsenal over Charlton.

Charlton’s second attempt at Wembley, and at the War Cup, was much more successful than the first. The Addicks faced Chelsea in 1944 and things initially looked bleak for Charlton when Chelsea were gifted a penalty which Joe Payne duly fired into the bottom right corner.

Charlie Revell ensured that Charlton would not suffer the same fate as previously though, levelling things up for the Addicks four minutes later when he exploded through the middle and fired into the top-right corner.

Don Welsh put the Addicks in front when he was able to fire into the roof of the net among a Chelsea defensive mix up on 36 minutes. A minute later and Charlton had the game in the bag when Revell fired past the Chelsea goalkeeper, Vic Woodley.

General Dwight D. Eisenhower presented the cup to Welsh and the Addicks would go on to share the War Cup national final with Aston Villa following a 1-1 draw.

Charlton went into their first FA Cup final having beaten the likes of Preston North End, Brentford and Bolton Wanderers en route to the final where they faced Derby County.

98,000 people packed into Wembley to watch the Addicks and the Rams slug it out. Supporters would have to wait until the 85th minute for the breakthrough. An own goal from Bert Turner gave the Rams a lead and, with only five minutes left on the clock, many would have believed that would be the deciding moment.

However, in a villain-come-hero moment, Turner equalised for Charlton within 60 seconds with a venomous free kick which ricocheted off a derby played and into the net. The game would go to extra time.

Peter Doherty fired Derby back into the lead two minutes into extra time, when Sam Bartram could only parry an initial shot from a tight angle allowing for an easy tap in.

Derby took control of the game and gave themselves a two-goal lead in the 97th minute when Jack Stamps was able to break away and fire into the bottom left. Stamps would then put the game beyond doubt when he stretched to poke home Derby’s fourth. Charlton settled as runners up and would hope to go one better the next year…

After the previous year’s stumble at the last hurdle, Charlton would be hoping to get their hands on the trophy at the second attempt in the final. They faced Burnley in front of a crowd of 98,215.

Once again, the first half produced no goals and this time nor did the second. Charlton pressed hard but couldn’t find the breakthrough past a resilient Burnley defence.

For the second time in a row, Charlton would have to play 120 minutes of football as the game went to extra time. After the first 15 minutes there was still nothing to separate the two sides. With the second half drawing to a close it looked as though the final was destined for a replay…until Chris Duffy stepped up.

It was a case of right place, right time. Duffy was able to pounce on a Burnley goal-mouth scramble and leathered the ball into the back of the net to give Charlton a crucial lead.

Duffy’s goal was the difference and Jimmy Seed’s side joined an elite list of names to have won the prestigious FA Cup. Don Welsh was awarded with the trophy and lead the celebrations for what is arguably the greatest moment in the club’s history.

The Full Members' Cup was a competition formed for English clubs after their European bans following the Heysel Stadium Disaster.

Top-flight Charlton toppled the likes of Birmingham City, Bradford City, Everton and Norwich City to make it to the final at Wembley where they faced Second Division Blackburn Rovers.

A crowd of 43,789 cheered on Charlton and Blackburn with little to separate the two sides despite the difference in league calibre. Charlton had finished 18th in the First Division and would eventually have to fight for their top-flight status in the first play-offs. Blackburn, meanwhile, finished mid-table in the second tier.

Rovers looked the more likely to score but found their shooting boots missing, firing high and wide whenever the chance arose.

Charlton did form a number of chances but found themselves thwarted by goalkeeper Vince O’Keefe who was on hand to keep the Addicks at bay.

The game looked to be heading for extra-time again for Charlton at Wembley but with five minutes left to play, Blackburn broke down the right wing and forced Addicks stopper Bob Bolder to charge off his line to attempt to punch it clear. Bolder missed and the ball fell to Colin Hendry who slammed a volley into the open net to give Blackburn the title of the Full Members Cup holders for 1987.

Charlton’s minds may well have been elsewhere with a relegation battle raging on.

Billed as one of the best games of football to ever be played at the old Wembley, Charlton versus Sunderland was a true football thriller.

The two sides went head to head in the play-off final for the chance to play Premier League football. Sunderland had been relegated from the top flight the previous season and were looking to make an immediate return, while the Addicks had never played in the revamped top flight and were hoping to cause an upset at Wembley.

Sunderland had missed automatic promotion by a single point while Charlton finished in fourth place that season and so both sides had so much at stake resting on one game.

Clive Mendonca opened the scoring in the 23rd minute when he picked up the ball inside the box and turned his man before slotting low past Lionel Perez in the Sunderland goal.

The Addicks finished the half a goal to the good and would be hoping to see out the second half in similar fashion. However, five minutes after the restart, Niall Quinn was on hand to head home past Sasa Ilic’s near post and Sunderland were level.

Kevin Phillips would then put Sunderland in front for the first time in the match when he was able to peel off the Charlton back line and lob Ilic leaving the Londoners stunned by the comeback, but refused to be deterred.

Mendonca scored his second and Charlton’s equaliser on 71 minutes when he was able to coolly fire low past Perez. However, the excitement was only just beginning as two minutes later Quinn was on hand to drill his strike in from a difficult angle to restore the Black Cats’ lead.

It looked to be Wembley heartache for Alan Curbishley’s men but with five minutes left to play, up stepped Richard Rufus. Rufus, who had never scored for Charlton beforehand, rose highest from a corner and was able to place a header into the back of the Sunderland net.

Extra time followed and on 99 minutes Summerbee would once again change the course of the game. He drilled a shot low into the corner leaving Ilic with no chance.

No one had scored a hat-trick in a play-off final before, but that is exactly what Mendonca did on 103 minutes when he swivelled and poked past the keeper to ensure that the game went all the way to penalties.

Penalties were converted seemingly for fun and so sudden death was required to finally separate these two sides. Amazingly, no Charlton keeper had saved a penalty for six years up to this point and so it was fitting that that curse was lifted when needed most. Ilic dived the right way and was able to stop Michael Gray’s spot-kick and win promotion for Charlton in the most dramatic of fashions.

Valley Pass subscribers can get in the mood for Sunday's trip to Wembley with a host of features available on demand including episodes of Valley Stories with Clive Mendonca, Alan Curbishley, Sasa Ilic and Mark Kinsella, as well as the 1998 play-off final in its entirety.