Nigel Adkins on Palace draw: "I am really pleased with our spirit and togetherness" 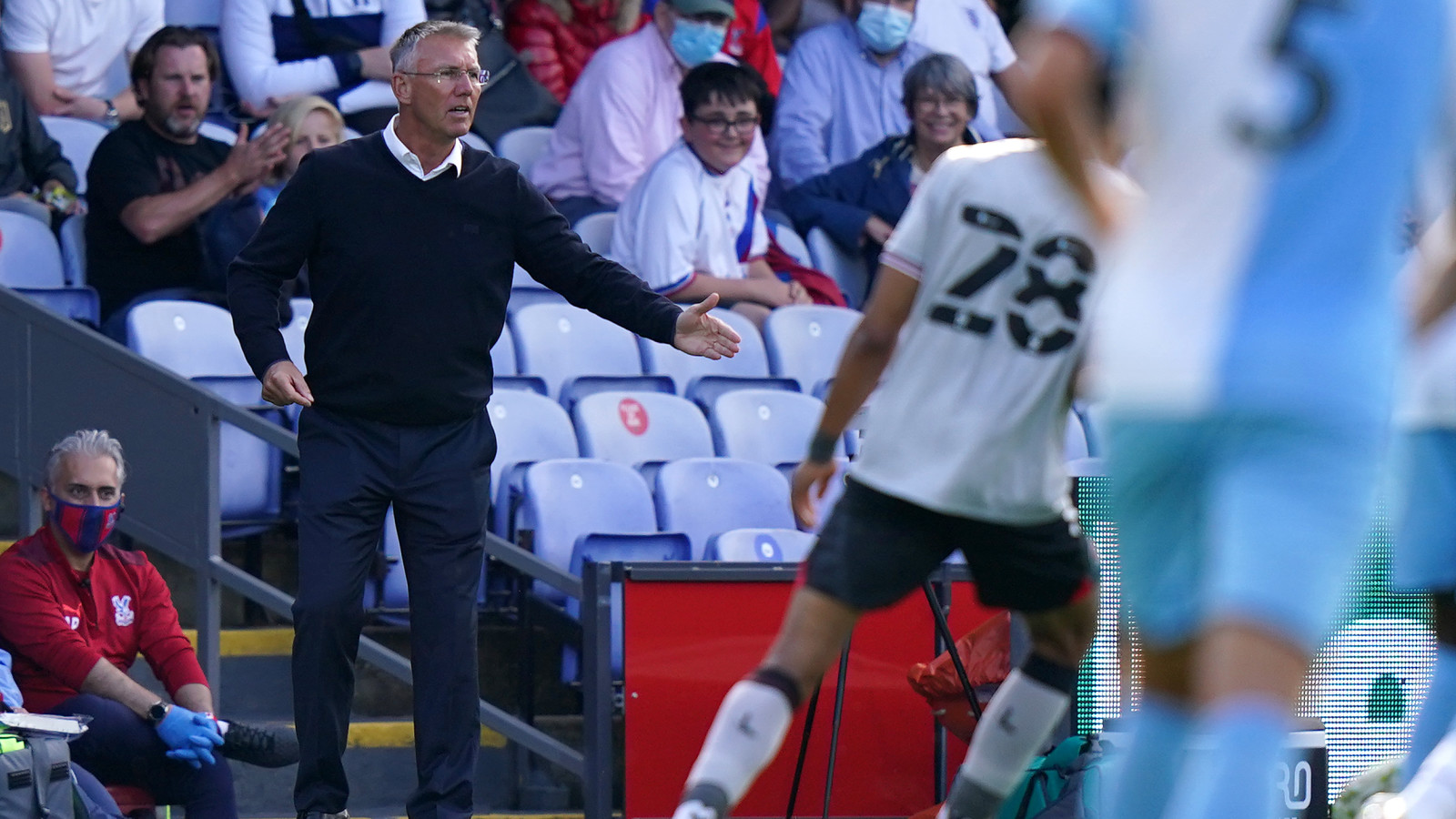 Nigel Adkins was thrilled with the showing from the Addicks’ youngsters in his side’s penultimate pre-season outing.

An excellent performance saw the Addicks draw 2-2 with Premier League side Crystal Palace at Selhurst Park on Tuesday evening, with several prospects catching the eye.

“I am really pleased with our spirit and togetherness. Same as the weekend, I was pleased tonight,” said Adkins. “I saw some good things. Obviously a group of guys getting more game time, that’s what we’ve talked about, things that we’re looking to implement. Again, some of the young players have done themselves the world of good as well.”

“I said to the players, ‘what’s the purpose of the game?’,” added Adkins. “We want to achieve something, so working through our KPIs, working through the fitness, a certain amount of game time for players and opportunities for others. I’m pleased that we scored from a corner, we’re a threat. It’s something that we work on. I’m really pleased with Sean Clare’s contribution from that point of view. Again, that’s a new midfield being put together and I thought they did really well in the first half.

“Obviously the opportunity in the second half for all of the young players. It was good. We talk about Jayden Stockley getting on the scoresheet now, really pleased with that and Josh Davison, again a great finish. A great strong, powerful run from Hady [Ghandour] and Charles Clayden as a front three. We’ve tried to be aggressive in our approach and I was pleased with the players there.”

The Addicks manager issued an update on Ben Purrington, who was forced off after seven minutes in Saturday’s friendly at Reading, and revealed he was impressed with Chris Gunter who deputised.

“I was very happy with Chris Gunter. We knew that going into the season both Adam Matthews and Chris Gunter have both played in the left-back position before, so I always knew that was going to be a position that we didn’t need to worry about too much. Young Jacob Roddy did well at the weekend and again he’s come on and got 20 minutes there. It’s obviously something we’ll talk about, we’ll look at, but I know that we’ve got Adam Matthews and Chris Gunter who can both play in that left-back position.”

As intended, Ryan Inniss was rested for the trip across south London, with the towering defender set to feature against Fulham this weekend.

“Totally planned,” explained Adkins. “He had a good training session at the training ground this afternoon, I was there watching him. He looks really, really good. It’s planned what we’re doing with him. The objective is he’ll get 60 minutes at the weekend against Fulham and again another good training session. If it goes to plan then we’re in a good position for the start of the season.

“I’ll be honest with you, we've got excellent medical staff. I must highlight Danny Murphy [Head Physiotherapist], he’s done a great job in managing Ryan [Inniss]. From the end of the season we had to be very sensible, he’d been out with a long injury and from our point of view we’re trying to do everything we can to make sure. He’s a big, big player for us this season. From our point of view it’s when the league games start, can we get as many league games out of him as possible. He’s in great nick at this moment in time but we have to make sure we get the loading as we progress through. It’s staged, it’s managed for a reason and I’m looking forward to him having a good season for us.”

Charlton conclude their pre-season campaign at Craven Cottage on Saturday, and Adkins admitted it has been a pre-season like no other as the Addicks prepare for the upcoming 2021/22 League One campaign.

“I think you’ll find that a lot of teams have had games affected, have had training regimes altered because of the COVID situation. You have to adapt to it; I think we’ve adapted very well and out of that has been some great opportunities for some of the young players. They’ve certainly taken that opportunity and we have to be ready to be adaptable.

“We’re still a long way away from getting out of this pandemic and from my point of view we’ve got to be adaptable and deal with the situations as they arise. We go into the Fulham game looking to get more game time into the players and then obviously at the start of the season against Sheffield Wednesday.”

“You want to make sure that they’ve still got that opportunity to play, but likewise it does highlight that we need to get the strength of the squad right. A couple of players have missed out today, [Alex] Gilbey and Ben Watson for example… Ryan Inniss and Ben Purrington, so there’s four that have missed out today. You’d like to think that that certainly adds strength to the squad of players that we’ve got.”