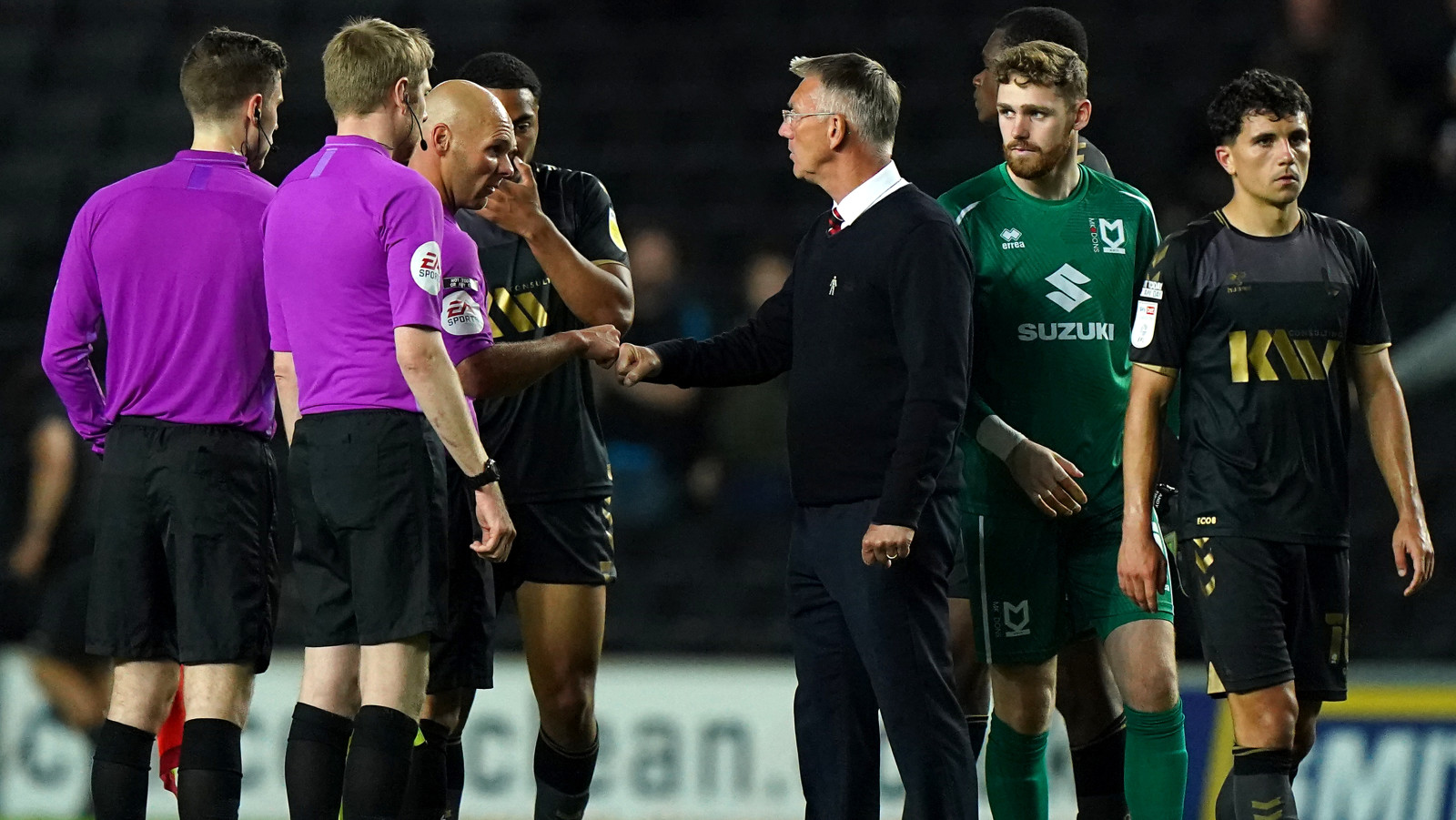 Nigel Adkins has delivered his verdict on the Addicks’ 2-1 defeat at MK Dons on Tuesday night.

The Addicks led after 15 minutes through Jayden Stockley, though were pegged back by Troy Parrott before Mo Eisa bagged the winner in the second period.

“We know they are an excellent passing team out from the back, we wanted to press them from the front all the way through. Jayden Stockley, the keeper has made a great save from him just before half-time. Again, that could maybe change the complexion. For me they were better in the second half, where they got the flow of the game. Although I wanted to go and press them all the way over, we weren’t able to go and do that as well as I wanted.

“Likewise, there was space for us when we did get the ball. Could we get it to the outlet - i.e. the two full-backs with their formation. We could have got our two full-backs on the ball and, likewise, have got two wingers then to get them on the ball. We didn’t do that enough. DJ [Diallang Jaiyesimi] I thought was very good in the first half. Obviously we’ve introduced Charlie Kirk there - a little bit earlier than I wanted to but with Conor Washington going off injured... which is a big shame because Conor has been doing well.

“They got the momentum of the game. They are a very good passing side, their formation is very good. You saw a similar thing to the way Wimbledon go and play with three at the back, the box in midfield, a bit of pace and the width comes from the two wing-backs. They did very well on an excellent pitch to go and pass it. Then they got the flow of the game. We wanted to press, that’s very energetic to go and do that. The players work hard, but unfortunately we fell short today in the second half performance really. Well done to them, because for me they acquitted themselves better than what we did.”

Adkins was pleased to see Deji Elerewe make his Addicks league bow, having impressed throughout pre-season.

“Listen you talk about positives, you’ve got a young 17-year-old, who has done brilliantly all the way through pre-season,” added Adkins. “I thought he was exceptional today. First couple of minutes he’s got a sliding tackle challenge in there. It was a great tackle he made on the halfway line, he won headers, he’s got a good range of passing in him. At 17 the future is very bright for him and he wasn’t phased at all, so delighted with that.”

The Addicks manager also provided an update on Conor Washington, who limped off on 56 minutes, and Ryan Inniss, who was withdrawn at the interval.

“Well Conor Washington felt something go in his back,” revealed Adkins. “He said, ‘I felt as good as I’ve felt for a long time’, he was feeling really good. He said he’s just turned and he was struggling. Obviously he’s come off so that’s that one.

“Big Ryan [Inniss] - Ryan will be good for the weekend all being well. He’s done great because obviously we talked about last season and the minutes he had in pre-season to go Saturday, Tuesday, Saturday, Tuesday, so it was great that he’s managed the 45 minutes today. It’s a shame he got booked. I didn’t think he should have got booked, I thought it was a real good, honest challenge with two players going for the ball. And we’ve got one or two little knocks in there - Sean [Clare] was feeling something towards the end there as well.”