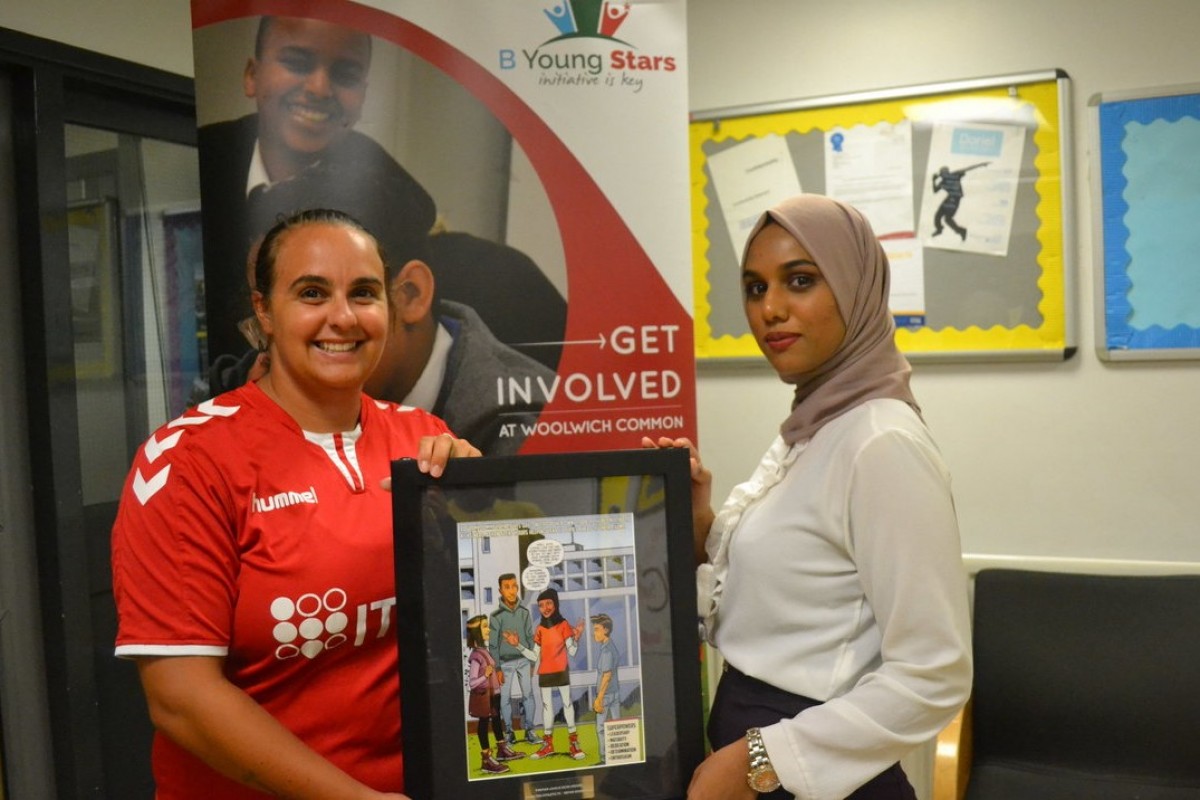 Thomas Tallis sixth form student Abyan Sharmarke first attended Kicks sessions at Woolwich Common Youth Hub in January 2015. In that time, she has become a leader and a role model to those around her, both on and off the pitch. When she is not playing football, Abyan can be found mentoring younger students, helping them to improve their English and Maths skills.

Abyan has overcome numerous challenges throughout her life. She took a year off from school after not receiving the GCSE grades she wanted. Instead of giving up, however, she signed up for private exams, getting a job to help pay for them. Because of this dedication, she received the grades she needed to get in to her first choice of sixth form.

Regardless of personal difficulties, Abyan has always put the needs of others above her own. In the lead up to her exams, she spent hours helping three other Year 11 students prepare for their English exam, despite needing to revise herself. All three students received high grades and attributed their success to Abyan.

Abyan’s patience, selflessness and passion are the reasons why she has become one of the most respected and admired participants of CACT’s Kicks programme and her dedication has been recognised by CACT, the club and the Premier League. Abyan’s story has been immortalised in a comic strip illustration designed by Marvel and DC Comics artist John McCrea. The illustration shows Abyan with the students she mentored on GCSE results day, celebrating getting into their chosen sixth forms.

A group from CACT’s Kicks programme recently travelled to Manchester to take part in the Kicks Regional Cup 2018.

“Kicks is more than just a football session, it’s a safe place where young people can meet up, socialise and, most importantly, learn. I have experienced the problems of our community first hand and that’s why Kicks has been so important for areas like Greenwich and Woolwich; it keeps young people off the streets and out of trouble.

“The best thing about having Abyan at our sessions is seeing the impact that she has on other participants. All the other boys and girls look up to her as a role model. Over the past year, between juggling her exams, volunteering projects and mentoring, we have seen Abyan develop into a mature young woman who takes pride in everything she does.

“Regardless of the difficulties that Abyan has faced, she is able to overcome any obstacle, which is testament to her passion and determination.
“Abyan is just one of the hundreds of young people that the Kicks programme has helped across London. Not only does it unite them through a love of football but it gives them hope, a sense of pride and a feeling of belonging.

“Everyone here would like to congratulate Abyan on being named Charlton’s Kicks Hero!”
Richard Scudamore, the Premier League’s Executive Chairman, said:

“Premier League Kicks delivers sessions for young people where they are needed most, connecting football clubs with their communities in a meaningful and sustainable way.

“The Kicks Heroes campaign allows us to highlight some of those inspiring individual stories – like Abyan’s – and celebrate their achievements and thank the 68 Premier League, EFL and National League clubs currently delivering the programme.”

Abyan's frame was collected for her by teacher Bibi Nubir.